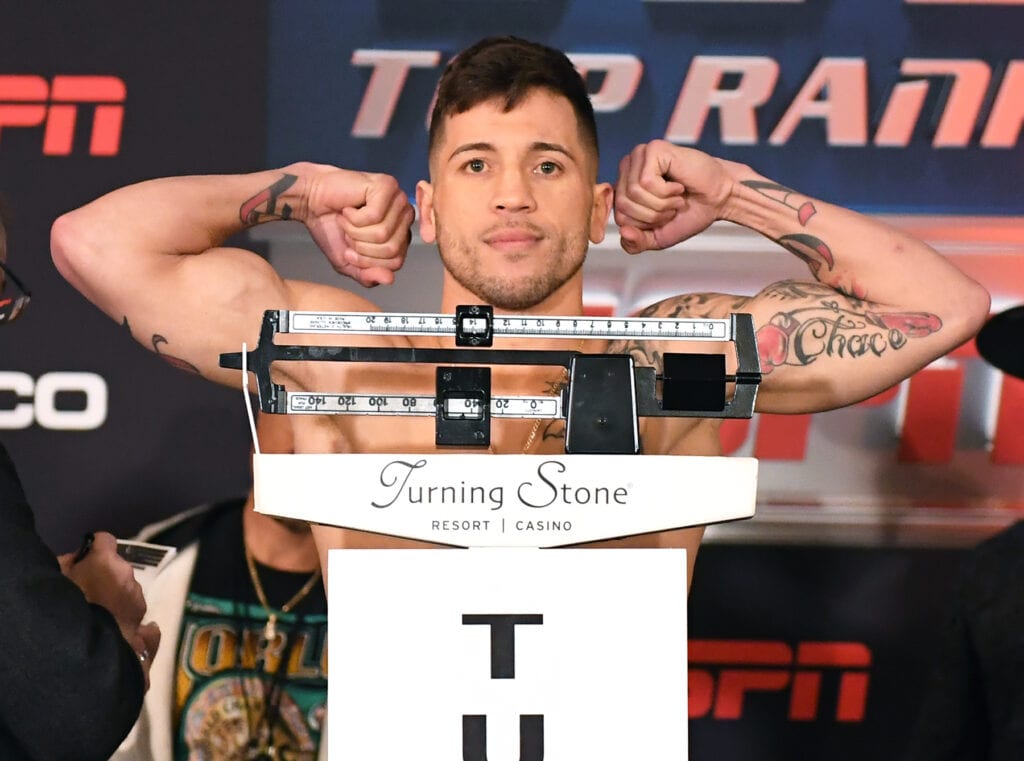 Sosa reflects on a long road in preparation for Rhodes

There have been tomes written about athletes who have hit the big time and ended up destitute. In the last couple years, Camden boxer Jason Sosa looked to be on his way to joining this unpopular club. Next month, the Puerto Rican faces a crossroads – become a footnote in someone else’s career or be on his way to becoming a two-time World Champion, with the world at his feet once again.

When he fights at Temple University’s Liacouras Center on August 10, he looks to secure a big opportunity — one that can undo the mistakes made when he was flush with cash after fighting one of the world’s biggest names, and get him out of from under the mountain of debt that has recently dampened his naturally optimistic spirit.

The super featherweight was an unlikely champion when he upset Javier Fortuna in 2016 to win the WBA Super Featherweight World Title. An amateur career that started when Sosa was 20 was set aside after only three fights. He made his professional debut at the storied Blue Horizon in Philadelphia in November 2009, knocking out Jonathan Ocasio in three rounds.

“I focused completely on boxing,” Sosa said, adding that he left his job at a pizza restaurant to ply his trade full time. “I would walk to the gym — it was a long walk. I didn’t care if it were snowing, raining, whatever. I was completely dedicated.”

He continued his rise, racking up nine wins, one loss, and three draws. Then, on August 19, 2013, the unthinkable happened.

“I started getting phone calls at 3:00 a.m., I was asleep. It was my sister and my mom calling. I knew what had happened. I didn’t ask any questions.”

Sosa raced to the hospital to find out that his sister, 31-year-old Mayen Colon, had been shot and killed, leaving behind two children, a devastated mother, Sosa, his older sister, and younger brother.

Sosa felt a responsibility to keep his family together. “I had to be the strong one. I cried a little but I had to let it go and focus on helping my mom. I almost lost her, mentally.” He was a month removed from his next fight, so he buckled down and focused.

“I fought Tyrone Luckey and knocked him out. After the fight, I dropped to my knees and cried. I broke down and let it all go.”

He would go on to amass a record of 17 wins, one loss, and four draws before getting the call from his promoter, Hall of Famer J Russell Peltz, that he would be fighting Fortuna in Bejing, China on June 24, 2016, for the WBA Super Featherweight Championship.

A video of the fight on youtube shows the moment that Sosa stopped the previously undefeated Dominican in the 11th round of a bout that saw Sosa surviving a 5th round knock-down. Sosa finished his prey with a barrage of punches, and Peltz, who had always believed Sosa would win, could be seen on camera, on his feet celebrating the stoppage.

“Jason’s win over Fortuna rates as one of the highlights of my career for many reasons,” said Peltz. “Winning any fight overseas in big, especially one where no one gave him a chance. Plus he was so far behind on points he needed a knockout to win. And it came in the latter stage of my career which was personally gratifying.”

Camden had a new world champion.

The next few weeks were a blur for the 28-year-old. He received a parade in his hometown of Camden and a key to the city. He defended his title in November of that year, winning a unanimous decision over the UK’s Stephen Smith in Monte Carlo.

Sosa was then offered the opportunity of a lifetime — a fight that would profoundly change his life professionally and personally in ways he couldn’t have known when he agreed to relinquish his WBA strap to fight top pound-for-pound fighter Vasiliy Lomachenko.

Lomachenko, who had only one loss in 397 fights as an amateur, won the gold medal for Ukraine in the 2008 and 2012 Olympics, and was on a path of destruction, winning every one of his professional bouts, except his second fight versus boxing veteran Orlando Salido.

? @JasonSosa4 returns to the ring to fight Haskell Lydell Rhodes as the #FramptonDominguez co-feature! Plus, Philly native @SonnyConto, the Top Rank and pro debut of Robeisy Ramirez, and @BerlangaEdgar on the undercard.

Sosa knew a win was a long shot, but the money was right, and he made it to the 9th round of a scheduled 12 with the future Hall of Fame boxer. The pain of the loss was dulled by his $350k purse.

“People in Camden were so excited for me,” said Sosa. “Just that I had shared the ring with a legend. Everyone was proud of me.”

With the money burning a hole in his pocket, Sosa, who had grown up in a working-class, single-parent household, hit the town, paying for his guests, and giving money to friends who asked for it. “I never expected to get anything in return. I always felt like money was the root of all evil. I didn’t care if I had it.”

Peltz did his best to try to caution the young fighter against spending his money. “I tried many times to educate Jason about his money but like most fighters who hit it big, he yessed me to death and went his own way. Hopefully, there still is time for him to get back into position to earn big money,” said Peltz.

“More than once I begged him to watch ESPN show 30 for 30 called “Broke” about all the athletes who blew their money but he never did.”

Shortly after the Lomachenko fight, Sosa took his younger son, who was just starting to walk and moved to Puerto Rico, where he’d spent most of his formative years. He partnered with fellow boxer Mikey Perez and opened Blazzin’ Hookah Bar & Grill. It was an ambitious effort, complete with walls decorated with murals painted by local artists and bartenders who performed fire-eating shows for the bar’s patrons.

Just after opening, Hurricane Irma hit the island, and while Blazzin’ made it through unscathed, the island was without power. Sosa hustled to keep his investment on its feet with a generator while his son toddled at his feet. Shortly thereafter, he received the call that he was to fight Yuriorkis Gamboa at the Madison Square Garden Theater in New York. He left Blazzin’ in the hands of a trusted associate and headed to the states to prepare for his bout.

On a trip to the Island to check on his investment, which to date had cost him around $80k of his earnings from the Lomachenko fight, Sosa found that his associate had taken his name off of the business and license paperwork for the establishment. Sosa looked on the bright side, and turned his attention toward Gamboa. “While I was gone, everything changed,” recalled Sosa. “There were people hanging out there, gangsters, people that I would never have allowed in. I was glad my name was no longer associated with it.”

“Someone was killed there recently. I think God is always looking out for me, because if my name had been on the business, it would have been bad for me,” said the fighter.

Sosa went on to lose against Gamboa via a controversial majority decision. “I won that fight. They robbed me against Gamboa. All but one of my losses, the one against Lomachenko, were taken from me.” Sosa won his next two bouts against Reynaldo Blanco and Moises Delgadillo, both via unanimous decision.

Now sitting at 22-3-4 with 15 knockouts, Sosa is facing a bleak financial situation. With his first daughter on the way, his priorities are different if he has an opportunity like the one he earned with Lomachenko. “I respect money now. I know who my real friends are. I am broke,” Sosa said, the word weighed with the hopelessness of financial destitution. “I know things will be different if I get another chance.”

Sosa has an opportunity to get himself back in contention for a world title when he faces Haskell Rhodes on August 10th. “I have a little girl on the way,” he says smiling and with excitement. “I love being a dad, and my family is my priority.”

“Haskell Rhodes is far from a tuneup,” said Peltz. “He has a difficult style and he never has been stopped. It’s a hard fight but if Jason wants to be champ again he has to pass this kind of test.”

With more than just glory on the line, Jason Sosa is focused on a second chance — a chance to show that he doesn’t belong in the long list of fighters that retire with nothing, and to provide a nice life for his family when retires for good from this brutal sport. Rhodes will be facing a man with the fire of redemption in his belly, and Sosa hopes he is planning accordingly.

Jason Sosa fights Saturday, Aug. 10, at the Liacouras Center on the campus of Temple University, and live on ESPN+. Promoted by Top Rank, in association with Peltz Boxing, tickets, priced at $100, $55 and $35 (not including applicable fees), are on sale now and can be purchased at the Liacouras Center Box Office and www.liacourascenter.com, or by calling Peltz Boxing at 215-765-0922.