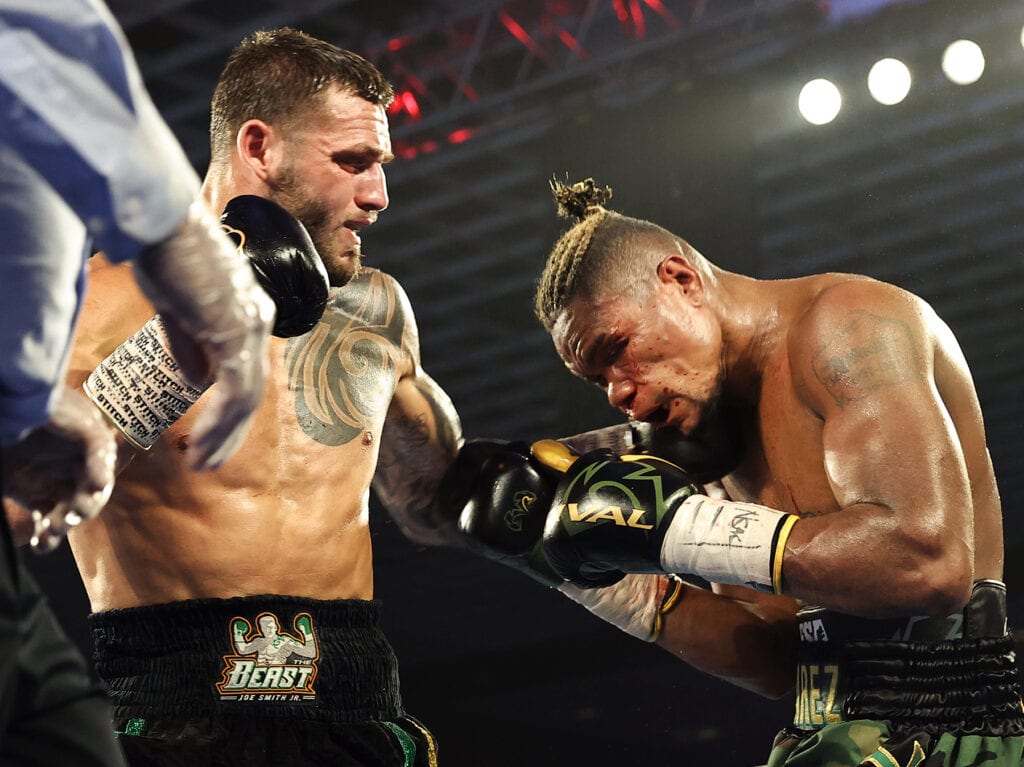 Smith-Vlasov Back On For April

Joe “The Beast” Smith Jr. and Maxim Vlasov are headed to the Sooner State to fight for the vacant WBO light heavyweight world title Saturday, April 10 at Osage Casino in Tulsa, Oklahoma.

They were originally scheduled to fight Feb. 13, but Vlasov tested positive for COVID-19 prior to the weigh-in, forcing a postponement.

In the 10-round co-feature, unbeaten heavyweight contender Efe Ajagba will take on Brian “MVP” Howard.

Ticket information for this world championship event will be announced shortly.

“Joe Smith Jr. deserves this opportunity, and I know Maxim Vlasov will give him a great challenge,” said Top Rank chairman Bob Arum. “The light heavyweight division is one of the hottest in boxing, and the winner will have no shortage of lucrative opportunities.”

Smith (26-3, 21 KOs), the “Common Man” from Long Island, hopes his 2021 kicks off where 2020 concluded. Last August, he broke through inside the MGM Grand Las Vegas Bubble, knocking former world champion Eleider “Storm” Alvarez out and through the ropes. Smith has won three straight bouts since his first world title opportunity in March 2019, a unanimous decision loss to Dmitry Bivol. He became a household name in boxing in 2016 when he knocked living legend Bernard Hopkins through the ropes and into retirement.

“I am extremely motivated after all I have been though in my career,” Smith said. “I am proud of all I have accomplished, and I am confident I will bring the belt home on April 10 and move forward with my goal of unifying belts and proving I am the best light heavyweight in the world.”

Said Joe DeGuardia, CEO of Star Boxing, “We all worked very hard to get Smith and Vlasov back in the ring as soon as possible, not just for the fans that love to watch the ‘Common Man’ fight, but for Joe, who is very anxious to become world champion. The blue-collar banger that is Joe Smith Jr. will be ready to fight and thrill the fans. He is laser-focused and fully intends on bringing the WBO world title to Long Island on April 10.”

Vlasov (45-3, 26 KOs), from Samara, Russia, is 3-0 at light heavyweight since moving down from cruiserweight, where he became a top contender and challenged for an interim world title. He had a banner 2019 at light heavyweight, knocking out the 14-1 Omar Garcia, avenging a previous defeat with a unanimous decision over Isaac Chilemba, and shutting out the 15-0 Emmanuel Martey over 10 rounds.

“I am ready to return to the ring and become the new WBO light heavyweight world champion,” Vlasov said. “The postponement was a minor setback, but it will be worth the wait when I have that belt around my waist.”

Ajagba (14-0, 11 KOs), a 2016 Nigerian Olympian, is one of world boxing’s most accomplished young heavyweights. At 26 years old, he’s already knocked out the likes of longtime contender Amir Mansour and former world title challenger Razvan Cojanu. He made his Top Rank debut last September and outlasted veteran Jonathan Rice via decision over 10 rounds. Howard (15-4, 12 KOs) is an 11-year pro who has split a pair of bouts since moving up to heavyweight. In August 2019, he knocked out 2008 Puerto Rican Olympian Carlos Negron in the first round.

Glowacki -‘I Will Retrieve My Belt’
Dignum, Azeez In Action In April
Advertisement
To Top