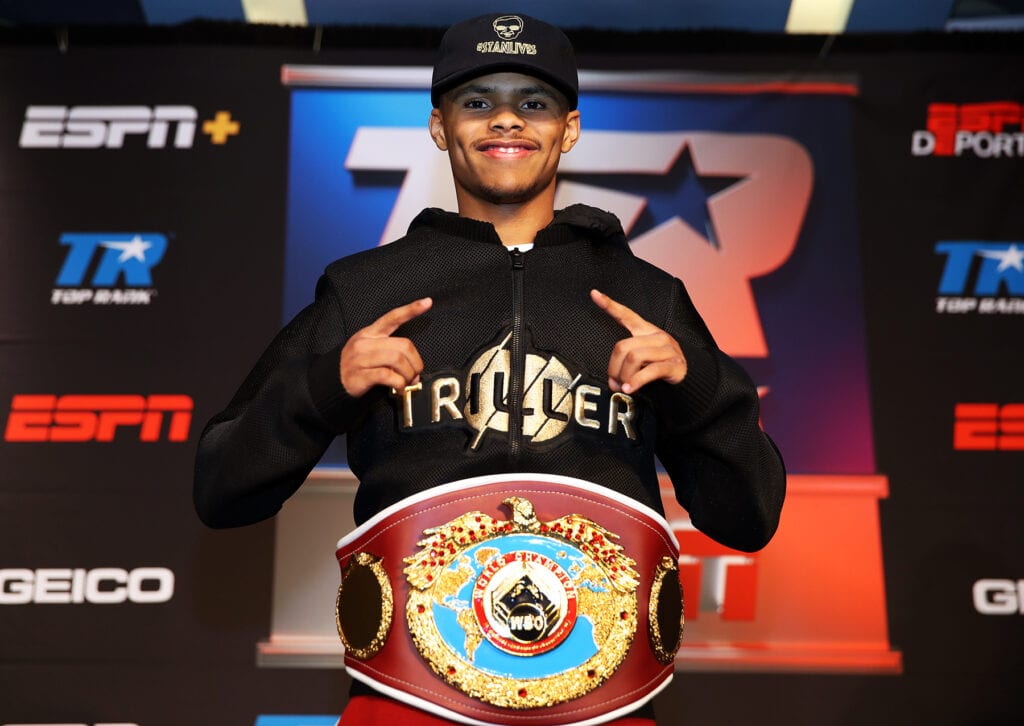 A report Wednesday from Boxingscene.com says that they’ve learned Stevenson will headline against Toka Kahn-Clary in a 10-round 130 lb. non-title fight for December 12th at the MGM Grand in Las Vegas,

That’s the night Top Rank had hoped to have the Miguel Berchelt-Oscar Valdez title fight for the WBC Jr. Lightweight belt. However, Berchelt tested positive for Covid-19 and that bout is off for now and may not happen at all.

As for Stephenson he is 14 – 0 with 8 KOs and vacated his WBO 126-pound Championship earlier this summer. Stevenson won his first fight at his new weight June 9th, when he knocked out Puerto Rico’s Felix Caraballo in the sixth round.

He is currently in line to fight the WBO World Champ, Jamel Herring. That’s provided that Herring gets past Ireland’s Carl Frampton in their scheduled battle later in December.

Stevenson, who uses the same training staff and nutritionist as Herring, previously said about battling him,

“The thing with that is I will fight Jamel if I have no other choice but to fight him… I’m not gonna get on record and call out Jamel Herring because me and him are real tight.”

However, the money and prestige involved for a world title challenge of Herring after his potential Frampton win would be hard to pass up.

As for Khan- Clary, he’s a veteran with a 28 – 2 record and 19 KOs. And, he definitely presents formidable opposition to the talented, former USA Silver Medalist at the Rio Olympics, Stevenson.

The Top Rank card will also reportedly have lightweight contender Felix Verdejo in action in the co-main event and also, feature unbeaten middleweight Edgar Berlanga. Berlanda has scored an impressive 15 consecutive first round knockouts to start his professional career.