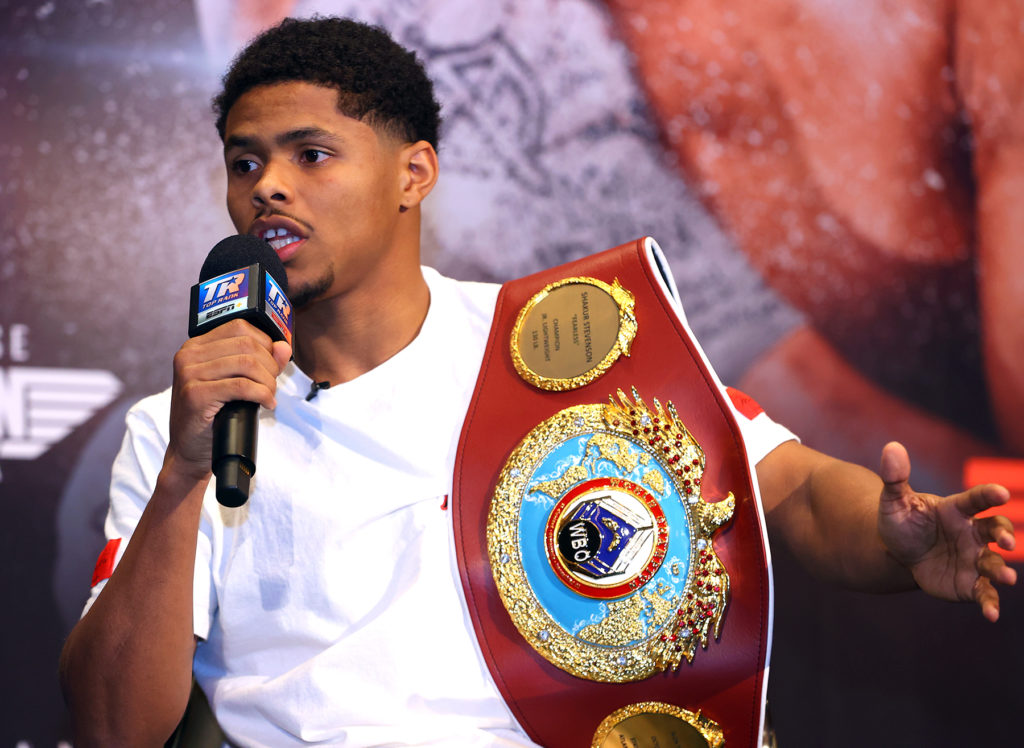 Shakur Stevenson badly missed weight on Thursday and was stripped of the WBC and WBO junior lightweight world titles the day before he was due to defend them against top contender Robson Conceicao.

For several hours after the weigh-in the fight was in jeopardy of not happening as the sides played hardball in negotiations about what it would take for the fight to go forward. Finally, a little before 11 p.m. ET the sides made a deal for the fight to go on with Stevenson agreeing to pay Conceicao an undisclosed amount of money from his seven-figure purse, according to Top Rank. Also, Stevenson is not required to participate in any sort of fight-day weight check, so he is free to re-hydrate to whatever weight he wants, Top Rank said.

The fight will still headline the Top Rank Boxing on ESPN card on Friday (ESPN, ESPN Deportes, ESPN+, 10 p.m. ET) at Prudential Center in Stevenson’s hometown of Newark, New Jersey. If Stevenson were to win the titles would remain vacant. If Conceicao were to win he would claim the belts.

After Conceicao weighed in at 129.6 pounds for his second shot at a world title, Stevenson stepped on the scale and was 131.6 pounds – 1.6 over the 130-pound division limit.

Top Rank personnel placed a black screen in front of the scale in anticipation of Stevenson stripping nude to re-weigh, but Stevenson simply shook his head no and did not use any of the two additional hours he could have used in an effort to make weight under New Jersey State Athletic Control Board rules.

According to duBoef, Stevenson had spent four hours before the weigh-in trying to cut the last pound and change and had nothing left to give, so he didn’t use the additional extra time.

“I gave it my all. I’ve been professional my whole career and made weight, but my body just can’t make 130 anymore,” Stevenson posted on Twitter. “My health has to come first. I’m moving up to 135 in my next fight.”

Stevenson (18-0, 9 KOs), 25, a southpaw, vacated the WBO featherweight world title without defending it to move up to junior lightweight in 2020. After three wins in the division, including claiming the WBO interim belt, he knocked out Jamel Herring in the 10th round to take the full title in October 2021.

In his only defense, Stevenson dropped and dominated Oscar Valdez en route to a lopsided unanimous decision on April 30 at the MGM Grand in Las Vegas to unify the WBO and WBC titles.

Conceicao (17-1, 8 KOs), 33, a three-time Olympian, who won a 2016 Olympic gold medal for Brazil in front of his home crowd in Rio de Janeiro, lost his only pro fight to then-WBC titleholder Valdez via controversial decision — 115-112, 115-112 and 117-110 – last September 2021 and comes into the fight with Stevenson viewing himself as the uncrowned champion due to the controversy of the decision against Valdez.

Shakur Stevenson Ready To Deliver In Front Of Home Fans?
Podcast Rebuttal On Canelo-Golovkin- “I’m Not A Liar And I’m Not Misinformed”
Advertisement
To Top
We use cookies to ensure that we give you the best experience on our website. If you continue to use this site we will assume that you are happy with it.OkNoPrivacy policy