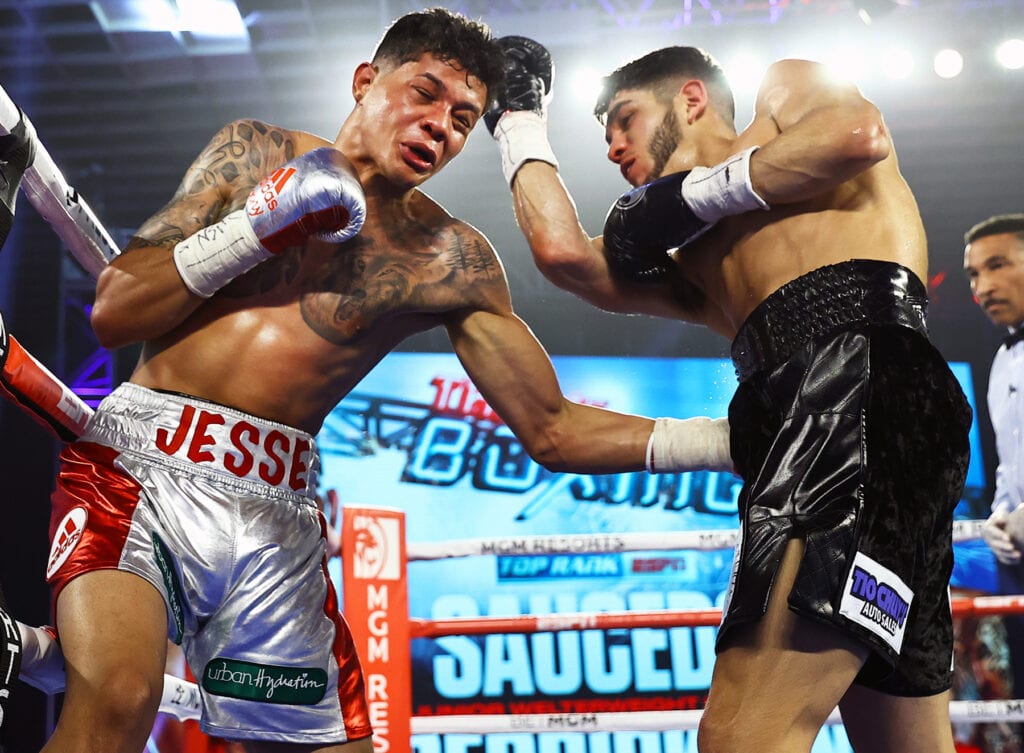 Alex Saucedo (30-1, 19 KOs) continued his push back to another title shot. He was closing out Tuesday’s Top Rank Boxing inside “the Bubble” at the MGM Grand Conference Room in Las Vegas. Saucedo won by unanimous decision over Sonny Frederickson (21-2, 14 KOs) to push his win streak to two, since his lone loss for the title against Maurice Hooker back in November 2018.

Saucedo and Fredrickson before the bell rang was hyped up to be a shootout, and once the bell rang on this Junior Welterweight contest, it was just that. Both were known for firing more than most in the division, which is something the broadcast pointed out and was just that from the onset.

The first two rounds, it was all Saucedo from the jump,as he was able to just fire at will and land shots on Frederickson. The one thing that was keeping Frederickson in the fight was the rare chance to land an uppercut, but early on, Saucedo kept the pressure and the hands coming.

Whenever he had Frederickson on the ropes, Saucedo was able to use his left to follow up with a right and it became what felt like Fredrickson was a sitting duck.

This changed near the end of the fourth round and especially in the fifth, as Fredrickson started to throw more in what became a real firefight.  Saucedo was getting caught with some clean punches coming into Frederickson, who took advantage. In the sixth round, you can see the nose of Saucedo taking the brunt of Frederickson’s jab.

Saucedo gets the Unanimous Decision victory vs. Sonny Fredrickson in a 10-round throwdown‼️#SaucedoFredrickson pic.twitter.com/oOjb3NXWdl

Martinez, Brækhus in action in August
Miller explains latest positive drug test
Advertisement
To Top
We use cookies to ensure that we give you the best experience on our website. If you continue to use this site we will assume that you are happy with it.Ok