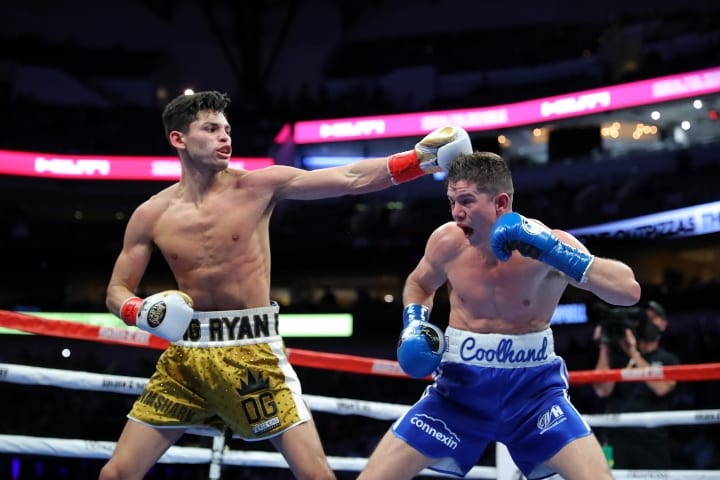 Newly anointed WBC #1 Lightweight contender Ryan Garcia made clear Saturday night that he wants fellow unbeaten Gervonta Davis for his next bout. Now the two of them have taken to social media to insult each other and heighten interest in their proposed bout.

First, the 22 year old Garcia scored the most significant win of his young career with a 7th round KO over England’s Luke Campbell Saturday night in Dallas. That win solidified him as the next challenger for WBC champ, Devin Haney, later in 2021.

Yet, Garcia made it clear post fight that he wants the two division world champ Davis to be his next fight,

This fight I put down an Olympic Gold Medalist (Campbell). Lomachenko couldn’t stop him. Linares couldn’t finish him. I showed today, I’m special.”

He later led the over 5,000 fans in attendance, with Haney one of them at ringside, in a chant of  “We want Tank!, We want Tank!”

Well on Tuesday morning, things heated up promotionally for that potential bout. That’s when Davis, responded on Twitter to a tweet about whether he would somehow be scared of fighting Garcia after his KO win?

Davis has since deleted the tweet, but we have screen-shotted it here with Garcia having quickly responded that he would KO Davis quickly,

As much as the fighters want the fight it will be problematic, as Garcia fights for Oscar De La Hoya’s “Golden Boy Promotions” which is an arch enemy of Davis’ “Premier Boxing Champions.” And, it’s unlikely that those sides would agree any time soon to stage a co-promoted battle.

Further, the WBC says they want Haney vs. Garcia to be the next bout for both.

Then again, Davis’ now deleted tweet says the fight has “already been made.” So, perhaps that has been discussed and settled between the two.

While Garcia’s next about may be in doubt, there can be no mistake he answered the tough Saturday test, emphatically, with a body shot that still has the boxing world buzzing for the last few days.