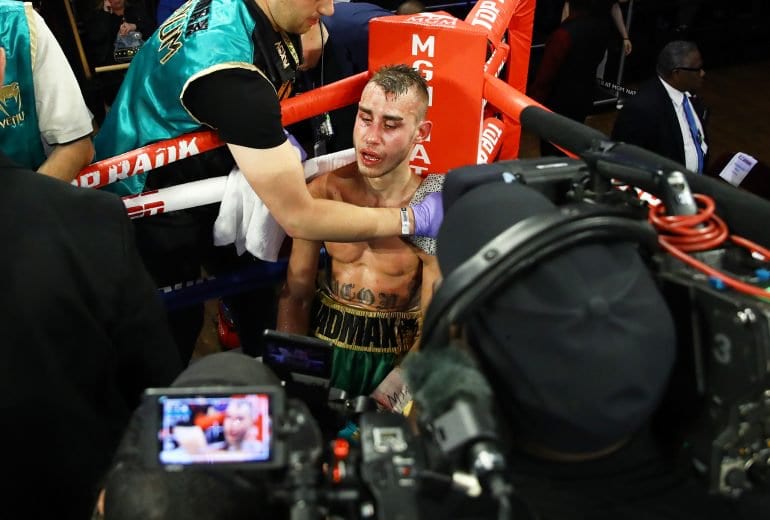 For three days, the boxing world has been searching for more info and any update on seriously injured Russian Jr. Welterweight Contender Maxim Dadashev, who remains in critical condition in a Maryland Hospital.

Unfortunately, the news has been scarce, while Dadashev’s wife is arriving from Russia to the United States Monday night.

ESPN’s Steve Kim, who has been covering the situation that since Dadashev collapsed and was taken by ambulance after the Top Rank co-main event fight on Friday night in Oxon Hill, Maryland, had more of an update Monday evening:

Donatas Janusuvicius (S@C coach for Maxim Dadashev) tells me that he is picking up Dadashev's wife tonight from the airport in DC. He says at this point, no change in Dadashev's condition… #boxing

As we wrote this weekend, Dadashev was suffered massive head injury during his battle with fellow unbeaten contender Subriel Matias on Friday night. Matias was winning the fight decisively on all three judges cards, and Dadashev continued to absorb punishment in the late rounds. That’s when, longtime trainer, and former fighter, James “Buddy” McGirt finally stopped it after the 11th round.

ESPN cameras showed Dadashev clearly in distress in his corner after the stoppage, and there was some delay in getting him out of the ring and significant medical treatment. Media and observers at ringside saw him leave the ring with the help of his team, but, Dadashev was unable to make it back to the locker room before collapsing.

Paramedics and a stretcher were summoned, and he was immediately taken by ambulance to Prince George’s Hospital in nearby Cheverly, Maryland.

Kim reported early Saturday that Dadashev had had brain surgery to relieve swelling and the surgeon briefed his manager and strength coach,

At 2:25 a.m., neurosurgeon Mary IH Cobb told Dadashev’s manager Egis Klimas and trainer Donatas Janusevicius that the boxer had suffered a brain bleed on his right side, that his head was shaved and his scalp opened up, and that he was showing signs of severe brain damage. He had been given medication to decrease swelling.

“He will swell over the next few days,” Cobb said. “I don’t know how much brain damage he has.”

Cobb added that some who sustain subdural hematomas can make a relatively strong recovery.

Dadashev has reportedly been in a medically induced coma, since the surgery, in an attempt to help with that brain swelling.

Kim went on to report Monday night that Janusevicius is meeting Dadashev’s wife and bringing her to the hospital and that she will decide on further updates and information.

Dadashev is from St. Petersburg, Russia, but had been training with McGirt and Janusevicius out of Oxnard, CA.