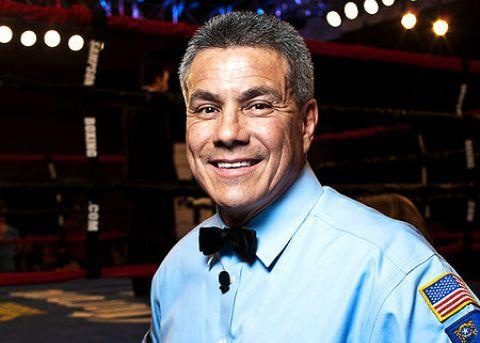 Off a solid performance officiating the WBC Heavyweight title fight last month between Tyson Fury and Deontay Wilder, veteran Las Vegas referee Russell Mora will be back in a prominent Pay-Per-View fight Saturday night. That’s, when Canelo Alvarez and Caleb Plant do battle for the Undisputed super middleweight championship at the MGM Grand Garden Arena on pay-per-view.

The 61 year old, New Mexico native Mora’s championship experience is extensive, as he stopped the Fury-Wilder fight after the Alabama challenger was decked face first in the 11th round on October 9th. Mora previously was the third man in the ring for the Yordenis Ugas decision upset win over Manny Pacquiao for the WBA World Welterweight Title in Vegas in August. He also worked Teofimo Lopez’s unanimous decision win over Vasiliy Lomachenko for the Undisputed Lightweight Title in October of last year.

Mora has only worked one previous Canelo fight and that was his 11th round stoppage of Sergey Kovalev in November of 2019 for the WBO Light Heavyweight Championship. Mora moved in to wave the fight off after Canelo landed a booming right hand dropping the Russian.

As Idec wrote, this is the third time that Moretti and Weisfeld will have worked a Canelo championship fight in Vegas together. The first coming in his battle with Gennady Golovkin in September of 2018, and that night they both gave the fight to Canelo 115 – 113, as he won a majority decision for the Unfiied Middleweight Title.

Moretti has worked nine previous Alvarez bouts, including having scored Floyd Mayweather to defeat him 116 – 112 in their 2013 title fight in Las Vegas. This will be the fourth time that Weisfeld has worked a Canelo title fight. And, as for Morse Jarman, she has only worked one previous Canelo fight and that was his ninth-round TKO of Jose Cotto in May of 2010, which she had him leading comfortably at the time of the stoppage.