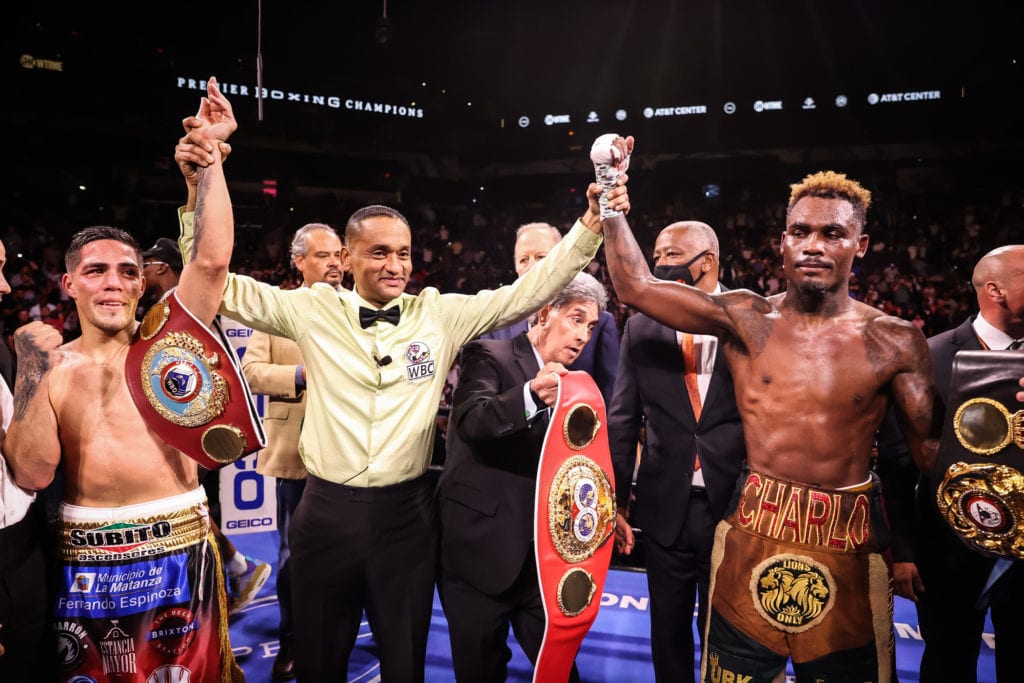 The puzzlement of why Unified 154 lb. World champ Jermell Charlo and WBO World titleholder Brian Castano haven’t already scheduled their rematch seems to have cleared up. This, as a report Sunday night says the WBO has given the blessing for Charlo and Castano to fight again for the Undisputed Super Middleweight Championship early in 2022.

Boxing insider Lance Pugmire, now with USAToday.com, tweeted Sunday night that the World Boxing Organization had been an obstacle to allow the rematch to take place. This, as top contender Tim Tszyu of Australia is “waiting in the wings” to fight for Castano’s version of the belt,

An official familiar with the situation tells @USATSportsPlus that a resolution has been struck with Tim Tszyu allowing the WBO championship committee to sanction the Brian Castano-Jermell Charlo @TwinCharlo rematch that @premierboxing is expected to stage in Feb. in Houston.

We’ve been wondering for weeks on why Charlo-Castano II hasn’t been announced? This after the two engaged in a highly entertaining 12 round battle this past Summer that ended in a controversial draw.

Back in July, the Argentinian born Castano took the fight to the WBA/WBC/IBF champ early. Castano looked to have banked three or four early rounds by being busier and landing more frequently on Charlo on the inside.

And, all three judges, including veteran championship scorers Tim Cheatham and Steve Weisfeld gave Charlo each of the final three rounds 10 – 12. That ended up saving Charlo on the “split” draw of one judge each scoring for Charlo or Castano and the third having it even at 114-114.

Brian Castano is one hell of a better fighter than anyone gave him credit for and he came to fight for his life Saturday. If fights are scored as a whole I landed the harder and better shots, but boxing isn’t scored that way. Boxing is scored round by round.

As for the Australian star Tszyu, he just improved to 20-0 as a pro with his latest win last Wednesday night in Sydney with a 12 round decision over Takeshi Inoue. While he has fame there, it’s apparent that Tszyu, who is the #1 ranked WBO Jr. Middleweight, will need to come to the U.S. if he wants to face the Charlo-Castano winner for the Undisputed crown.

Pugmire further reported that Premier Boxing Champions will now target February and potentially, Charlo’s hometown of Houston, TX, as the location for the anticipated Castano rematch.