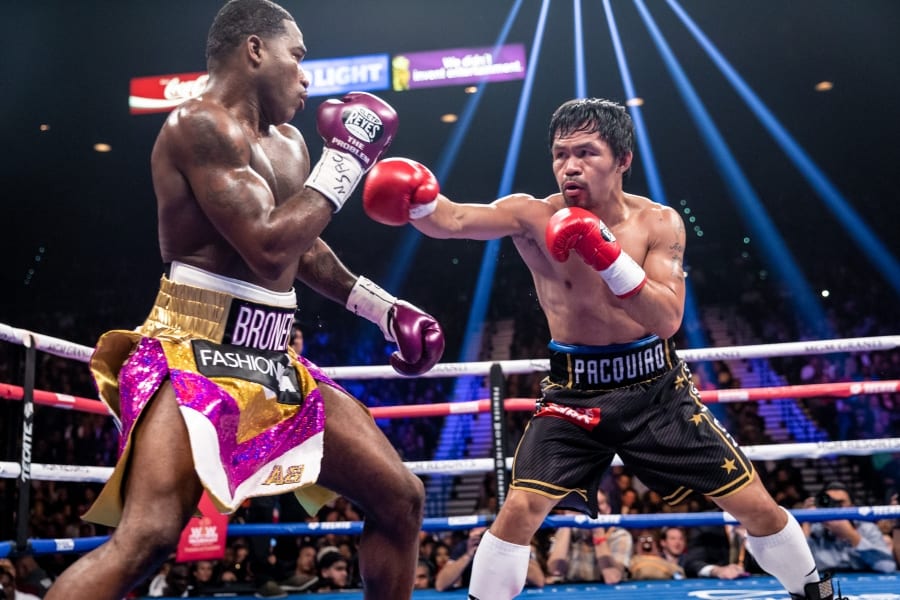 Report- Troubled Adrien Broner Will Be Back In February

Former two-division World Champion Adrien Broner has continued to have a myriad of problems outside of the ring. However, it looks like for the first time in over two years he will be back between the ropes come February.

Boxing Insider Mike Coppinger of the Athletic reported Tuesday evening that Broner is apparently part of a Premier Boxing Champions card coming at some point in February. And there will be a Heavyweight battle as part of the co-feature,

Sources: Adrien Broner slated to return in February on Showtime. Few opponents being discussed. First bout since he was defeated by Manny Pacquiao in January 2019. Otto Wallin-Dominic Breazeale heavyweight scarp is the chief support

First, Broner’s fight would be his first since he was beaten in a lopsided decision for the WBA World Welterweight title by Future Hall-of-Famer Manny Pacquiao (above) in January of 2019. Pacquiao’s domination of Broner combined with Broner’s immature and seemingly ungrateful, clown-like behavior around and after the pay-per-view a basically sealed his fate on getting any more big-time fights in the recent past.

The bigger problems for Broner have been his legal troubles. As we wrote earlier in August, Broner has been in and out of a Cleveland jail due to missed court appearances surrounding a sexual assault allegation and a civil judgement against him in the case.

Cuyahoga County Judge Sherry Miday told the 31-year-old Broner that she hoped sentencing him to seven days in jail for contempt of court would be “a wake-up call” to him. This after he was also arrested back in March on DUI charges, while on probation, in Miami in his latest controversy.

Broner, 33-4-1, has had a myriad of legal troubles, including pleading guilty in April 2019 to two misdemeanor charges in connection with a June 2018 assault of a woman in a Cleveland nightclub. As part of the plea agreement, Broner got a suspended six months jail sentence, was placed on probation for two years,  faced a fine from the court and had to reimburse the victim for over $4,000 in her medical bills.

The victim also sued Broner, who never retained counsel and never contested her civil charges, and a Cleveland Civil Judge, Margaret Russo, awarded her an $830,000 judgment last December. The woman’s lawyers updated the judge in a motion in early August that Broner had not responded to document requests about his finances, failed to show up for scheduled depositions in that case and was avoiding paying the damages.

Broner told the judge in August that he is basically broke and does not have the money to pay the accuser in his case. This is especially with him not being able to fight to earn more money.

It’s unclear what caliber of fighter he would be put in with after what would be a 25 month layoff?

As Coppinger also mentioned in his report, the Heavyweight battle between Otto Wallin and Dominic Breazele will also attract some attention. However both Fighters are mainly known for bouts that they have lost.

Wallin was beaten on a 12-round non-title decision by Tyson Fury in June of 2019. And, Breazeale was knocked out in devastating, one-punch fashion just two minutes into his challenge for the WBC Heavyweight Championship with Deontay Wilder.

Wallin, 21-1, 14 KOs was last in action on a “PBC on Showtime” August card, as he stopped journeyman contender Travis Kaufman in five rounds at the Mohegan Sun Casino in Connecticut.

Breazeale, 20-2, also unsuccessfully challenged Anthony Joshua for the Unified Heavyweight title losing by TKO in England in June of 2016.