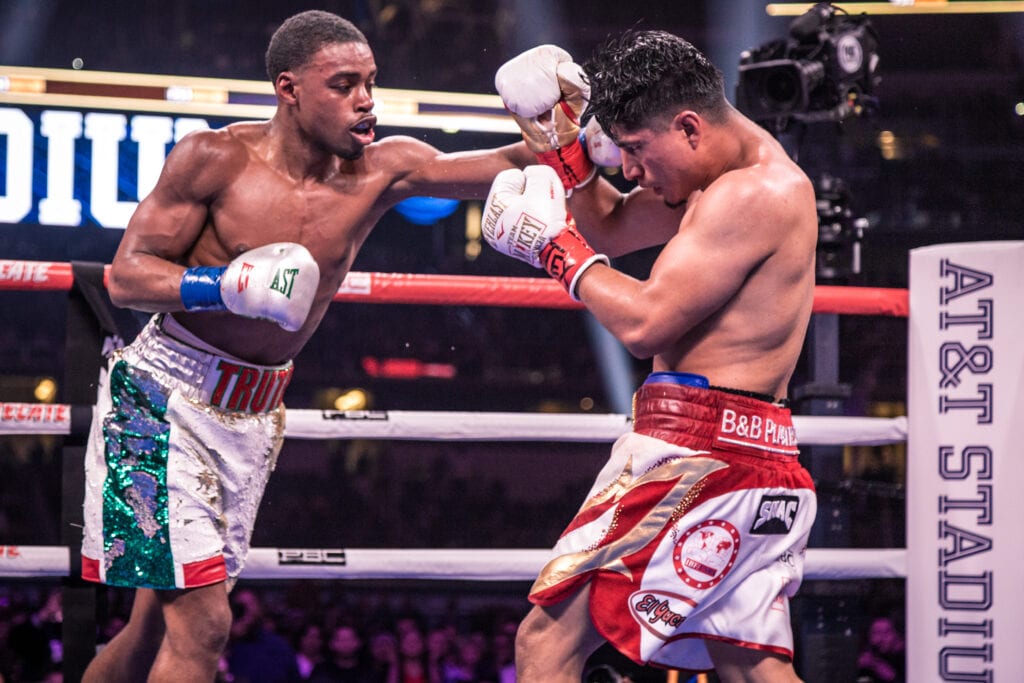 Report- Spence will fight Porter not Crawford in August

There has been a lot of speculation, since Terence Crawford dispatched Amir Khan to retain his version of the welterweight Championship last month at Madison Square Garden, that Crawford may be getting a mega-fight with unbeaten other welterweight belt holder Errol Spence this year. However, that now appears unlikely, as apparently Spence has another opponent in mind to fight first.

SOURCES: The welterweight unification championship fight between Errol Spence Jr. and Shawn Porter is likely to take place Aug. 3 at Barclays Center in Brooklyn, New York. The 147-pound title tilt is expected to headline a PBC on FOX card.

This cannot come as a big surprise, as both fighters are promoted by Premier Boxing Champions and it has been rumored for weeks that Porter would be Spence’s next opponent. This after Spence easily outpointed former unbeaten lightweight titleholder Mikey Garcia in March on pay-per-view in Arlington, Texas.

As for Porter, he successfully defended the WBC belt earlier this year with a twelve round unanimous decision over Yordenis Ugas in Carson, California.

The biggest complication for Crawford is that unlike Spence, Porter and WBA Champion Keith Thurman, he is with Top Rank Boxing and Bob Arum.

As our Marquis Johns wrote late last month, Arum has continued to go on the “P.R. offensive” insulting PBC owner Al Haymon through the media about not wanting allow Crawford-Spence match up to happen. Still, Arum had no problem snatching Tyson Fury for Top Rank, when Fury was on the verge of agreeing to fight WBC champ Deontay Wilder and PBC, in a rematch of their December heavyweight Showdown this summer.

So, in a way, this current scenario in the welterweights maybe a form of payback also from Haymon and PBC.

Spence improved to 25-0 with 21 KOs with the win over Garcia and has defended the IBF belt three times, since winning it with an 11th round knockout of England’s Kell Brook in May of 2017.

Porter is 30-2-1 (17 KOs) and the March win over Ugas was his first successful title defense after he won the belt by beating Danny Garcia in September of 2018.

Crawford, meanwhile is the 35-0 WBO title holder at Welterweight, but will most likely be on the outside looking in, later this summer for chance another title holder.