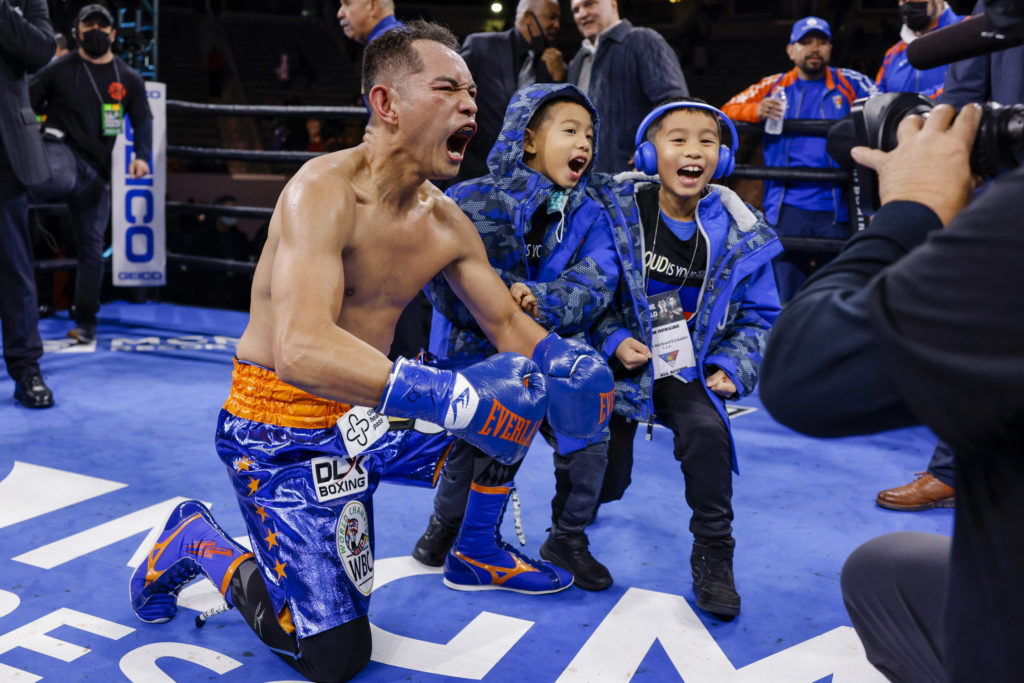 It’s looks like we could be getting a highly anticipated Bantamweight Unification rematch in the first part of 2022. This after a social media report says that WBA/IBF 118 lb. World Champ Naoya “The Monster” Inoue could battle WBC titleholder Nonito “Filipino Flash” Donaire in April.

Southern California based Boxing writer Manouk Akopyan relayed on social media that he’s confirmed representatives of Inoue and Donaire have been negotiations towards a rematch in Japan,

The 2019 fight of the year is moving closer to a rematch and bantamweight championship unification bout. pic.twitter.com/yHEg7FPr6h

Inoue and Donaire staged a tremendous 12 round fight in the finals of the World Boxing Super Series in November of 2019 won by the Monster to capture both the IBF and WBA titles in December of 2019.

Now, the two of them are poised to battle, again in what would be a very attractive and lucrative for both contest.

When last we saw Inoue in December, he was making the third defense of his IBF/WBA World Titles at 118 lb. in his home country. And, Inoue was in control from the outset of the defense against Aran Dipaen of Thailand scoring with lead right hands and hard shots to the body. He bloodied Dipaen’s nose early in the fight and it continued to be an issue as things progressed.

“The Monster,” now 22-0, 19 KOs stunned the challenger momentarily with a hard right midway through the third round, but remained patient getting in some ring work for the first time, since his June KO title defense win over Michael Dasmarinas in Las Vegas.

The end came in the final minute of the eighth round with Inoue again scoring a right to the body followed by a right to the head that was partially blocked. But, with Dipaen backing up, the champ floored him with a hard, straight left for the first knockdown of the fight. Dipaen rose, bleeding badly from the nose and Inoue finished things with another hard left that staggered him along the ropes.

As for Donaire, he’s already become the oldest World Bantamweight champ ever by regaining a portion of the championship with his KO of Nordine Oubaali in California in May. The 39 year old then defended his WBC belt, again, in December by overwhelming Reymart Gaballo in four rounds running his record to 42-6 with 28 KOs.

There remains a concern on the location of where a potential Inoue-Donaire bout could take place. This due to the ongoing Covid 19 concerns and guidelines which have restricted international travel to the Far East. Those concerns postponed the Middleweight Unification bout between Gennady Golovkin and Ryota Murata in Japan for late December.

So,while the intent maybe to have the bout in Japan, Inoue might come back to the U.S., where Top Rank Boxing has staged multiple bouts for him in Las Vegas.

Donaire, who’s had an agreement with Premier Boxing Champions, has fought in California for his last two title bouts.