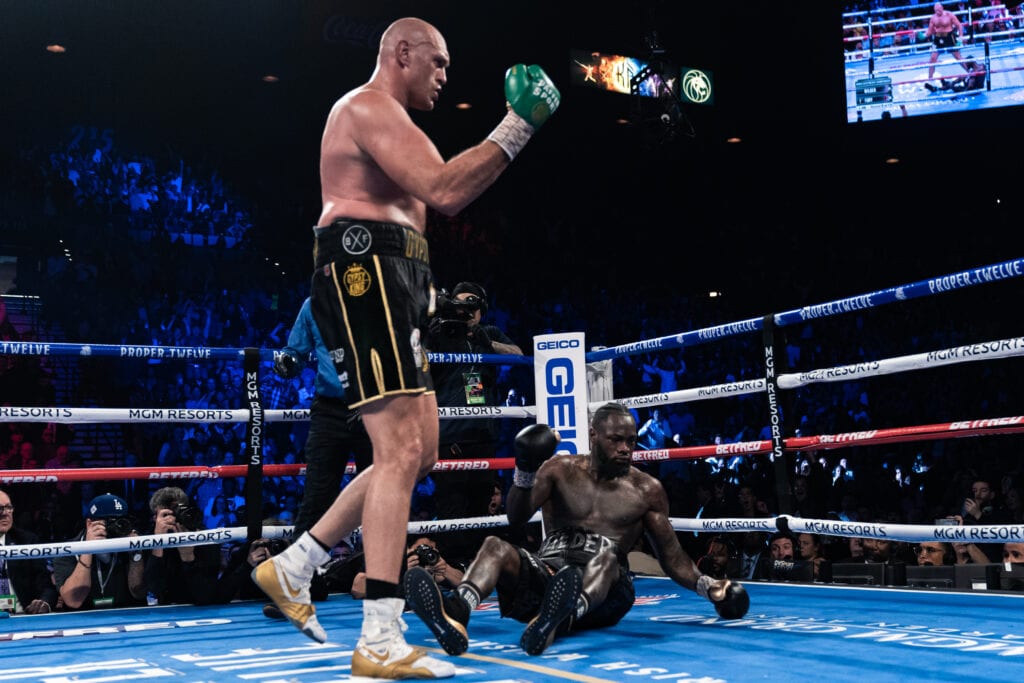 Finally some positive news out of the postponements and delays for boxing in the rain to resume after the Coronavirus outbreak worldwide. This, as a report Wednesday night that the third world heavyweight title fight between WBC Champion Tyson Fury and now, challenger Deontay Wilder will take place in October in Las Vegas.

Boxing Insider, Mike Coppinger of the Athletic, reported on social media Wednesday night that Fury Wilder which was to have been July 18th in the Vegas desert will now be the first Saturday in October on Pay-per-view:

Breaking: Sources tell The Athletic that Tyson Fury and Deontay Wilder are slated to meet again Oct. 3 in Las Vegas in an ESPN/FOX PPV. Details inside on the heavyweight championship trilogy bout (and no, this fight isn’t “moving” because of the pandemic)https://t.co/wZqkQYUGgE

This report comes on the heels of Top Rank Boxing promoter Bob Arum saying on Monday that the July 18th fight date for the Fury-Wilder third fight was untenable. He explained the reasoning of the fighters not being assured of that date. And further, from a promotional and revenue standpoint for Top Rank boxing and Premier Boxing Champions, there would be no way to guarantee the venue, the ability to sell tickets and for fans to plan and to be able to travel, as soon as July.

Currently Las Vegas casinos resorts and hotels are closed because of the COVID-19 scare globally. However, it is expected by later this summer that things will gradually, or fully, reopen and then, the championship boxing schedule will also resume.

Fury handed Wilder his first pro loss on February 22nd in Las Vegas in Wilder’s 11th title defense, scoring a seventh round TKO and taking the WBC belt. The two fought to a controversial draw in their first fight in Los Angeles in December of 2018.

The third battle had been set into motion, when Wilder exercised the rematch clause both fighters had in the contract that the two signed late last summer. It is believed in that deal, that the latest the two fighters could have the third fight without having to sign a new agreement was the month of October this year.