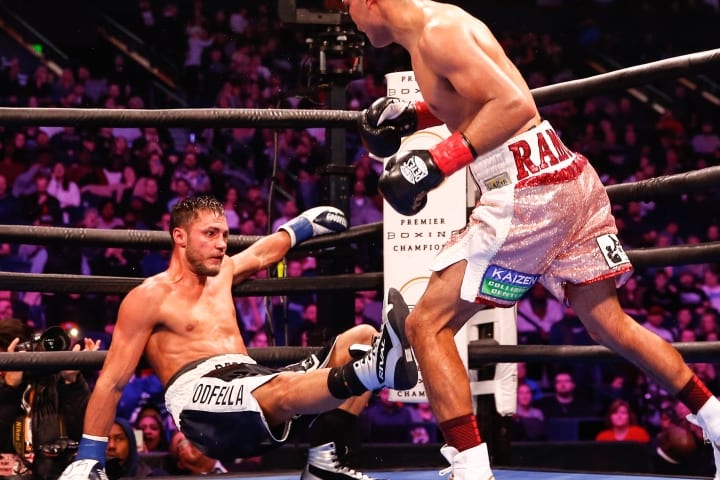 One of the best moments of Saturday night was the co-main event leading into Caleb Plant was when Abel Ramos scored a stunning last second TKO victory over Bryant Perrella in a scheduled 10-round welterweight match. Heading into the 10th and final round Ramos was told by his cornermen that he needed a knockout to win. Ramos (26-3-2, 20 KOs) delivered, badly hurting and dropping Perrella twice in the waning seconds of the frame, prompting referee Jack Reiss to wave the welterweight co-main event off with just one second remaining.

“I know the fight’s not over until it’s over,” said Ramos. “That’s the game. I’ve been sick for two weeks. But no excuses. I wanted to come here and perform.

“I watched the Chavez-Taylor fight like 10 million times and I never thought I’d be in something like that. It just goes to prove that fights are never over till it’s over. You have to fight every single second of every single round.”

“This is boxing. It’s like Meldrick Taylor and Chavez,” said Perrella, agreeing with Ramos’ comments. “These things just happen. I’m not going to take anything away from my opponent. I was winning every round convincingly. What can I say? There was second left in the 10th round. It’s like a needle in the haystack. It is what it is.”

Southpaw Perrella controlled much of the action, using side to side movement, angles and rapid-fire combinations to stifle Ramos’ offense. A left hook in the third briefly buckled Ramos. Another in the fifth stunned him.

“Perrella’s a tough fighter,” said Ramos. “He’s a strong, strong fighter. I have nothing but respect for him. I expected a tough fight and that’s what happened.”

Ramos never stopped coming forward, picking up the pace as Perrella slowed down. With 34 seconds remaining in the 10th, Ramos landed a perfect left uppercut flush on the chin. Perrella sank to the mat, getting up on unsteady legs. Ramos pounced once action resumed, unloading until a straight right drove Perrella to the floor again. Again, he made it to his feet but couldn’t walk straight without stumbling. Reiss immediately waved it off at 2:59.

“Everything was going well, and I was winning the fight, round by round,” said Perrella. “I don’t know. This is boxing. That’s the thing about the sport. It is what it is. There’s nothing I can do about it. I’m not going to make up any excuses or take anything away from my opponent. It’s just an experience that you go through in life and you have to overcome it. Absolutely I’d like to do it again with him. We can get a rematch in for sure.”

“I want all the welterweights,” Ramos exclaimed. “I’d like to have another big TV fight and go out there and prove myself.”

England set to battle Tinampay in March
McKinson, Edwards back in action in April
Advertisement
To Top