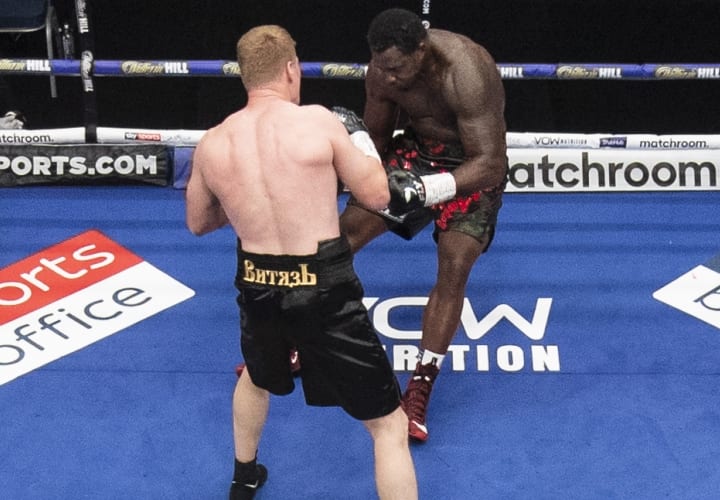 Povetkin-Whyte Rematch For January Off Again

Dillian Whyte will apparently have to wait a little while longer to try to get his revenge against the man who brutally kayoed him with a single punch in August. This after it was revealed Monday that Russian Alexander Povetkin had to go back into a hospital due to Covid 19 complications and won’t be fighting next month.

Boxingscene.com had the story Monday that Povetkin, who is the former WBA Heavyweight champ and scored a career boosting 5th round KO of the British contender in August, is on the mend, but not fully ready to fight,

Povetkin Still Recovering From COVID, Will Not Face Whyte in January https://t.co/l0EbvnWnPJ pic.twitter.com/LNZZu0tB2z

“Alexander had to go to hospital again for examinations. The other day he was discharged and is now starting training,” Andrey Ryabinsky told TASS, the Russian state newspaper.

“We’ll increase the workload in stages, under the supervision of doctors. Boxing is a serious load on the body, I won’t allow Alexander’s health to be risked. There will be no fight with Whyte in January. We underestimated the consequences of the virus, everything did not go as smoothly as we thought…

“We will discuss and appoint the date of the fight when we understand at what pace we can move with preparation.”

The rematch had been tentatively set for late January, but never announced by Eddie Hearn and Matchroom Boxing.

This after Whyte suffered the devastating loss, while hoping to secure a WBC title shot with champ Tyson Fury back in August.

For his part Whyte, questioned in November why the rematch was being postponed and alleged, foolishly, that Povetkin didn’t have Coronavirus telling Sky Sports then,

“I personally don’t think he’s got Covid.”I think he just needed more time to get ready, because he took a lot of damage in the first fight.

Ryabinsky replied then that they were ready to show the doctors documentation, etc. of the Covid 19 to Whyte, Hearn or anyone else that Povetkin was not only positive, but hospitalized.

What is not in dispute is that Povetkin, after being knocked down twice in the fight, suddenly cold-cocked Wyhte (photo top) with a thunderous left uppercut in the fifth round of their battle. Whyte laid motionless for several seconds and the referee did not bother to count, as Povetkin scored one of the biggest recent victories of his career.

And, that upset derailed any chance that Whyte, who hasn’t won a significant fight in over two years, had to try to maneuver his way into a mandatory title shot with the WBC and Fury.

Povetkin obviously stands to get back into that Heavyweight title picture, if he can validate his August win by beating Whyte and ending Whyte’s hopes, once and for all, of being taken seriously as a Heavyweight threat.

But, for now that will be later in the first part of 2021, at the earliest.