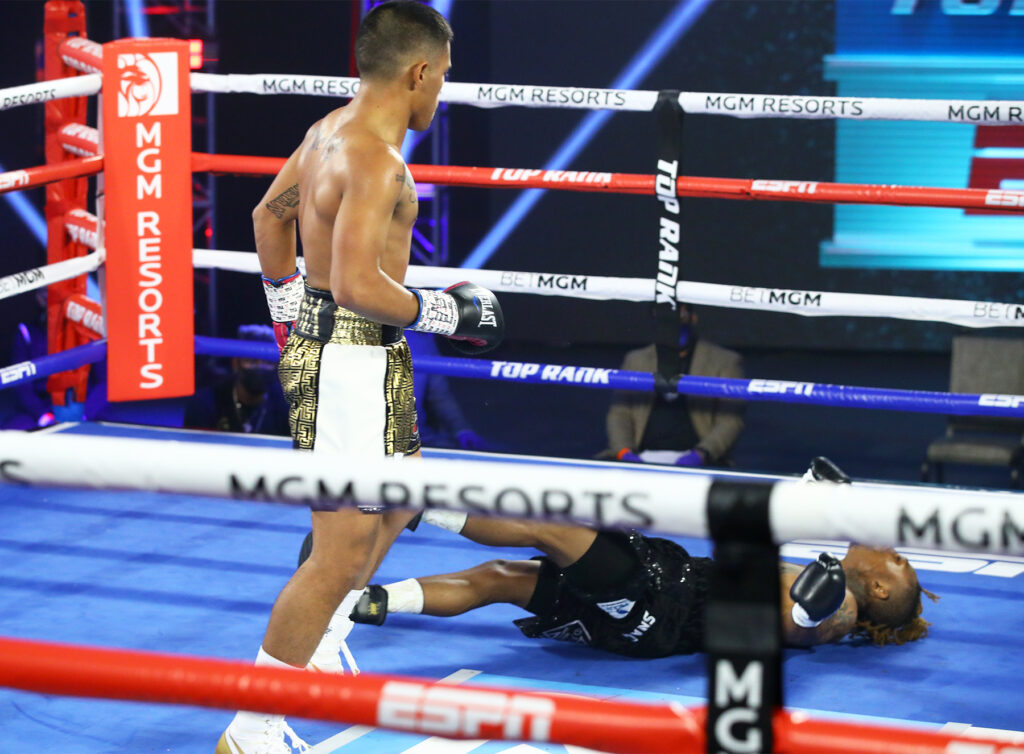 Bantamweight contender Joshua Greer Jr. was upset Tuesday night by Mike Plania in the Top Rank main event on ESPN by majority decision with scorecards of 94-94, 96-92 and 97-91. It was odd having a 94-94 card in a bout that Plania was clearly in control of, but questionable scorecards were the underlying theme of the entire card from top to bottom.

Greer (22-2-1, 13 KOs) is nicknamed “Night Night” and known for bringing the signature pillow to the ring. He took on Plania (24-1, 12 KOs) to close out the start of the second week of live boxing taken place at “The Bubble” inside the MGM Grand Casino in Las Vegas, Nevada.

It started from the onset like an upset brewing, as Plania scored a knockdown from a looping left hook to Greer’s jaw in the middle of the first round. The last time Greer was knocked down in the 1st round, he won by unanimous decision in 6 rounds against Jose Luis Gallegos back in 2016.

The first four rounds of this fight had showed that Plania was able to land his left and looking solid.

Mike Plania gets off to a fast start, catching & dropping Joshua Greer Jr. in the first round with a lead left hook.#GreerPlania | LIVE NOW on ESPN pic.twitter.com/aYTv9L14Dl

The second half of the fight was more of the same of this from contender from the Philipines, Plania.

The sixth round near the closing moments saw Greer get knocked down for a second time in the fight from another crashing left hook to close out the round. The ESPN broadcast team of Joe Tessitore, Andre Ward and Timothy Bradley continued to praise Plania for his poise and punching power. He’s now 24-1 and has won nine straight fights, since his lone pro loss in March of 2018,

The eighth round saw an adjustment from Greer, where he primarily went right at “Magic Mike” and started fighting on the inside. It was his best work of the night. The other change was that Plania’s left hook, which was effective all night, wasn’t as much in close.

While Plania was clearly showing signs of fatigue in the last two rounds of the contest, he was able to hang on and, more importantly, not get knocked down to hang on for the victory.

Greer, now 22-2-1, came into this bout a 6 to 1 favorite at the catchweight of 120 lb. to beat the Flipino Plania and was raned #1 WBO Bantamweight. He walked out of this one on the wrong end for the first time since a four-rounder against Stephen Fulton back in 2015.