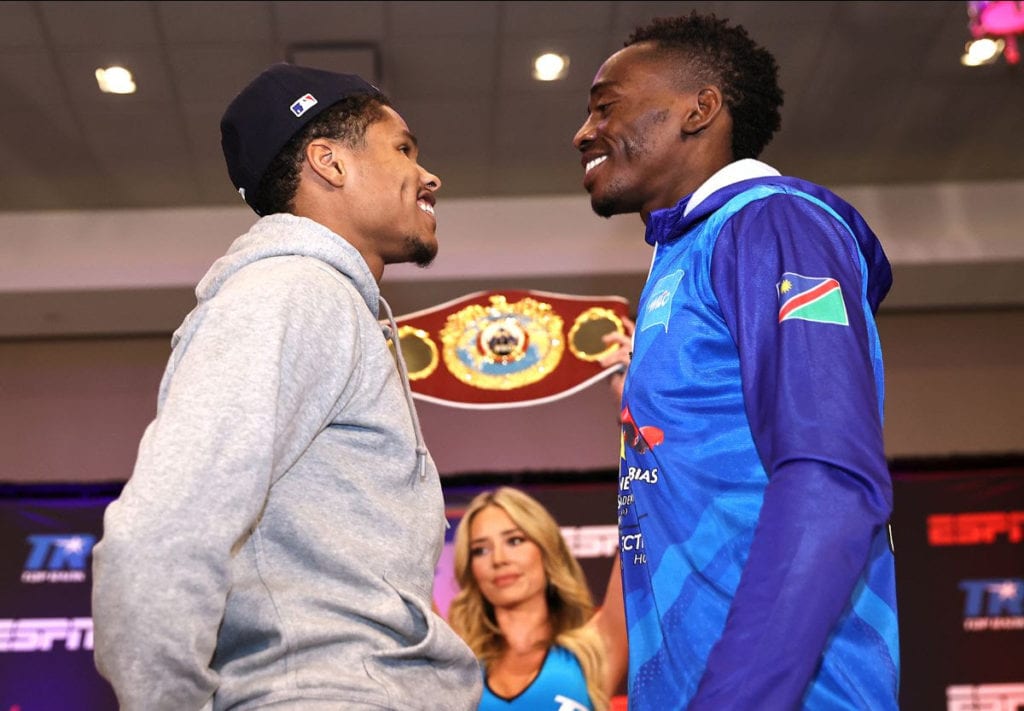 Shakur Stevenson is back in action this Saturday against Namibian puncher Jeremiah Nakathila from the Virgin Hotel Las Vegas on ESPN and ESPN+ at 10 p.m. in what is slated for the WBO interim 130-pound title.

Hopefully, this fight for Stevenson will elevate him to the next level in competition.

Check out our latest episode of The Big Fight Weekend Podcast where we speak about this bout as well as with “The Kings” Showtime Documentary director Mat Whitecross.

Stevenson speaking at the final press conference said all that many of us know about Nakathila, a police officer in his native country in South Africa.

“I’ll never lose to 5-0,” Stevenson said about his opponent at the final press conference Thursday afternoon.

Stevenson’s challenger Nakathila (21-1, 17 KOs) has been waiting for a shot at the 130 title for a long time. Pandemic aside, at least over 2 years for this fight to come to fruition. He also comes into this fight with Stevenson winning his last 10 fights by stoppage but will be making his US debut Saturday night and is as expected a huge underdog to Stevenson.

“Nakathila will give it a go, and I think it will be a very, very exciting fight.” Top Rank CEO Bob Arum stated at the conference.

While Arum thinks this will interesting, I hope this is the last of these stay-busy fights for Stevenson. Thankfully, if he is victorious, the WBO will help that out. Current titleholder Jamel Herring would be next in line for the winner of this one and what would hopefully lead to a unification bout with current WBC champion Oscar Valdez in 2022. Both Herring and Stevenson have been angling for fights with Valdez but slated in his own stay-busy defense against Robson Conceicao in September.

“I just feel like, when I’m at my best, it doesn’t matter who the opponent is. It’s been like that my whole career since I’ve been an amateur. You don’t know who you’re going to fight in the amateurs. You come up and you just gotta fight people,” Stevenson said.

“It feels good knowing that Bob thinks I’m the next superstar of the sport, and I have to live up to the hype.”

This fight is talior-made for this to happen for Stevenson to deliver and I think he will in what should hopefully lead to a higher profile matchup after Saturday night.