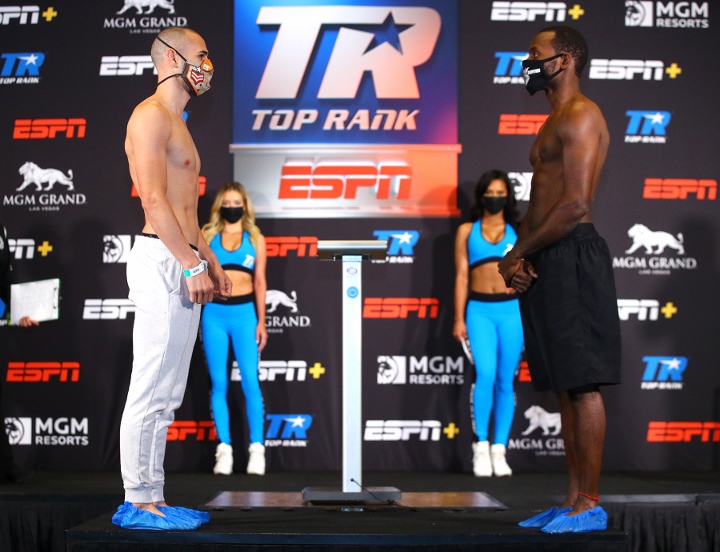 Pedraza-LesPierre fight back on officially for July 2nd

Top Rank made the announcement Wednesday afternoon that the 10 round battle, which was called off last Thursday afternoon when LesPierre’s trainer, Jose Tavares, tested positive for Covid 19, is now quickly back on the schedule:

🥊 JUST ANNOUNCED: Week 4 of the summer series will conclude with a rescheduled Junior Welterweight clash, with @sniper_pedraza continuing his hunt for 3-weight world champ status.

“Mikkel and Jose deserve this opportunity, and I commend both camps for agreeing to reschedule this fight on short notice.”

As we wrote Monday, controversy surrounded the postponement earlier this week, when Tavares revealed that he had been retested and was negative for the Coronavirus. Tavares has yet to comment publicly, but it’s believed that he will be allowed back into the Top Rank “bubble” at the MGM Grand Resort to be re-tested and then, be in LesPierre’s corner in eight days.

His case is similar to that of female fighter, Mikaela Mayer. Mayer had her co-main event bout with the Top Rank also canceled two weeks ago, when the Nevada commission said she was positive for Covid-19.

Mayer disputed that positive test and a subsequent second test revealed that she did not have the virus and therefore, was not contagious. Further, she is now medically cleared to come back and fight later in the summer, if it can be arranged.

Top Rank is utilizing stringent guidelines from the Nevada Commission for testing for everyone associated with their fight cards, including sequestering all fighters, trainers and other personnel through their fights at the MGM Grand Convention area. However, these two cases of apparent erroneous positive tests, have called their type of testing into question.

The fighters said in the Top Rank statement,

“I didn’t want to wait around for this fight, so I’m glad we got the deal done,” Pedraza said. “My march toward a junior welterweight world title continues July 2 in Las Vegas.”

“I want to thank Top Rank and DiBella Entertainment for making this fight happen through the trials and tribulations,” LesPierre said. “I’m honored to be the main event on July 2, and I am ready to showcase my talent to the world and prove my world championship caliber.”

Ironically, this fight will replace Jamel Herring’s WBO Jr. Lightweight bout that was to have been the main event next Thursday, but Herring confirmed that he tested positive for Covid 19 last week. He is hoping that his fight with Jonathan Oquendo can also be rescheduled for later in July in Vegas.

Butaev Reacts To Besputin’s Positive ‘B’ Sample
Hearn teases Friday Matchroom “Fight Camp” announcement
Advertisement
To Top
We use cookies to ensure that we give you the best experience on our website. If you continue to use this site we will assume that you are happy with it.Ok