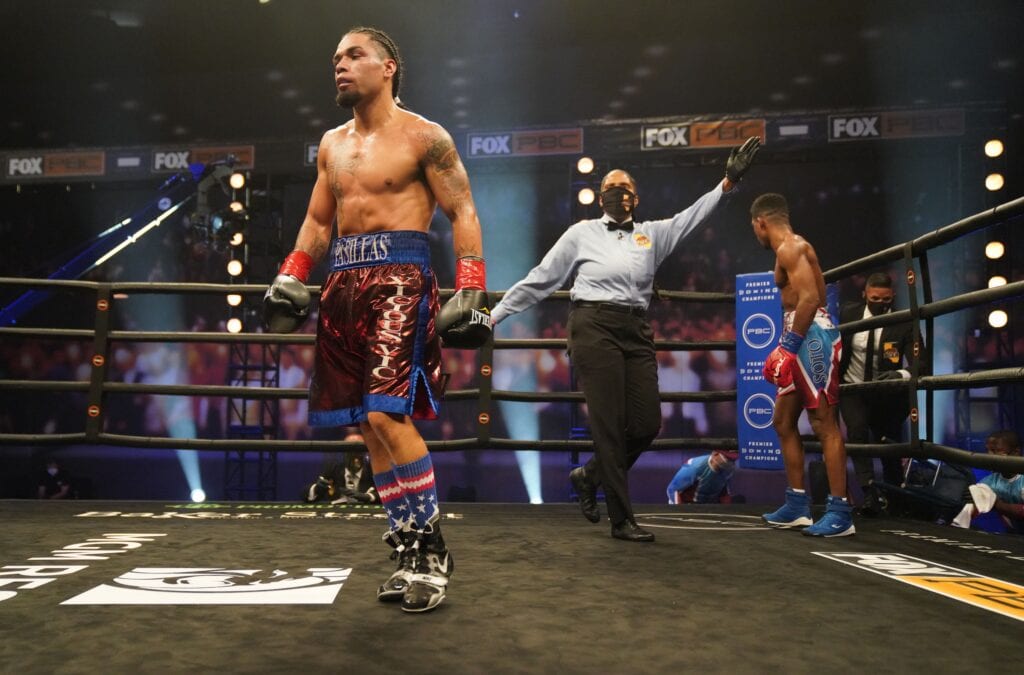 Pasillas shines in stoppage of Encarnacion

The co-main event seen on FS1 Wednesday night saw Victor Pasillas (16-0, 9 KOs) remain unbeaten with an impressive, sixth-round stoppage victory over previously unbeaten Ranfis Encarnacion (17-1, 13 KOs) in their Featherweight bout. Pasillas wanted to impress in his debut on FS1 and the East Los Angeles native did that last night.

“I’m very excited to get the victory,” said Pasillas after the fight. “Me and my coach have been back at home breaking this fight down piece by piece for 10 weeks. We don’t guess when we get in there.”

Pasillas found his distance from the outset, landing left hands in the opening frame as Encarnacion was still feeling him out. While Encarnacion had some success in round two, landing a trio of powerful straight right hands, he did so while still being countered effectively and repeatedly by Pasillas. One of the numbers that stood out for me was the final punch

Those are some of the most one-sided numbers we've seen in the COVID era. Definitely a stand out performance in time where we've seen too many fighters sleepwalk to decision wins. pic.twitter.com/RkAaBl7Z13

“I’m confident in my skills and in my corner and we showed it in the ring,” said Pasillas. “We knew he was going to load up for one shot, so we just took our time and stuck to the plan.”

Pasillas waited patiently for his moment in the sixth round, eventually breaking through in the final minute with another barrage of punches, this one punctuated by a right hook-straight left combo that put Encarnacion down. Although Encarnacion got to his feet before the count, his corner halted the fight, with referee Sharon Sands waiving it off officially at 2:29 into the round.

Vic Pasillas let his hands go knocking down Ranfis Encarnación as his corner throws in the towel pic.twitter.com/GzliRQuJWC

“I want to take over the 122-pound division,” said Pasillas. “Making 126-pounds was easy for this fight. There are a lot of great fighters at 122-pounds. Whoever wants to do it, line them up. Because I’m taking all my straps.”