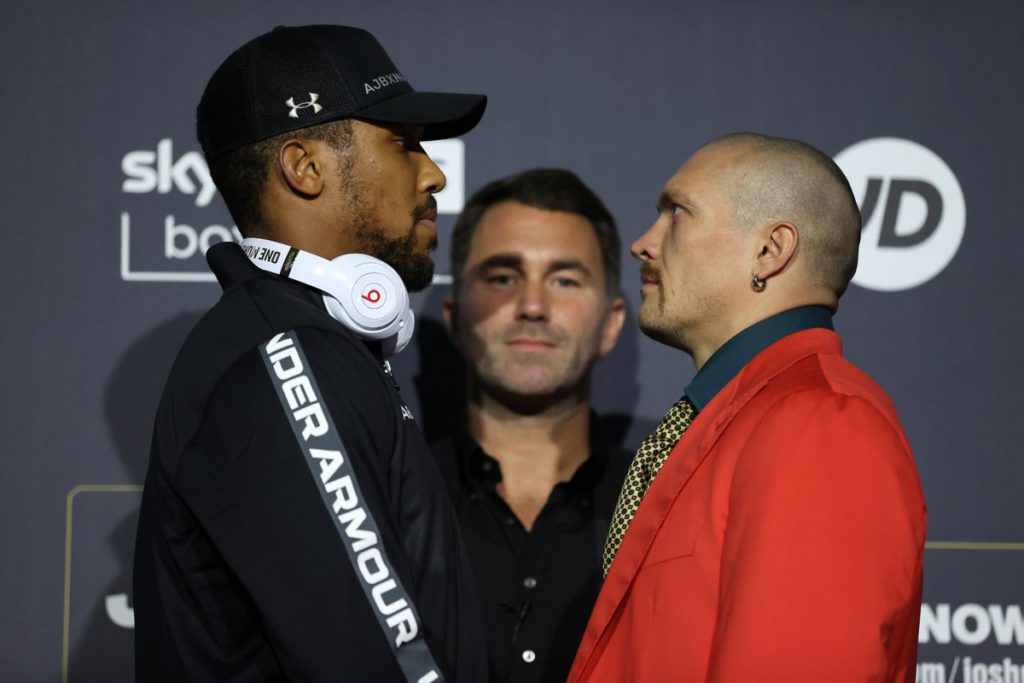 On Thursday afternoon on the grounds of Tottenham Hotspur Stadium, former Undisputed Cruiserweight champ Oleksandr Usyk of Ukraine made clear that he’s coming to knock off Unified Heavyweight Champ, Anthony Joshua of England in their Saturday night battle.

Meeting the media together for the first and only time prior to their WBA/IBF/WBO 12 round showdown in North London, Usyk was dressed with the loud fashion of a 1980s or 90s “B-movie” villain, which is also part of his sense of humor. But, when the question turned to the magnitude of this fight, the unbeaten Usyk, made it clear he knows the significance of his title challenge,

Speaking through an interpreter, Usyk said,

“Every fight makes history. And I think me and Anthony (sic) are going to make another step in history. Something later that people will be talking about. People will remember. People will be watching it on TV. And it will make history.”

The 34 year old Usyk will come off an 11 month layoff, when he steps through the ropes Saturday night. He was last in action in the Wembley Arena with no fans last October decisioning English veteran, Dereck Chisora. That was the unbeaten Ukranian’s second bout at Heavyweight and he and his team have been waiting for over a year and a half to challenge to Joshua’s titles.

The WBO has threatened Joshua, 24-1,  with potentially stripping him of their world title, if he did not fight Usyk next. He dominated and then floored IBF mandatory challenger Kubrat Pulev to score a brutal ninth-round knockout at The Wembley Arena last time out in December. That was his first fight on U.K. soil since he stopped Alexander Povetkin in seven  rounds at Wembley Stadium back in September 2018.

This will obviously be the biggest crowd (Over 60,000+) Usyk’s ever fought in front of and it’s the first time Joshua will have had a full stadium behind him, since that Povetkin bout three years ago.

Still, the British World Champ has to be feeling confident that he’s fighting a smaller fighter moving up on his home turf. Then again, Usyk has been a dominant hard punching World titleholder himself. And, therein lies the intrigue and chance at “history” that Usyk mentioned for Saturday night.