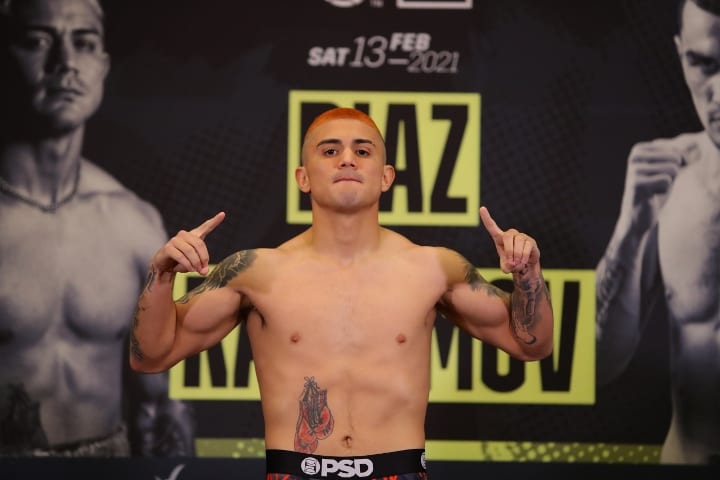 Next Up for Fortuna? How about JoJo Diaz

Javier Fortuna needs a replacement opponent now that Ryan Garcia pulled out of their contest for his mental well-being. We should know later on this week who that may be, but the frontrunner is former IBF Jr. Lightweight champion Joseph “JoJo” Diaz Jr.

I’m hoping I lock this Javier fortuna fight this week.

Diaz was last in action, taking on Shavkat Rakhimov, where he lost the IBF title he won from Tevin Farmer before the bell on their Feb. 13th contest began as he came in overweight. The fight itself closed out that night with an entertaining draw. What was left in the aftermath was Rakhimov taking on Kenichi Ogawa for the vacant title again and Diaz on a mission to fight somebody else.

But what about the weight? Diaz on Twitter knows and acknowledges this in a series of tweets Monday explaining what happened.

“I’m sorry I didn’t make the weight my last fight guys I really am. I gained a lot of weight during my time off and during my son’s time being born. I was trying to be as good as a person I can be for my girl during her pregnancy. Wasn’t really focusing on boxing at that time,” Diaz stated on Twitter.

“Putting in the work and making sure I’m maintaining my weight as an athlete and a fighter that I am. And trying to conduct myself to the best abilities I can to be at my best. This next fight, you guys will see that. I’m excited for my return. I know I let a lot of people down. But most of all, I let myself down by taking what I had for granted. But this return will be something special. I want to show the world what I’m capable of and how I can overcome these difficult times I’m having in my life. Through hard work, sacrifice, and God’s plan for me.”

“I’m gonna beat some ass my next fight. I promise you guys that,” Diaz noted.

We’ll see if that ass next is Fortuna. The fight would be at 135 pounds when made, and Diaz did note that he still has unfinished business back at 130 pounds.