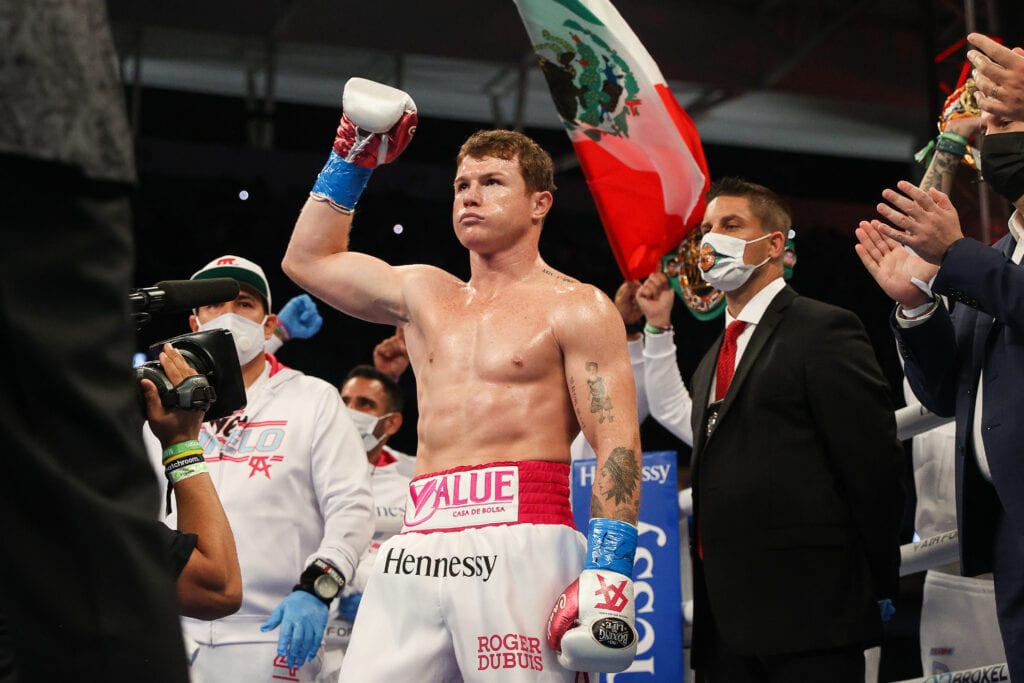 Canelo Touches Down In Dallas Ahead Of Saturday Defense

Arguably the biggest sporting event to be attended in the world in 2021 is about to take place Saturday night at the home of the Dallas Cowboys, AT&T Stadium in Arlington, Texas. And, one of sports’ most recognizable figures has arrived.

Saul “Canelo” Alvarez, the multi-division World Champ, is ready to get back into the ring for the third time in just over five months Saturday.

Pre-sale of tickets to the event have topped 60,000 and Matchroom Boxing promoter Eddie Hearn has hinted that they can have over 70,000 capacity inside the massive facility for Saturday night’s card. If if is that large, it will be, by far, the largest crowd gathering for any sport, anywhere in the world, since the Covid 19 pandemic began in March of 2020.

Canelo, 55-1-2, drew one of the biggest crowds in 2020 to anything other than the NFL with over 11,000 for his December win in San Antonio’s Alamodome against WBA champ Callum Smith. His February defense against Avni Yildirm at the Miami Dolphins Hard Rock Stadium had fewer than 10,000 in actual attendance for the essentially “stay busy” bout.

The unbeaten Saunders is a bigger test and Texas being much nearer to of Alvarez’s Mexican fan base will obviously increase the interest in this one, as well.

Alvarez and Saunders were to have fought last May before Covid-19 shut the sport down. In the meantime after, Saunders got himself indefinitely suspended by the British boxing Board of Control for comments he made on a social media video joking about domestic violence.

The combination of Alvarez being this active, the live gate from a crowd of 60,000 or more fans and the uptick of subscribers added for DAZN in the deal to televise this and subsequent fights, will be mean this will arguably be the most lucrative fight for any fighter world-wide, since the Tyson Fury -Deontay Wilder WBC Heavyweight battle in Las Vegas in February 2020.

The cliche’ is that “everything is bigger in Texas,” and with the massively popular Mexican champ, now in the state and ready to go, we’ll see just how “big” it’s all about to be.

Next Up for Fortuna? How about JoJo Diaz
Curiosity And Power For Sebastian Fundora
Advertisement
To Top