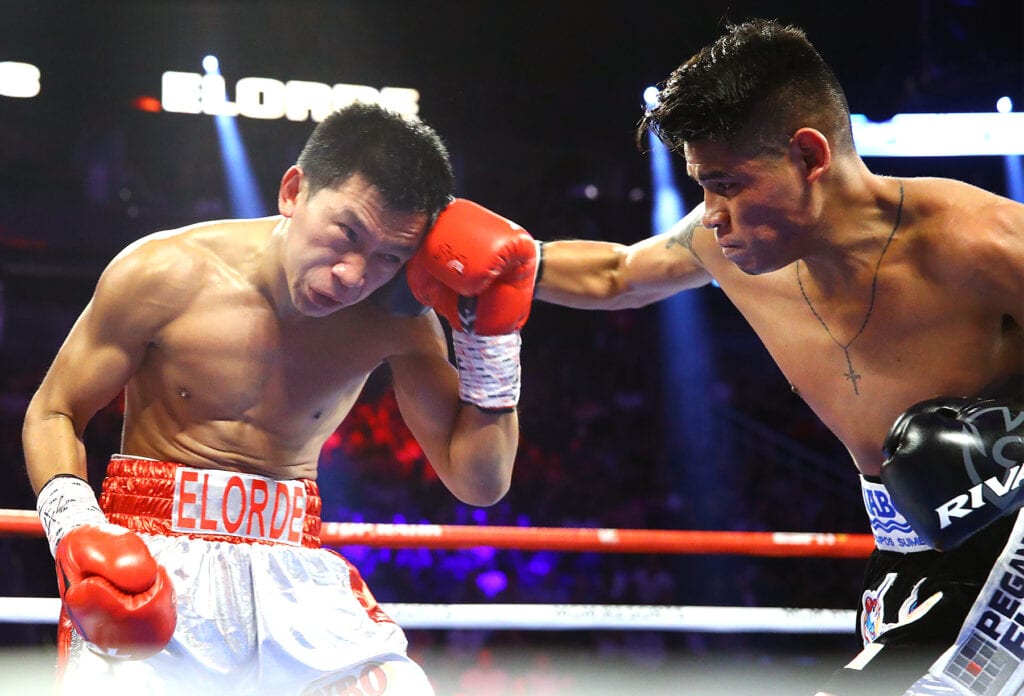 Navarrete back in action against Horta in December

Navarrete, from Mexico City, will fight in his home country for the first time since before he won the world title from Isaac “Royal Storm” Dogboe at Hulu Theater at Madison Square Garden last December. 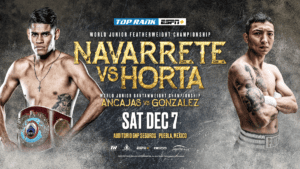 “Emanuel Navarrete is one of Mexico’s great young champions, and he’s only getting started,” said Top Rank chairman Bob Arum. “At 24 years of age, he is wise beyond his years and hungry to challenge himself against the very best. He’ll have defended his belt four times in 2019, and 2020 is shaping up to be another spectacular year for ‘Vaquero.’”

The Vaquero is back and ready to cap off a sensational year in his home country. @vaqueronarre1 will make his fourth world title defense in less than seven months against Francisco "Panchito" Horta Dec. 7th in Mexico! #NavarreteHorta | ESPN+ pic.twitter.com/TSLItPG3BB

Navarrete (29-1, 25 KOs) made his United States debut last December against Dogboe, but in 2019, he has crisscrossed the western part of the country knocking out top opposition. He repeated the deed in May against Dogboe in Tucson, Ariz., scoring a 12th-round stoppage. In August, headlining the inaugural fight card at Banc of California Stadium in Log Angeles, he stopped the then-unbeaten Francisco De Vaca in three scintillating rounds. Four weeks later, he returned on the Tyson Fury-Otto Wallin card in Las Vegas and knocked out Filipino contender Juan Miguel Elorde in four. The upset-minded Horta (20-3-1, 10 KOs), from Campeche, Mexico, is unbeaten in 13 fights dating back to 2014.

“I am very excited to close the year by defending my world title in my beloved Mexico,” Navarrete said. “This will be another dream that will be fulfilled, and I assure you another exciting fight. I always go for the knockout. I think it is best to win by knockout, and on Dec.7, the fans in Puebla will see another action-packed fight from ‘El Vaquero.’”

“On Dec. 7, the fans will get to know who I am. This will be guaranteed war because we are both Mexican warriors,” Horta said. “This is a golden opportunity. Definitely a dream that will come true sooner than expected. I will dispute the world title against the best 122-pounder in the world, Emanuel Navarrete. I will win the title at any cost.”

Ancajas (31-1-2, 21 KOs), one of boxing’s longest-reigning world champions, was scheduled to fight Jonathan Rodriguez Nov. 2 in Carson, Calif., but Rodriguez had to withdraw on Thursday of fight week due to visa issues. Ancajas, the Filipino star who won his world title in September 2016, remained in America to prepare for Gonzalez. Ancajas last fought May 4 in Stockton, Calif., knocking out Japanese challenger Ryuichi Funai in six rounds. This will be Ancajas’ first professional bout in Mexico. Gonzalez (31-2, 8 KOs), from Santiago, Chile, has fought only once outside of his home country. He has won two in a row since dropping a WBA world title eliminator earlier this year to Australian standout Andrew Moloney.

“I am ready to defend my world title in front of the great Mexican fans,” Ancajas said. “Since my fight against Rodriguez was canceled, I’ve stayed in America to train, and I am in fantastic shape. Gonzalez is a worthy challenger and has beaten good opposition to earn this title shot.”

“This is the opportunity I’ve been waiting for,” Gonzalez said. “Ancajas is a great champion, but this is my time.”