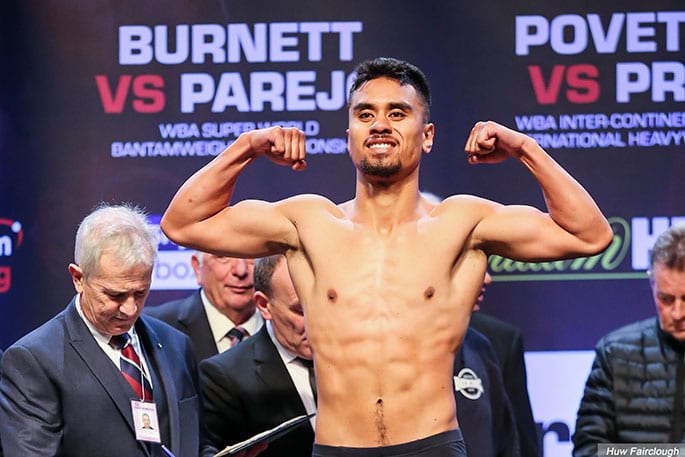 At 25 years of age and boasting a record of 14 -1 the sky is the limit for this young Warrior. The current OPBF Silver Super Middleweight champion.

Auimatagi is the old school boxer who will fight anyone, anywhere, anytime and no stranger to travelling Road Warrior. His most impressive win came on the undercard of Joesph Parker vs Anthony Joshua in Wales against a top Welsh up and comer, Morgan Jones who was 12-0.

Auimatagi opens up about his ambitions in boxing, his idols in boxing and signing with Dragon Fire Boxing;

“My biggest goals are to become the World super middleweight champion of the world one day, be inducted into the boxing hall of fame and earn enough from my career to buy a house for my parents

My two favourite fighters would have to be ‘Iron’ Mike Tyson and David Tua. Tyson because he was a beast when he was in his prime and just was exciting to watch. David Tua because hes Samoan and could pack a punch out of nowhere at any time. His killer instinct was second to none.

Team Auimatagi would like to thank all those who showed interest offered us offers. Many thanks, God bless from Grant Arkell and I.”

Iron Mose’s message to his fans; “I love you all, thank you for your prayers and support. Thank you so my sponsors past and present for having my back when no else did”

Signing with Dragon Fire is I believe a great opportunity for me and my family because I know together, we can make my dreams of becoming world champion come true. Proof is in the pudding, just look at the Moloney brothers”

Tony Tolj opens up about his latest signing;

“Mose is an intelligent, athletically gifted young man with an enormous future. He has god given natural talent; I’m privileged to be guiding him in his professional boxing career
We are very honoured to be working together with globally respected Kiwi Grant Arkell.

We are very excited for our future together and can’t wait to see what the future has in store for “Iron Mose. The sky is the limit.

Mose is a diamond in the making and that diamond is going to be shining brightly for many years to come”.

Carden Combat Sports Boxing/MMA card in June
WBC suggested use of “virtual judges” is really bad idea
Advertisement
To Top
We use cookies to ensure that we give you the best experience on our website. If you continue to use this site we will assume that you are happy with it.Ok