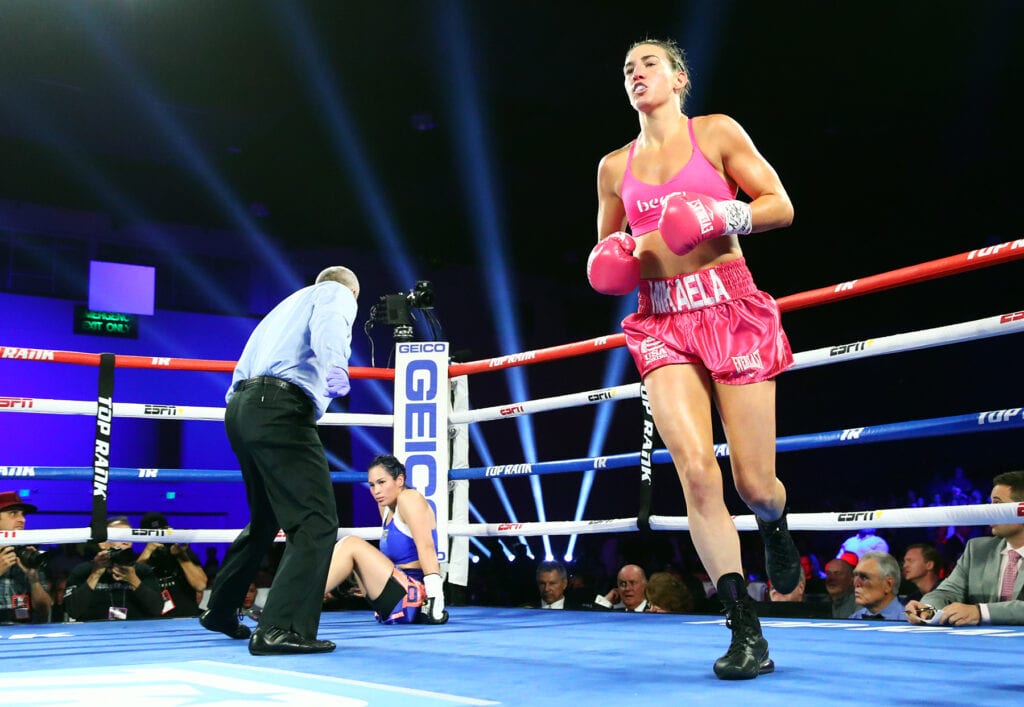 A prominent U.S. women’s professional fighter, who had to leave Las Vegas prior to her Tuesday night scheduled fight, continues her fight outside of the ring to clear her Covid-19 status.

Mikaela Mayer, an unbeaten women’s super featherweight, was to have been in the co-main event for Tuesday night’s return to boxing in the United States from Top Rank Boxing.

However, Mayer announced on Sunday afternoon that she had been told by Nevada officials that she had tested positive for Coronavirus and was not going to be allowed to fight Helen Joseph in a scheduled 10 rounder.

I am heartbroken to report that I will no longer be fighting on Tuesday’s Top Rank card due to a positive result in my COVID-19 test yesterday. It came as a complete surprise. I am currently asymptomatic and am quarantining at an off-site location per recommended guidelines. The rest of my team tested negative and they are all in good health. I was really looking forward to bringing back boxing for all of you and I’m disappointed for myself, my team, my supporters and for my opponent, Helen Joseph, who worked just as hard to be here this week and put on a show for everyone. After two hard back-to-back camps, not being able to step in to the ring both times, you can imagine how disappointed I am. However, these protocols were put into place for a reason and it's more important to care about the health and well being of my team and the people at this event. So I am complying with the rules set forth by the Nevada State Athletic Commission and Top Rank to keep everyone safe. I will just have to take a quick break but I will be in the ring soon. I appreciate all the love and support. Please tune in to ESPN on Tuesday night and support the card and all of the fighters. Boxing is back and I'll be back.🙏🏼 #boxing

Mayer maintained at the time that she had gotten the go-ahead from her doctors prior to coming to Las Vegas that she had the Covid-19 antibodies in her system, which meant she had been previously exposed, but not developed any symptoms.

Still, the Nevada officials and Top Rank promotion were not going to take any chances and when her test was positive they quarantined her and canceled the fight.

On Thursday afternoon, Mayer went on the offensive on social media saying that an independent doctor has informed her through her blood test, that while she had a positive test, she was not contagious then, or now. And, therefore, Mayer believe she should have been allowed to compete:

Received an email from physician involved in my case stating: “You are not sick & not infectious & your blood tests confirm this. Your case is the perfect example of why athletic commissions will need to change their process in the near future”#boxing

Further, as Mayer tweeted, she wants the Nevada Athletic Commission and Top Rank to examine and alter their testing procedures for all the fighters that are currently participating in June and July shows. They are doing so under the testing guidelines form the State that have been set forth for the promotion to hold shows at the MGM Resort.

Mayer has also made clear that she is willing to come back to Las Vegas and fight Joseph later in the month or even July. And, she certainly, has a stronger case now that it appears medically provable that she is not in jeopardy of giving coronavirus to anyone else.

As of Thursday night, there had been no official response yet from the Nevada Commission or Top Rank on Mayer’s rebuttal for her status and whether she’ll be allowed to fight again in the near future in Vegas?

Jason Moloney pumped for his contest June 25
Magdaleno wins in messy fight over Vicente
Advertisement
To Top
We use cookies to ensure that we give you the best experience on our website. If you continue to use this site we will assume that you are happy with it.Ok