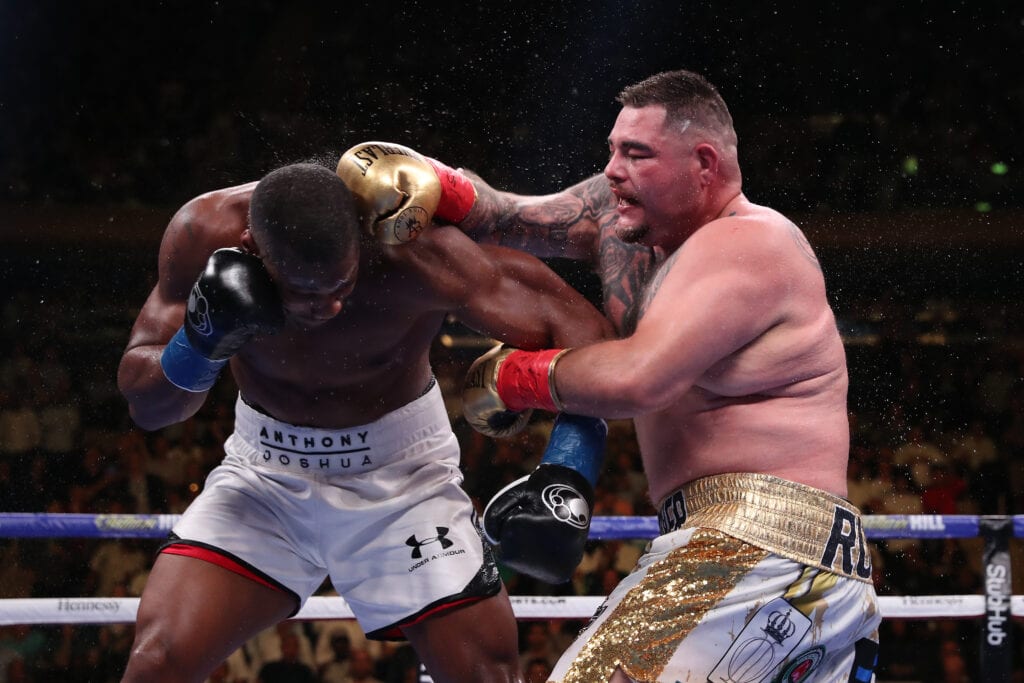 Another day and another report on the “where” for the potential Anthony Joshua-Andy Ruiz Heavyweight Title rematch later this year. And while this one might make sense financially, most people will be left scratching their heads and wondering aloud, “huh?”

This after The Athletic’s boxing insider Mike Coppinger reported on Wednesday that both the United Arab Emirates (UAE) and Saudi Arabia are in serious negotiations with Eddie Hearn and Matchroom Boxing to possibly land the Joshua – Ruiz rematch:

Will the Middle East finally land a mega fight after years of talk? There’s a very real possibility the Andy Ruiz-Anthony Joshua heavyweight title rematch heads to Saudi Arabia. I explore what it will take to bring the fight there https://t.co/9W7df9WEME

Coppinger first tweeted about the UAE trying to secure the fight Tuesday afternoon. He’s now reporting that Riyadh, Saudi Arabia, may have offered Hearn / Joshua more money and is actually the leading choice for the Middle East.

There has never been a World Heavyweight Championship fight held in the Middle East. Hence, some of the intrigue.

However, the fight would still be worth mega money in the U.K., and this may very well just simply be in negotiating leverage ploy by Hearn and Matchroom to get more money out of either legendary Wembley Stadium that Joshua has headlined in several times or the outdoor Principality stadium in Cardiff, where Joshua has also fought twice before.

We also wrote on Tuesday that Joshua and Ruiz traded insults publicly and on social media, over the proposed rematch of Ruiz’s stunning 7th round TKO at Madison Square Garden on June 1st. That’s when the little known Mexican American contender handed Joshua his first professional defeat in humiliating fashion.

Joshua talked openly Tuesday to the Sky Sports about wanting to thrive off the U.K. fans in a place like Cardiff in the rematch. Obviously, he would not get that benefit, no matter how much more money would be on the table, from a fight in the Middle East.

For his part, Ruiz has consistently said he doesn’t want the fight in the United Kingdom, because he is now the champ. He would prefer it to be at Madison Square Garden, again, or even possibly in Mexico City, at the outdoor Azteca Stadium that would seat in excess of 100,000 fans.

It’s still believed that, wherever the venue, the rematch will be happening in December, but some observers and fans are still left to wonder as each week goes by, if Joshua won’t opt to fight someone else in between getting back in the ring with Ruiz for another battle.