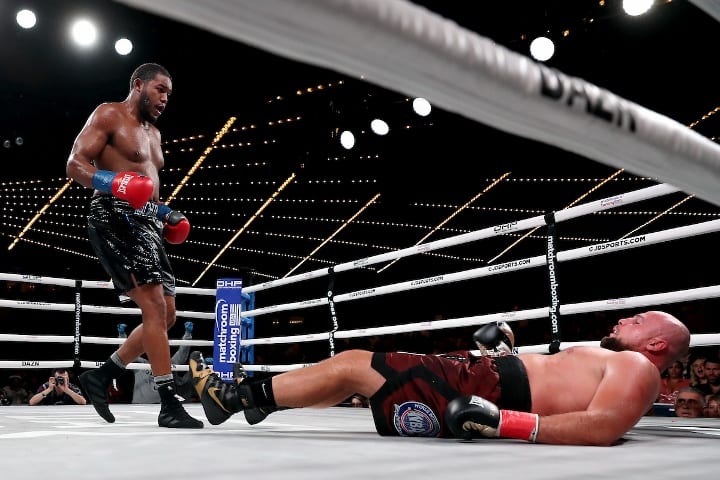 Heavyweight Michael Hunter changed course this week on a slated match against Filip Hrgovic and now is instead going to be in action against Mike Wilson instead of on the upcoming Triller card on June 19th in Miami.

Hunter (19-1-1,13 KOs) will take on Wilson (21-1, 10 KOs) in what was originally supposed to be a WBA title eliminator. In the heavyweight division, the WBA has about half the division in the title picture, so whatever on that front. But, Hunter took to social media to answer back at the fans on what gives with this matchup instead of the one against Hrgovic? One, which would have put him in the title picture via the IBF mandatory route.

“I was prepared to fight him for that. Triller just slid in with multiple fight deal worth more,” Hunter said on his Twitter account Thursday.

I was prepared to fight him for that. Triller just slid in with multiple fight deal worth more. ?

The deal with Hrgovic fell thru last week as the former boss of Hunter, Matchroom Boxing and promoter Eddie Hearn had won the purse bid for the fight.

Hearn became the promoter of record for the ordered eliminator as the lone bid during a purse bid hearing held April 20 as conducted from IBF headquarters in Springfield, New Jersey. Hearn submitted an offer of $606,666, which was split 60/40 in favor of Hunter as the higher-ranked challenger.

Hunter—a second-generation heavyweight who represented the United States in the 2012 London Olympics—was due to make just shy of $364,000. Hrgovic was to have earned more than $264,000 for the fight.

Triller came in and clearly made a better deal than Hunter accepted.

“The numbers will be public soon, buddie and its multiple fight deal,” Hunter stated on Twitter in response to the figures on the deal.

So while we wait on the actual deal that Hunter signed with Triller, we know his first opponent on the Triller card next month is against “White Delight” Wilson, who on paper doesn’t look as appealing as Hrgovic at all but seems to be the next man up for Hunter. Wilson has been fighting primarily at cruiserweight and was last in action against Gary Kopas, stopping him in 4 rounds back in 2019.

Not a fan of the fight as it gets Hunter as close to the title ,as I am writing this piece on it, but Hunter did leave offline with an essential note that bears repeating.

“As fighters, we are providing a service. We set the price & say who will get a discount, who pays full price, and who gets a free fight coupon. Not the fans nor rich promotion companies. Hope you understand, ” Hunter stated.

We’ll see where this Triller deal lands him in terms of matchups down the line.