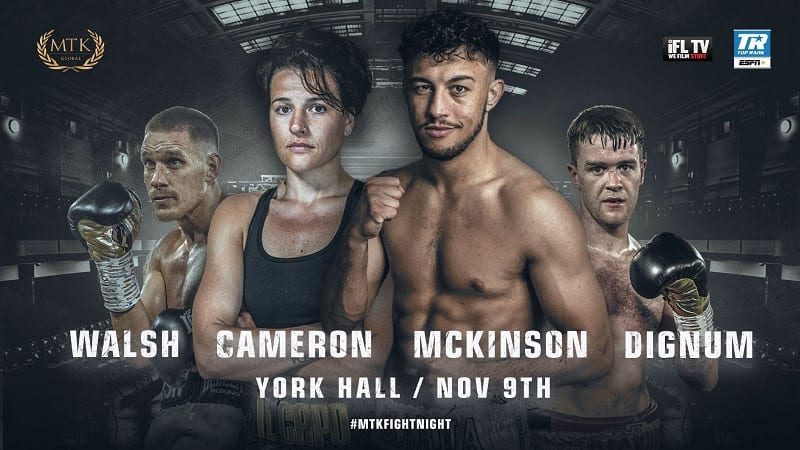 McKinson, Cameron in action at York Hall in November

MTK Global is back to making an appearance at the iconic York Hall in London on November 9 for another huge #MTKFightNight, live on ESPN+ in association with Top Rank in the United States and also live on iFL TV around the world.

Undefeated Daniel Egbunike faces Billy Allington for the vacant Southern Area super-lightweight title, plus there is another battle of two unbeaten stars as Josh Adewale takes on Michael Elliott. Rising talents Alex Bellingham, and Jack Martin are in action too.

Promoter Lee Eaton stated: “We’re delighted to be returning to York Hall with another fantastic card in November. We always love heading back to the iconic venue and it’s going to be a brilliant event.

“It’s great to have Michael McKinson in action again following his extremely impressive win over Evgeny Pavko in July. Michael is one of the most avoided fighters at welterweight and we’re expecting another elite display.

“Chantelle Cameron also returns ahead of what is set to be a very important year in her career. The showdown with Katie Taylor is one we’d all love to see, and Chantelle will make sure to produce a performance that gets everybody talking.

“Liam Walsh continues his climb back towards world level, and Danny Dignum will look to extend his unbeaten record when he takes the next step in his career too.

“Daniel Egbunike is fighting Billy Allington for the Southern Area title, plus Josh Adewale takes on Michael Elliott, and either of those incredible bouts could be the fight of the night. The likes of Alex Bellingham and Jack Martin make it a superb bill from top to bottom.”