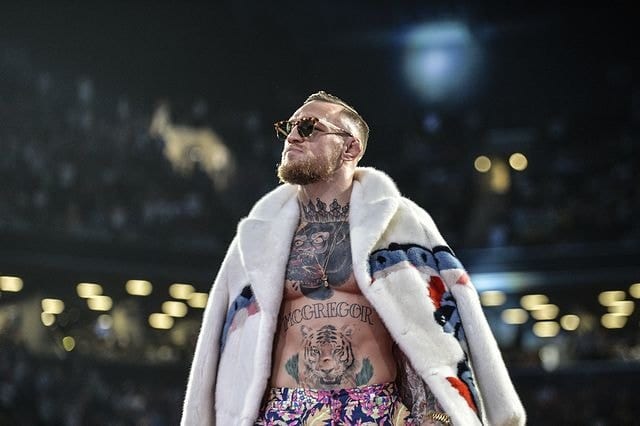 (Originally appearing on his site boxingwriter.co.uk, David Payne gives his thoughts on how a proposed McGregor-Pacquiao fight evaporated before it could ever get made.)

As blood seeped from his nose, the veneer of alpha stripped from his name and with millions of dollars leaking from his future, Conor McGregor lay prone on the canvas. Pain flooding in beneath the Trojan horse of disorientation that smothered his senses. The Irishman appeared to pause.

At first in shock but then with a sense of revelation, of the realisation that he was no longer what he was or what he thought himself to be.

Damage was smeared across his features. The malevolence of his persona hacked out by the fists of a capable opponent. Faces, familiar and new, bobbed into view. McGregor continued gazing toward the lights, perhaps beyond, like a husband outside a shop, staring to the heavens, contemplating whether he’d remembered everything on the list he’d left at home.

Dustin Poirier’s punches had pummelled McGregor’s to defeat. An upset victory that changes much in the world of MMA, and perhaps too, the boxing world McGregor was planning to return to.

For McGregor it is a loss for which the ramifications are harder to evade with merely the context, or excuses, applied to its predecessors. He was beaten at punching, not throttled or squeezed to submission. His defeat encouraged a torrent of schadenfreude from those gathered on social media.

Of the most pointed and acerbic, were the voices from within the rival circus of boxing.

When McGregor swaggered into Boxing’s biggest Big Top three years ago, bespoke tailored, F-bomb dropping anarchist that he was, he disturbed the equilibrium. Daubing graffiti on boxing’s walls. Bewitching casuals. Convincing the unprepared and riling the traditionalists. He was a Sex Pistol in a china shop.

It was a schtick that parlayed his MMA profile in to a $100million purse for a match with Floyd Mayweather.

McGregor’s success, commercially, promotionally, posed uncomfortable questions of a sport creaking beneath a culture of risk averse attractions and nefarious organisation. How could a brazen brawler from another sport become the biggest name in boxing? Why could he summon such interest and frenzy? A sport that gave us Sugar Ray, Jack Dempsey and Iron Mike shouldn’t need somebody else’s Barnum to have them rolling up.

Mayweather was luxurious in his generosity. He carried the interloper for 10 rounds. Was hit once.

The tiger of MMA became the ball of twine between Floyd’s paws. It was hoped, by many, that the clamour for him to perform in a boxing ring would relent and boxing could return to its own duplicitous perversion. That purist notion overlooked the siren call of that $100million purse he plundered in soporific defeat to Floyd.

It wasn’t long before new foes were mooted or foes mooted McGregor. Most notable of all, 40 something Manny Pacquiao. The chaser became the chased.

After all, why would Manny pursue Errol Spence for a share of $20million, when he could chase the Notorious one and earn double for a fraction of the risk? Maybe treble and a very small fraction at that. McGregor inverted the algebra. He too could earn a baker’s dozen of MMA fees in one night.

Defeat will douse the whimsy. But it doesn’t extinguish those deeper questions.

It is the discomfort those questions cause that encourages this observer to embrace news veteran Manny Pacquiao will now turn to Ryan Garcia, a 22 year old lightweight superstar, for his next bout. Yes Pacquiao is 42 and we can only speculate how he remains so competitive in to his dotage but the fight is a mesmerising throwback. Posing questions, demanding opinion.

Garcia will be leaping levels, even from Campbell, maybe a weight class or two, while unbeaten and aged just 22. Easier tasks abound. It is bold to chase Pacquiao and defies modern convention. There is risk for both, uncertainty, the unknown. The real possibility of defeat, of humiliation.

Boxing needs more daring like this from its leading acts. It is the type of daring, a cocktail of mischief and self belief, that served McGregor well.

Perhaps Garcia is an example of a new breed of leading man. One more in tune with an attention starved generation impatient for action and with little tolerance for boxing’s destructive idiosyncrasies. A handsome successor to Golden Boy, Floyd and that fecker from Dublin.