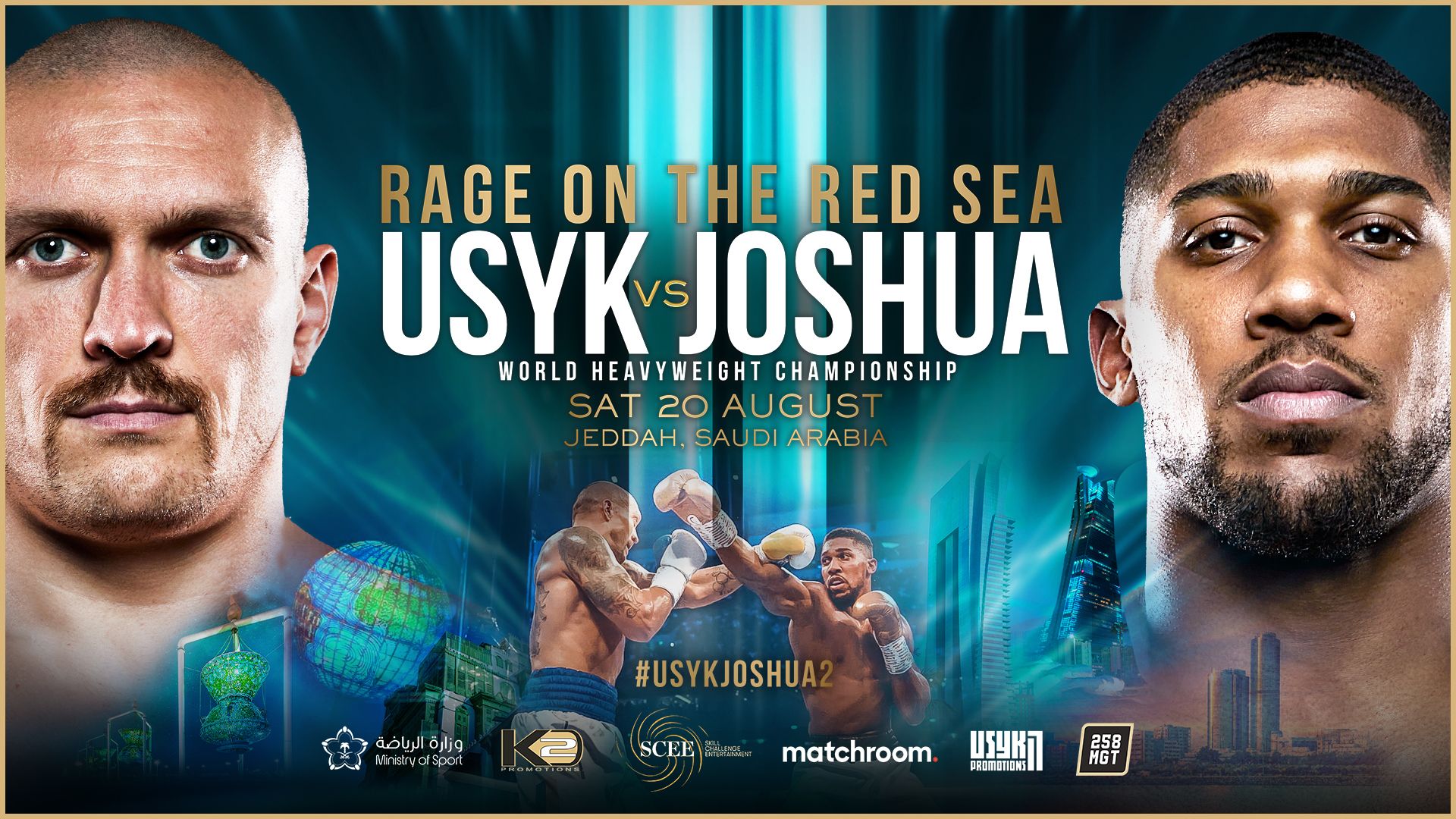 What has been rumored for weeks is now apparently going to happen in August. Oleksandr Usyk will defending the unified heavyweight title in a rematch against former champ Anthony Joshua in Jeddah, Saudi Arabia on August 20th.

Matchroom Boxing made the official announcement on Sunday afternoon that the sequel will be happening in the Middle East after Usyk upset Joshua in September at Tottenham Hotspur Stadium in north London last September,

From the official release:

“Unified Heavyweight World Champion Oleksandr Usyk will put his IBF, WBA, WBO and IBO World Titles on the line against Anthony Joshua in the coastal city of Jeddah, Kingdom of Saudi Arabia on Saturday August 20.

One of the biggest Heavyweight rematches in the history of the sport, Usyk vs. Joshua 2, billed ‘Rage on the Red Sea’, will take place nearly three years on from the historic ‘Clash on the Dunes’ event at the Diriyah Arena that saw Joshua reclaim his Heavyweight crowns against Andy Ruiz Jr.

Under the patronage of HRH Mohammad bin Salman and in line with the Kingdom’s Vision 2030 ambitions, the eyes of the sporting world will be on the Kingdom of Saudi Arabia once more as ‘AJ’ aims to exact revenge over Usyk and take his place back at the top of the Heavyweight division.

Joshua (24-2, 22 KOs) was dethroned as Heavyweight King by Ukrainian pound-for-pound star Usyk in September 2021 in front of over 60,000 at the Tottenham Hotspur Stadium in London, England on a memorable evening in boxing’s marquee division.

Since the pair’s first meeting, former Undisputed Cruiserweight World Champion Usyk (19-0, 13 KOs) has gained further global attention after putting the rematch on hold to support his home nation on the front line during their ongoing conflict.

Usyk said: “I have a goal, with the help of the Lord I will complete my mission!”

“Fighting championship level back to back has had its pros and cons, but I decide every day to get stronger, to learn from my experiences and grow. A happy fighter is a dangerous fighter and I am the happiest and most motivated I have been.

“Thank you to the organisers, to 258MGT, Matchroom Boxing and to all the boxing fans across the world, with a special shout out to the Ukrainian fans who have been through a really tough time.”

Prince Khalid bin Abdulaziz, Chairman of SCEE, said: “This is another proud moment for the Kingdom of Saudi Arabia bringing the biggest rematch in global boxing to our great country. Oleksandr Usyk and Anthony Joshua are both brilliant champions with different stories, skills and styles and the whole world will watch them go head-to-head in the ring on August 20 – we look forward to welcoming them.”

Eddie Hearn, Chairman, Matchroom Boxing, said: “We are thrilled to get one of the biggest Heavyweight rematches in boxing history made and give Anthony Joshua the chance to reclaim what he lost in London last September. Everything is on the line for this Unified World Heavyweight Championship bout and it could not be a bigger contest. We know Oleksandr Usyk is a great fighter and we saw that last time out, but I know Anthony Joshua is more determined than ever.

“It was a huge success to host Anthony Joshua’s contest with Andy Ruiz Jr. in The Kingdom of Saudi Arabia in 2019 and we are looking forward to working with the country again to stage this historic event. So, no doubt all eyes of the world will be on the ring come Saturday August 20th. This is a story of redemption, and the countdown starts now.”

Alexander Krassyuk, Usyk’s Promoter, said: “The rematch is on the way. The fight will be much bigger and more spectacular than the first. It is new history in the making. Being a part of this event is a huge honour. Our country is now fighting for its heritage. Our mission is to expand its legacy. With the help of the Lord we will achieve this.”

It’s believed that the winner of Usyk-Joshua will next face unbeaten WBC Heavyweight Champ Tyson Fury in an undisputed title bout likely for early 2023.