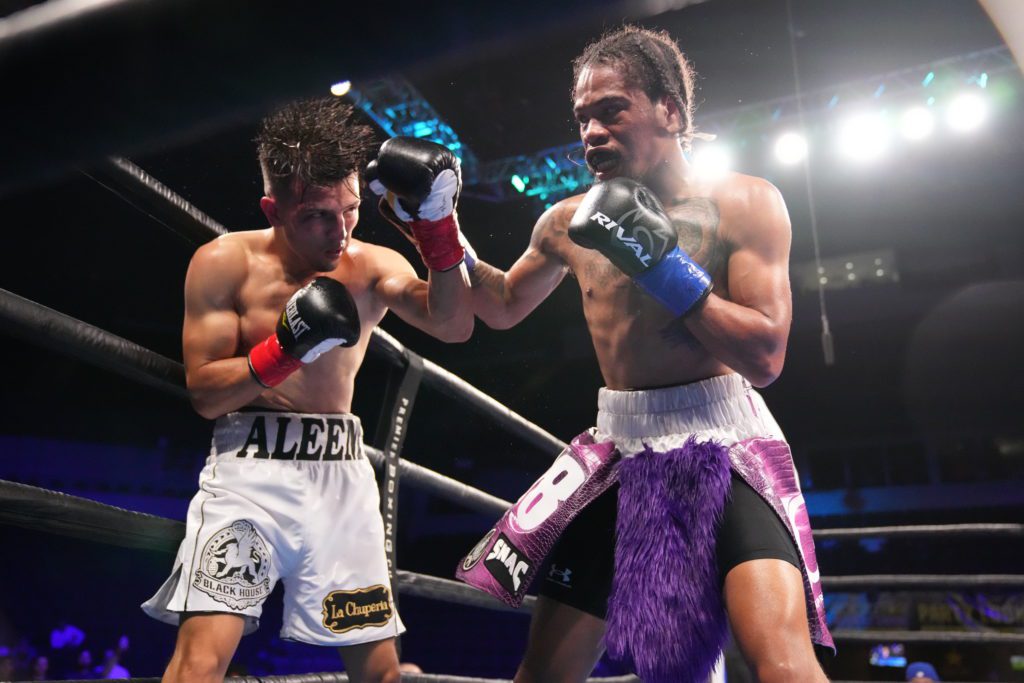 Undefeated prospect Maliek Montgomery was victorious over Aleem Jumakhonov Sunday night as he scored a unanimous decision in the action-packed 10-round featherweight showdown that headlined FS1 PBC Fight Night and on FOX Deportes from Mechanics Bank Arena in Bakersfield, California.

In a bruising performance that saw him go the distance for the first time as a pro, Montgomery (11-0, 10 KOs) was able to hold off a determined and heavy-handed Jumakhonov (9-4-2, 5 KOs) with an impressive combination of skill and determination.

“I feel great right now,” said Malik Montgomery. “Me and coach Kenny Porter and my whole team, we had a great camp and we were prepared. I’m thankful for the opportunity and I feel really good.”

Montgomery showed off both orthodox and southpaw stances and threw a high volume of punches from the start. According to CompuBox, Montgomery landed 339 punches compared to 185 for Jumakhonov, including a 68 to 16 discrepancy in body shots landed.

“I’ll tell anyone that we have the best team in the business,” said Montgomery. “With the conditioning we do in camp, the actual fight is the easy part.”

Jumakhonov had some success when he was able to navigate inside of Montgomery’s reach and blunt the impact of his punches. While he was forced to take punishment in accomplishing this feat, it put him in a position to keep Montgomery honest with counter punches.

After referee Jack Reiss implored Jumakhonov that he needed to see more from him to keep the fight going heading into round nine, Jumakhonov responded with his best moment of the fight, connecting on a massive overhand right that temporarily buckled Montgomery.

The unbeaten Montgomery was able to recover from the temporary stumble and continued to push forward through the exciting final two rounds and clinch the unanimous decision, with scores of 100-90, 99-91, and 98-92.

“I felt good tonight,” said Montgomery. “We’ve been ready for 10-round fights four fights ago. Going the distance and getting the recognition I deserve is a blessing.”

Known for being in action fights, Juarez pushed forward early and often, landing numerous big power shots in the opening rounds, snapping his head back consistently. However, Lopez was able to withstand that early storm and worked hard to stay in the fight and offer return fire against his oncoming opponent.

In his first outing since his first career loss back in June, Juarez was the more accurate and effective puncher statistically, out landing his opponent 195 to 103 with a 35% to 22% advantage in accuracy.

Late in round five, Lopez finally cracked under Juarez’s potent attack, as a perfect right hand connected and sent Lopez down with less than a minute to go in the frame. Juarez stayed composed in the final rounds and continued to inflict punishment on his way to a unanimous decision by the score of 80-71 and 79-72 twice.

It was the third-straight win for the 19-year-old Barrientes, who kept up an impressive pace throughout the bout, using his length to fight off his jab effectively. Barrientes was able to land numerous power shots and control the fight, including eye-popping blows in rounds two and four that sent Torres’ mouthpiece flying.

Barrientes continued to increase the pressure as the fight went on, landing a fight-high 26 punches in the sixth round. After the conclusion of that sixth frame, all three judges saw the bout in favor of Barrientes by the score of 60-54.