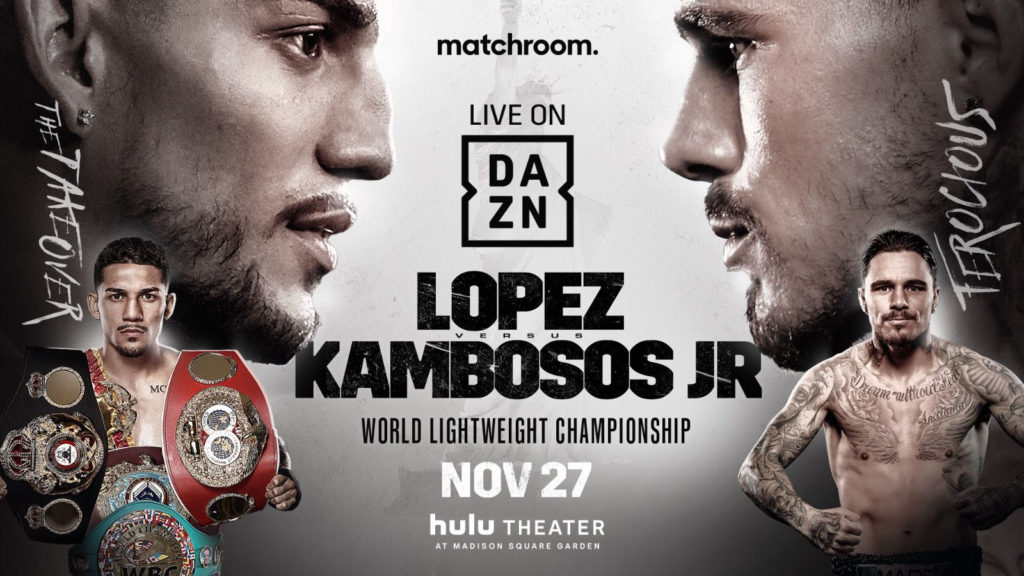 Lopez-Kambosos Set For DAZN In November

Lopez’s first fight since upsetting former champion Vasiliy Lomachenko in October 2020, the Brooklyn native beat the Ukrainian by unanimous decision, taking with him the prized straps and unified crown. Australian Kambosos Jr. comes into the fight as the mandatory IBF challenger, also boasting a perfect record and coming off the back of a split decision win against former IBF Featherweight Champion Lee Selby.

“The time has finally come!” said López. “It has been a long wait for Team Takeover. We’ve been in the zone for six months and counting but we’re pleased to be able to finally get this fight on DAZN! The Takeover will show the world once again why we are called ‘The People’s Champ’.”

The Wait Is Over ⏰
López. Kambosos Jr.

Live on DAZN on November 27 at Hulu Theater at Madison Square Garden in New York 👑 pic.twitter.com/j7ClV2kEel

“It has been a long time coming, I have been patient but ready and I have continued to perfect my craft, leaving no stone unturned to be victorious and win all the belts,” said Kambosos Jr. “I’m very excited to be headlining my biggest fight of my life on another great Matchroom card against Teofimo López after earning this opportunity last year by becoming the IBF mandatory and world number 1 on another great Matchroom show. I know they will give this fight the respect it deserves and I will shock the world and be crowned World Champion on November 27 in New York City.”

“I am delighted to be bringing Lopez vs. Kambosas to DAZN and Madison Square Garden,” said Matchroom Sport Chairman Eddie Hearn. “This rivalry has been cooking for a long time and now we finally get to see them put it to bed in the Big Apple.

“Teofimo is one of the big young stars in the sport but George is a hungry proud Aussie who knows that this is the chance to put his name amongst the elite of the game.

“The Lightweight division will catch fire once again at the end of 2021 with Devin Haney set to defend his WBC crown in December on DAZN after Teofimo and George tangle; the winter schedule on DAZN is unrivaled and this fight is one of the best out there at the end of this year.”