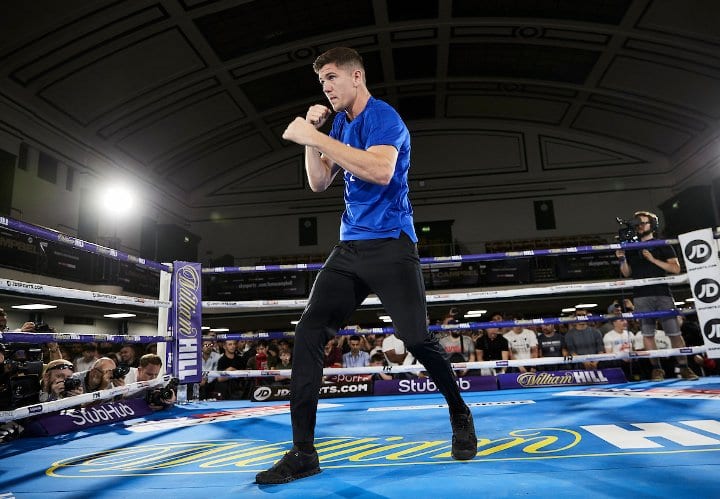 Late morning Thursday in London, unified lightweight champion the Vasiliy Lomachenko and Challenger Luke Campbell met the media for the final time before their title fight Saturday night at the O2 Arena.

And, during a photo op with the championship belts that will be on the line, a humorous moment occurred involving the champ feeling slighted about the WBC Title:

Lomachenko already owns the WBA and WBO championships and the fight Saturday night is for the vacant WBC version of the 135-pound title. Campbell (above at a Wednesday public workout) is their number one ranked contender and, the fact that he was already holding the belt while standing next to Lomachenko made Lomachenko jokingly grab for it/want to share it for publicity.

Of course, this is not the first time this summer they controversy involving a final press conference and the holding the championship belts has become somewhat of a humorous story.

Two days before Anthony Joshua put his Unified Heavyweight belts on the line June 1st against Andy Ruiz in New York, he allowed Ruiz to hold the title belts and be photographed and videotaped with them:

There are many lessons every fighter can learn from Joshua vs Ruiz. Never underestimate your opponent, and never.. EVER! Let another man hold your Championship belts BEFORE a fight! Or he'll be holding them after.. #JoshuaRuiz pic.twitter.com/oFEUylmmCW

Many said at the time and after the fact, that it was like Joshua was telegraphing too much respect for his opponent and that the championship belts themselves maybe didn’t mean as much to him, as to Ruiz or anybody else. Ruiz went on to stun Joshua with a 7th round TKO and take the titles.

Back to Lomachenko, he’s looking to defend his lightweight titles, yet again, as he’s already a three divison World Champion in just 14 professional fights.

That’s when he defeated Colombian Jorge Linares by 10th round TKO at Madison Square Garden to capture the WBA belt. Lomachenko has since defended it twice, including against England’s Anthony Crolla, whom he dispatched in four rounds in April in Los Angeles.

Campbell is also the former 2012 London Olympic gold medalist in the bantamweight division, and is 20 – 2 with 16 KOs to earn the number one ranked Lightweight designation by the WBC.

And, he obviously felt that entitled him to hold their belt.