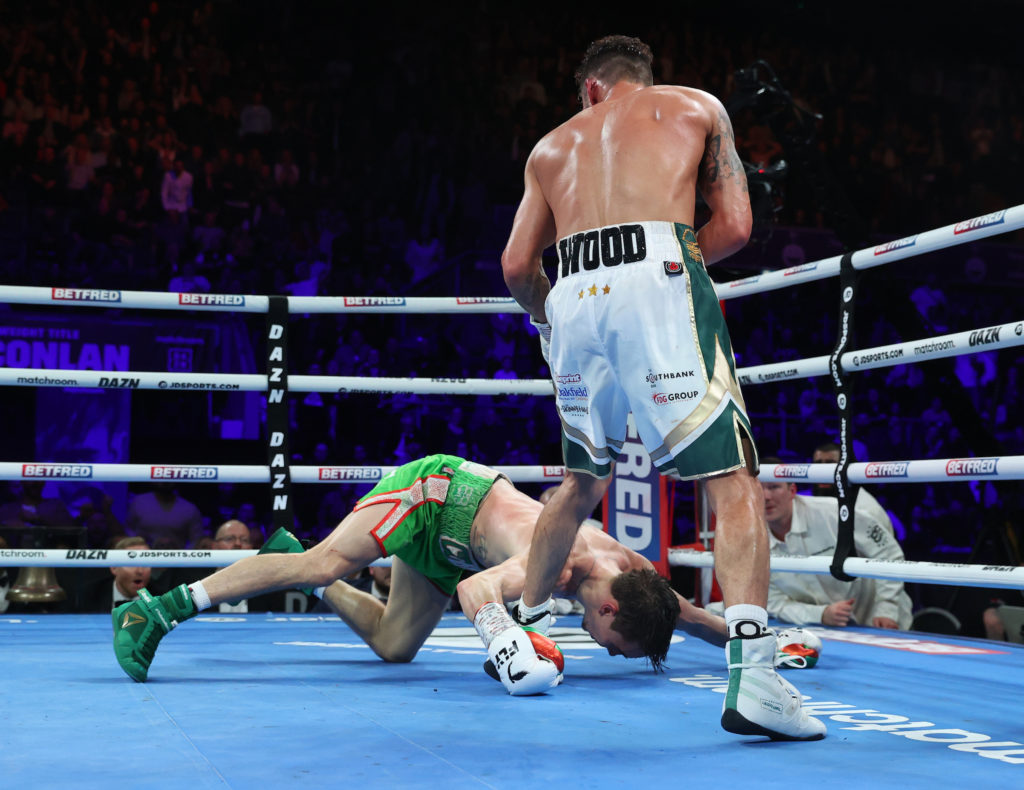 Just like his last bout that ended with a thrilling last round KO of China’s Xu Can, Nottingham, England’s Leigh Wood saved his best last in another 12th round stoppage of previously unbeaten Michael Conlan.

The bout capped the Matchroom Boxing main event at Nottingham’s Motorprint Arena with the crowd in a frenzy, as Wood literally knocked Conlan out while remaining upright for a half second. Then, the Englishman hit him hard twice more knocking Conlan through the ropes completely and ending the bout.

Fighting for the first time since the Can KO win at the Matchroom Boxing headquarters in the late July “Fight Camp” main event last July 31st, Wood had to get off the deck early just to stay in the fight. This after the Irish Olympic Bronze Medalist scored a knockdown with a left hook in the first round.

Wood, now 25-2, survived, even after Conlan had scored to his body and landed a left hook to the head late in the first frame. Conlan also rocked Wood early in the second round with another left hook and it looked like Irishman in enemy territory would win early.

Still, Wood held on some and fired back to survive the second round and stayed in the fight. But, Conlan remained in control until the late stages before he began to tire.

Being bolstered by the chanting home crowd Wood scored an 11th round knockdown of Conlan with a left hook. Although, he didn’t know it for sure, Wood was either barely trailing or tied headed to the championship rounds. But the 11th round knock down foreshadowed the 12th round dramatics that ended it.

Conlan suffered the kayo in a frightening moment, as his unconscious body flopped under two of the four ropes and landed near his father and his cornermen outside the ring. Referee Steve King didn’t bother to count Conlan out, waving the fight off with Conlan still laying unconscious outside the ring.

“I hope Michael is all right I can’t celebrate until I know he is all right,” Wood said to DAZN streaming after the bout.

Conlan was taken to a local hospital, but was not believe to have suffered serious injury.

So, Wood now looks for another prominent fight after two title victories by late stoppage. Meanwhile, Conlan’s blemish on his now 16-1 record means its back to basics and a “tune up” type opponent to get him  some confidence back.

Handed his first defeat, Conlan updated his fans on social media that he had not been hurt seriously in the KO loss and that he was expected to be released at some point Sunday morning.