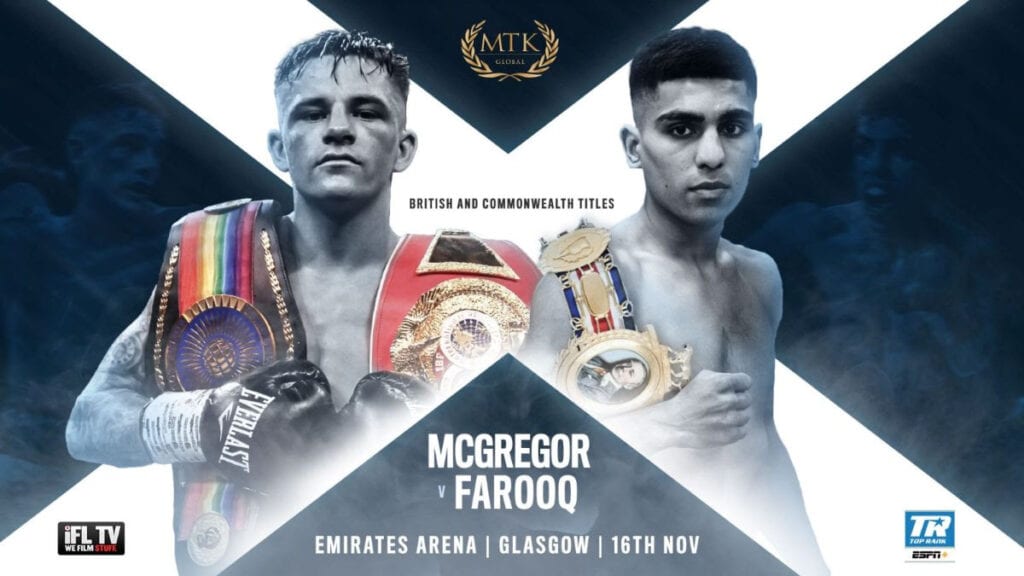 Lee McGregor is in action and this time it’s against British champion Kash Farooq in what will be Scottish boxing’s biggest night for more than a decade.

McGregor (7-0, 6 KOs) and Farooq (13-0, 6 KOs) will collide on the #MTKFightNight at Glasgow’s Emirates Arena on November 16 – live on ESPN+ in the United States in association with Top Rank and on iFL TV worldwide.

The event harks back to Alex Arthur’s title clashes with Willie Limond, Craig Docherty and Ricky Burns in 2003, 2005 and 2006 respectively and with an American audience now set to supplement huge domestic exposure, both men know the stakes are high.

Put simply, this is Scottish boxing's biggest fight for well over a decade…

Edinburgh’s McGregor said: “I know it’ll be the hardest fight of my career and I would say the same goes for Kash. I know it’s going to be a tough night but I’m going to be fully prepared for it.

“When I was a kid, myself and my Dad used to watch British title fights and he told me back then: ‘I want you to win that title.’

“This is the biggest fight in Scotland for a long, long time. You have to go back to Alex Arthur’s reign to find a comparison. It’s massive for me, for Kash and for all the Scottish boxing fans.”

Glasgow’s Farooq said: “This harks back to the golden days of Scottish boxing. There’s no bad ‘beef’ – it’s just simply going to be a great night for the sport in our country.

“Two Scottish fighters facing each other for these two prestigious titles is a rare occasion and it’s great to be sharing the ring with Lee McGregor.

“I think the place will sell out quickly and everyone in Scotland will tune in to watch.”

McGregor won the Commonwealth belt with a stoppage of Thomas Essomba back in October while Farooq claimed the British belt by blasting aside Jamie Wilson within a round back in September of last year.

Blood, Sweat and 50 Years- Padilla takes on Thomas
Ruiz says he would’ve fought in the UK
Advertisement
To Top