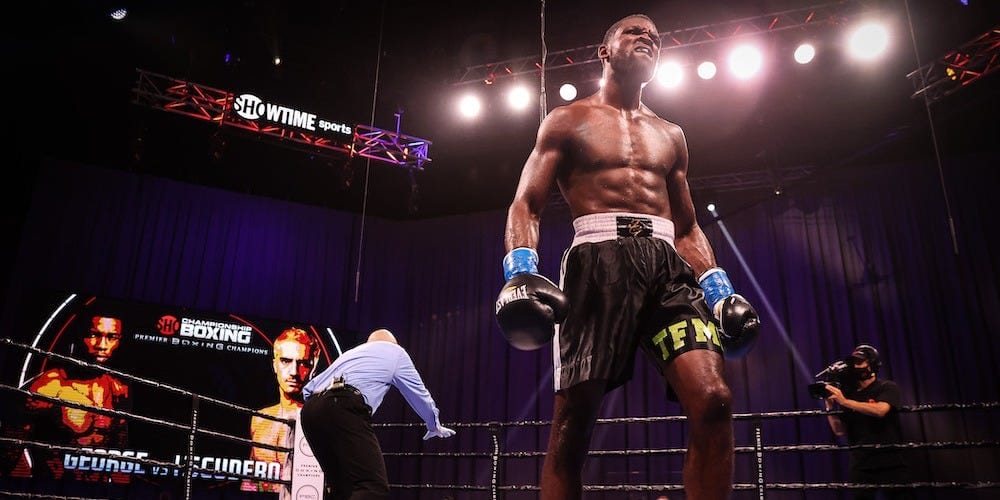 Nearly 48 hours after Premier Boxing Champions resumed its fight series on Showtime premium cable in the U.S., the buzz continues over a brutal one punch KO during Saturday night’s undercard at the Mohegan Sun Casino in Connecticut.

Most in the boxing world did not know much about the name Joe George before his Saturday Light Heavyweight showdown with Marcos Escudero. But, rest assured, after landing this lethal left uppercut that has since gone viral on the internet, he is known now:

Joe George KOs Marcos Escudero with a massive uppercut in Round 9. pic.twitter.com/dVdWogdfwe

This fight was a rematch of a controversial bout last November, where the Texan George scored a split decision win over Escudero in Las Vegas. Angelo Leo won the main event on Showtime with an easy 12 round decision over Tremaine Williams for the WBO 122 lb. title.

Now, there was a bit of irony to George landing that wicked shot when he did. That’s, because Ecudero was out-boxing and out-scoring him through the first 8 of their scheduled 10 rounds and seemed to be on his way to a revenge decision victory. Two of the judges had him comfortably in front at the time.

However, that’s what makes boxing different, in that no matter how far you are behind, one punch can change or end everything.

And clearly, Escudero’s “lights were out” on the way down and the “double-impact” of him hitting his head on the hard canvas made an even scarier impression.

Interestingly, George, who is 11-0 with 7 KOs, had not scored a knockout of any kind in his previous three fights. You had to go back to September of 2018, when he dispatched George Shepherd in the very first round in Ft. Myers, FL.

Then, on Saturday night, the big blow got recognition from a prominent PBC fighter and fellow Houston resident,

WE WANT JOE GEORGE WITH US.. BEEN KNOWING KID FOR YRS.. FROM HOUSTON, TX @SHOsports THATS A LION

👀👀 That KO by Joe George #ShowtimeBoxing

We will see how soon PBC has George, who turned 31 years old last Friday, back in action with their multiple fight cards coming over the next few months to end 2021.

And, one thing is for sure, any future opponent better be ready for him to dip left and launch the left uppercut, as Escudero found out the hard way Saturday.

Carroll not taking Hughes bout lightly
Raiders “no fans” decision spell end of Fury-Wilder in Vegas?
Advertisement
To Top
We use cookies to ensure that we give you the best experience on our website. If you continue to use this site we will assume that you are happy with it.OkPrivacy policy