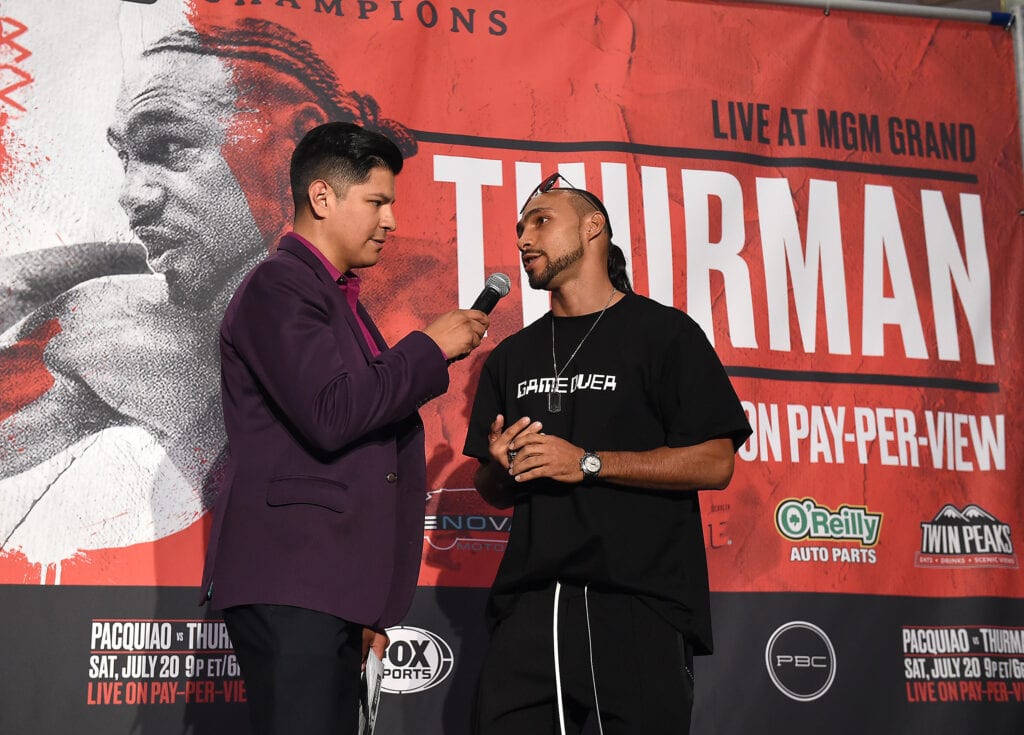 Former welterweight champion Keith Thurman is finally back in action in 2022 when he takes on Mario Barrios Saturday, February 5, 2022, at the MGM Grand Arena in Las Vegas, Nevada.

“Been a long time coming, we ain’t injured no more” was the opening salvo from Thurman on the virtual media call Wednesday.

That long time was exacerbated with numerous delays ranging from recovering from surgery following the loss to Manny Pacquiao to the pandemic as the grocery list of reasons Thurman explained to the media the layoff since July 2019.

“It’s not ideal to have a layoff like I had, but you just have to roll with things in life. I’ve spent a lot of time meditating and prioritizing different things. Now the date is set and I can’t wait to get back in action. I truly love this sport., ” Thurman noted.

“Now we’re gonna get that ball rolling and I have all the admiration to perform three fights (in 2022) if I can do it, to make up for lost time.”

I’m here to prove that I’m not the kind of fighter that you can write off. I might have fallen, but you best believe I’m going to rise again. #OneTime pic.twitter.com/Lvc9gWpF9h

Those who followed me on social know, that I was anticipating this media call for one reason and one reason only. The Clearwater native Thurman may have been out of the ring for a hot minute, but he’s still one of the best talkers in the sport. Don’t believe me? How many fighters are rattling off Macho Man Savage lines to promote their fight?

“I’m here to prove that I’m not the kind of fighter that you can write off. The cream is going to rise to the top. I might have fallen, but you best believe I’m going to rise again. This year is about doing what I have to do to be at the pinnacle of the division.”

More importantly, Thurman graced the media with a third-person answer which will be the backdrop of this fight next February.

“There’s no test better than a Keith Thurman test. You don’t step to Keith Thurman if you don’t want to make a name for yourself at 147. We have two fighters coming off of losses, which means we both have to prove ourselves. The time is now. Talk about the past if you want, but on February 5, new stories will be created,” Thurman stated challenging his inner Rickey Henderson.

Ain’t no party like a “one-time” party and doors open February 5 to see if this is the long-awaited re-return or the last run of Thurman.
Continue Reading
Advertisement
You may also like...
Related Topics:Featured, Keith Thurman, Mario Barrios