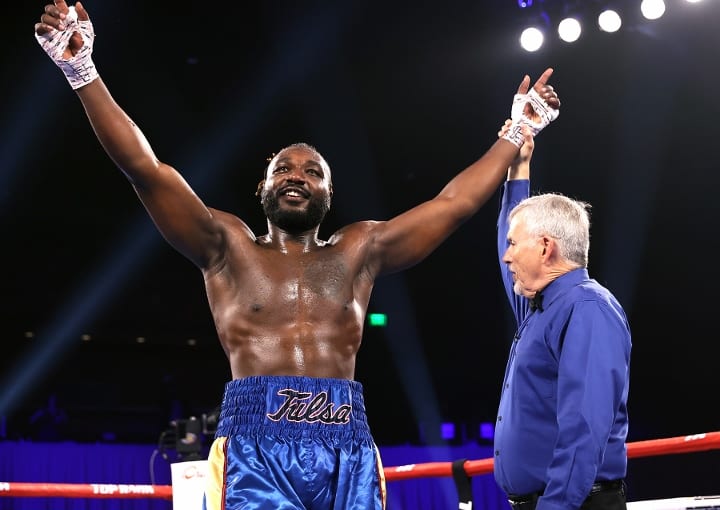 Keep an Eye On Jeremiah Milton

Heavyweight prospect Jeremiah Milton made his hometown debut this past Saturday. It was quick work in the ring as he left Jayvone Dafney hanging on the ropes in route to a first-round stoppage at the Osage Casino in Tulsa, Oklahoma, on ESPN+.

No, he seriously left Dafney hanging on the ropes following a right, leaving him out on his feet and held up in between the ropes. Instead of hitting a defenseless Dafney, he looked to the referee, who woke up and decided to call the fight over. Milton explained on his social media why he didn’t take the open shot.

“At the end of last night’s fight, I didn’t expect to see the reaction from the people. In the moment I made the decision that the fighter might not be a threat anymore, I didn’t lower my guard. I promise to always bring the action. I felt good about my decision. #control,” – Milton tweeted after the fight Sunday.

We’re picking up on a theme here tonight …

Second fight, second Heavyweight KO1. This time it was Tulsa’s own Jeremiah Milton, who literally put his man out on his feet. ?#SmithVlasov | Undercard on ESPN+ pic.twitter.com/Iigo54sv3W

That control is what led Milton to victory, but so was the right he landed. I wrote about his pro debut in Detroit, where that same right made the same highlight-reel knockout over Dennis Vance Jr.back in August. Milton reflected on fighting in front of the hometown hopeful.

“It was very special to perform on the biggest stage with my people right there with me,” said Milton. “This show will always hold a special mark in my career as a turning point for things to come. Tulsa is in the mix of becoming a big boxing town, and I’ll do my best. I plan on being a big part of that.”

As this was his third pro fight, I expect to see more of these knockouts as he moves up the ranks. Milton is one to keep an eye on with the current crop of heavyweight prospects in the United States.