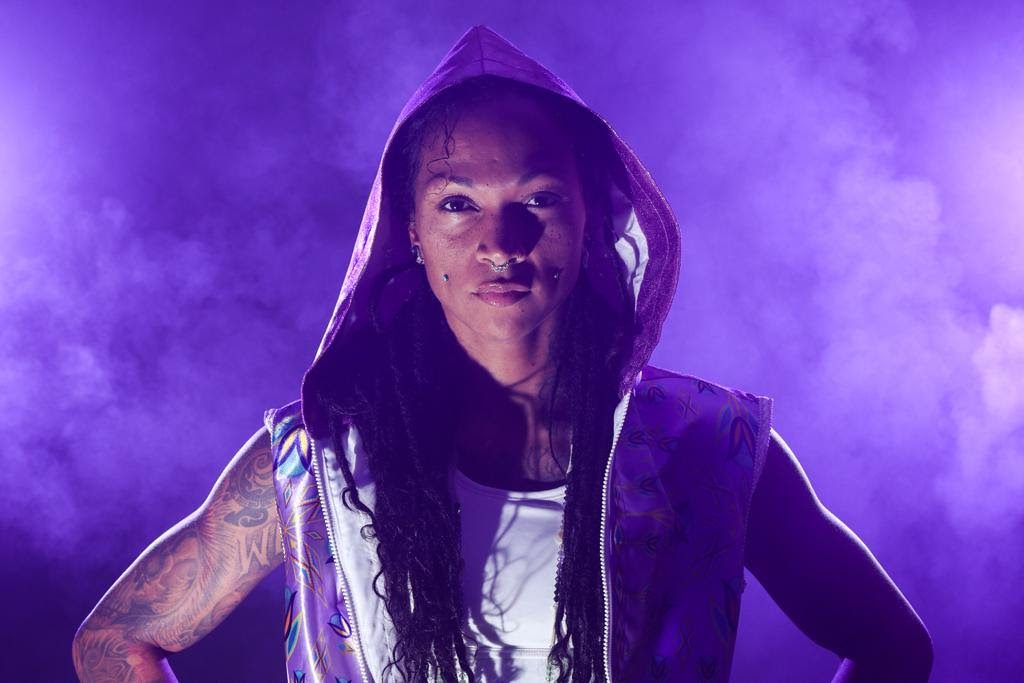 Kali Reis says there’s no chance of her looking past ‘dangerous’ Jessica Camara as they clash for the WBA and vacant WBO World Super-Lightweight titles on Friday night (November 19) at the SNHU Arena in Manchester, New Hampshire, live worldwide on DAZN.

Reis (18-7-1 5 KOs) was in London and working on the DAZN broadcast as Chantelle Cameron booked her spot for a 2022 undisputed fight at 140lbs with victory at The O2 over Mary McGhee, and now Reis and Camara (8-2) battle to meet the Briton for all the marbles.

Reis didn’t just travel to watch the bout though, getting plenty of sparring in while across the pond as she moved towards the end of her camp for her eighth World title bout in a 26-fight career to date.

The 35-year-old, who wrote and starred in a feature film titled Catch the Fair One, is eager to land the undisputed title in double quick time as she looks to achieve as much as possible in the game before pursuing more work in the film industry – but ‘Mequinonoag’ says that can wait as she eyes being the star attraction on Friday night and setting up the Cameron fight in style.

“Jessica hasn’t been at 140lbs or in the rankings as she’s been at 130lbs and 135lbs,” said Reis. “But she’s coming in off an excellent win against Heather Hardy, one of the pioneers of women’s boxing in this era, whose only loss was to Amanda Serrano who is one of the best to ever do it – so she’s dangerous, I know that.

“She’s improved from her loss to Melissa St. Vil too so I don’t overlook any opponent, and this is boxing, anything can happen. I commentated on her last two fights, and I give huge respect to her for stepping up and taking this opportunity, as there’s a lot of fighters out there that want to pick and choose fights and not step-up, but Jessica has stepped up so respect to her for that and she’s here for a reason, she wants to become undisputed too.

“She’s a lighter fighter coming up so she’ll have hand speed and fast feet, she doesn’t have as much pressure in a way as I have the titles to defend so maybe the pressure is off her, but as I said when I commentated on her, she has the composure of a veteran, it’s amazing, she had a huge hematoma on her head from the first round against St Vil and she didn’t bat an eye at that and against a legend like Hardy, she did her job, she’s very composed, she has great fundamentals and fast hands.

“I was in London to train but I am in this tournament, so my eyes were wide open for that fight. I was there to see potential opponents live and it was better being there, seeing them at the presser, the weigh-in and around the hotel, the whole energy around the event. We’ve been talking about fight Chantelle for a while now and it was a dream fight for fans in the US and UK. I like how she carries herself and to see her in person was great, she was nothing short of what I expected, she’s a delight to be around and she’s a very determined fighter, and you feel her energy when you are around her.

“Chantelle is a really good boxer and has that killer instinct that you cannot teach. She did what I thought she would do, and it was a great performance, but everybody is beatable including myself, I saw a lot but ultimately, she got the job done in good style.

“I spent a good week in London, we trained and sparred, Noel Callan, Hannah Rankin’s trainer, hooked us up and I think we had 40 rounds in three days, so we definitely got that work in! It’s becoming a regular trip, it’s the third time this year that I’ve been to the UK ahead of fights, it makes sense as you get the quality work over there.

“My Native American name is ‘Mequinonoag’ which means ‘many feathers’ or ‘many talents’ and my mother named me correctly, I’m blessed to have this personality where I am fascinated by art and storytelling and all aspects of life, and I don’t see just one path, your journey has many, many paths.

“So the acting and storytelling came to me and I am definitely going to explore it and see what kind of ‘World championships’ I can get in that world too, so you will definitely see me on the big screen again because boxing is a short career and while I have more to do in the sport, it’s a brutal one and I don’t want to outstay my welcome, so when the time comes to gracefully bow out I want to have my wits about me so I can do all these other things after boxing.

“Demetrius and I have known each other since we were young, we’re two Cape Verdean kids from Rhode Island. He started fighting way before I did, and I saw him as a teenager going to do great things as an amateur and we have trained together lots and we have the same strength and conditioning coach. We know each other very well, he’s my brother from another mother and it’s so awesome that we are finally fighting on the same card.”

Deron Williams On Fighting Frank Gore- “You Miss Competing”
Luis Ortiz-Charles Martin Headline New Year’s Day PPV
Advertisement
To Top
We use cookies to ensure that we give you the best experience on our website. If you continue to use this site we will assume that you are happy with it.OkPrivacy policy