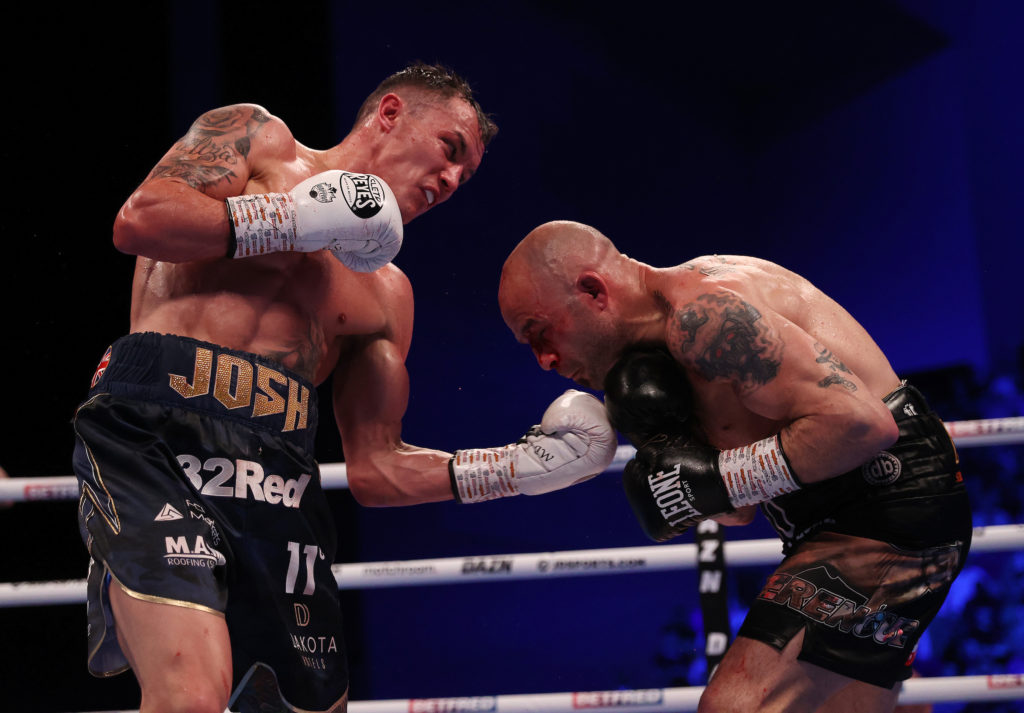 Josh Warrington wanted to put together a great performance Saturday night in front of his hometown fans, and he delivered to become a world champion, again.

In a wild slugfest main event for Matchroom Boxing, the former IBF World Featherweight champ  Warrington got his title back with a sensational seventh-round TKO over veteran champ Kiko Martinez.

Some big fights and nights ahead 💯 pic.twitter.com/en3TzjOgFE

Fighting in front of roaring capacity crowd at the First Direct Arena, Warrington scored a first-round knockdown of the Spaniard Martinez and was the more aggressive, harder punching fighter as the bout wore on.

The 31 year-old, who had previously lost his championship to Mexico’s Maurico Lara on a 9th round TKO in February of 2021, was not going to be denied on this night out-landing the champion Martinez nearly three to one.

The fight was out without some controversy, early. This, as Warrington, now 31-1-1, 8 KOs, opened up a nasty gash with head on the inside of Martinez’s left eye socket right by his nose. That bled profusely from then on throughout the remainder of the bout and was definitely a factor. Warrington wasn’t so much as warned for the clash of heads.

Meanwhile, Martinez, now 43-11-2, also suffered a cut in the corner of his right eye in the third round of the fight that was also bled on and off as the fight continued.

The dangerous champion was occasionally able to land hard right hands on Warrington. That’s the same punch that won him the title when he kayoed Kid Galahad last November to become the IBF 126 lb. titleholder.

But, Warrington was undaunted and continued to get the better of the action on the inside with huge combinations throughout the fight.

The end came in the seventh round when Warrington staggered Martinez back along the ropes and landed more than 10 unanswered punches before referee Marcus McDonnell stopped the fight at the 2:12 mark. Warrington leaped into the air and then, went head over heels in a somersault in the thrill of victory.

Martinez could only walk warily back to his corner, as a bloody mess having lost his championship despite a valiant effort and taking lots of punishment.

In the co-feature bout in Leeds, Australian Ebanie “Blone Bomber” Bridges became a world champion for the first time capturing the IBF Ladies Bantamweight title with a 10 round unanimous decision over Maria Cecilia Roman of Argentina. Bridges, who previously lost a world title bid to England’s Shannon Courtneay in April of last year, was busier and more effective on the inside throughout winning by scores of 100-91, 97-93 x 2.

The 35 year old Bridges, who was previously a ring card girl in fights in Australia before taking up the sport as a fighter years ago herself, won a world championship in just her ninth professional fight.