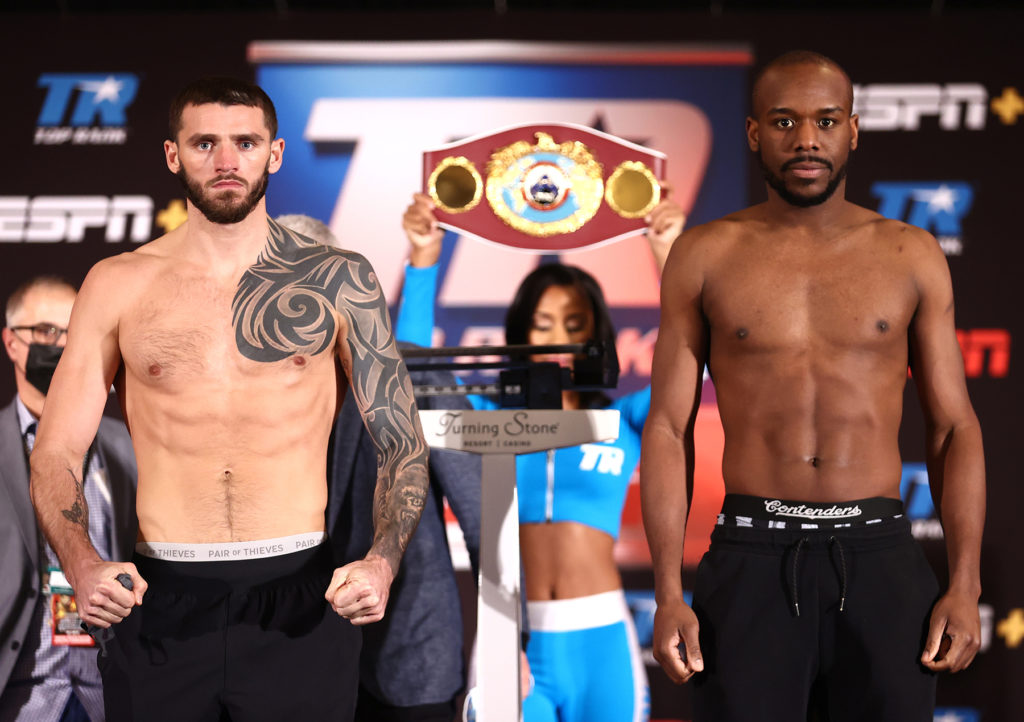 This will conclude a roller-coaster of postponement and cancellations for the 32 year old Smith’s attempt to walk to the ring as champion. That has included Smith, 27-3, 21 KOs testing positive for Covid-19 last Fall, thus, delaying his intital title defense against England’s Callum Johnson.

Next, Johnson contracted Coronavirus late last week which nixed him from being able to challenge Smith and once again threatened Saturday night’s Top Rank/ESPN main event. Enter Florida’s Geffrard, who was a willing and able substitute and is taking the fight on just eight days notice.

“I can’t wait to be on ESPN this Saturday defending my world title in front of the whole world. I’m extremely happy to be here. There were a couple of moments where I thought I wasn’t going to be here. I can’t wait! Thanks to everyone that made this happen,” Smith told the media at Thursday’s final press conference.

Smith has certainly come up the “blue-collar way” having to work a full-time job with his landscaping company in Long Island, New York before establishing himself as a world title contender. Smith lost in his first world championship challenge in the very same arena where he will fight Saturday night. That’s when WBA World Champ Dimitry Bivol dominated him in March of 2019.

However, Smith regrouped and scored an impressive KO of Eleider Alvarez in the Top Rank “Las Vegas bubble” in August of 2020. Next, he defeated Russian Maxim Vlasov in Tulsa, OK, for the vacant WBO World title in a narrow decision last April.

Geffrard said Thursday, “I was in the sauna ( readying for another fight last Friday) when I got the call for this fight. I was looking forward to Smith vs. Johnson, but now I’m the one fighting for the title. It’s surreal.”

Yes, it’s taken awhile, but Joe Smith Jr. is about to take the main event stage, as a world champ. And, now, we’ll see what he can do with it.