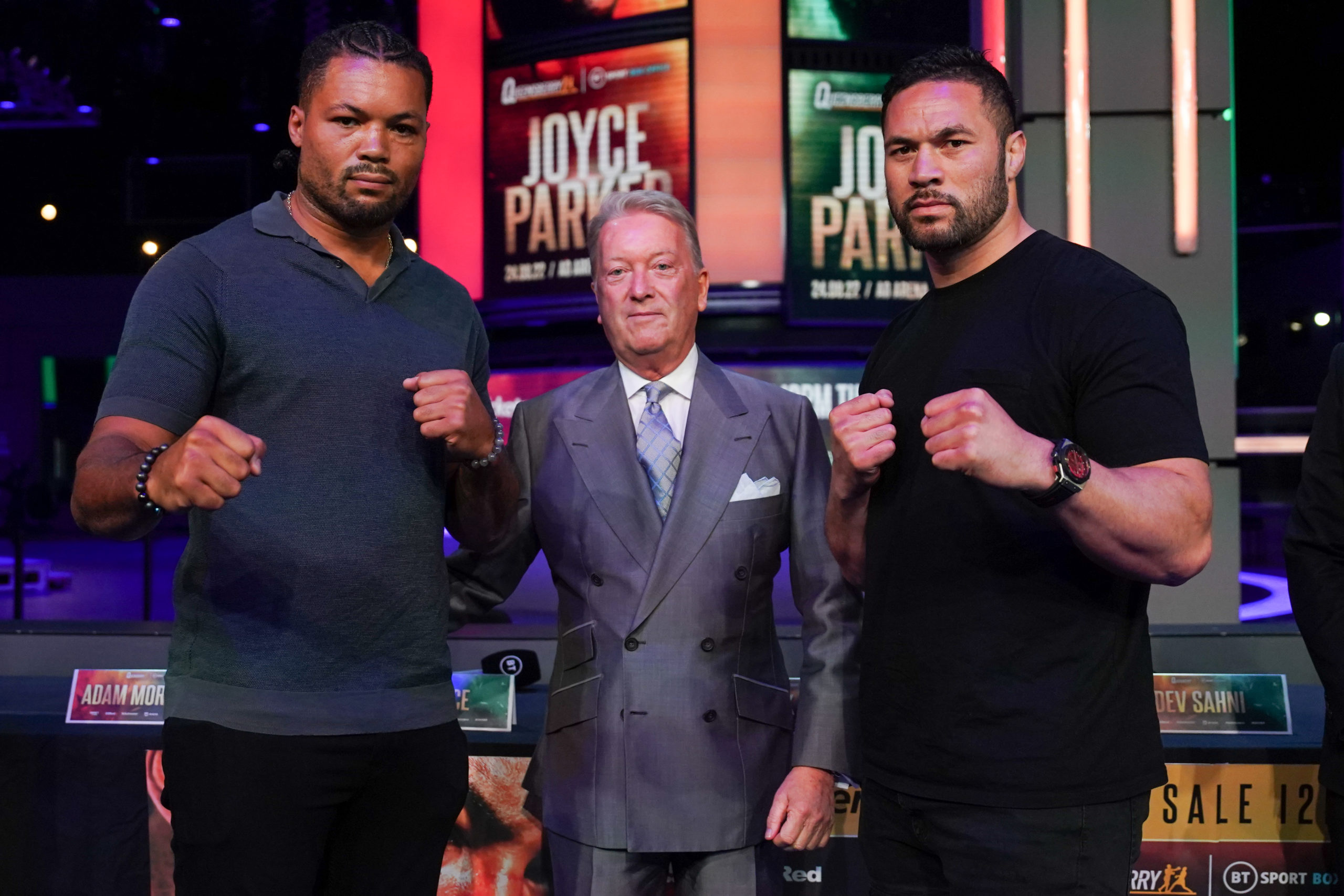 Joe Joyce and Joseph Parker will square off in a highly significant heavyweight fight on Sept. 24 at AO Arena in Manchester, England, promoter Frank Warren of Queensberry Promotions announced at a news conference in London on Thursday.

The winner of the 12-round fight dubbed “Nowhere To Run” will be the mandatory challenger for the winner of the Aug. 20 rematch between unified titleholder Oleksandr Usyk and former two-time titlist Anthony Joshua.

Joyce-Parker will headline a BT Sport Box Office pay-per-view event in the United Kingdom. Contracts are in the process of being finalized for it to stream on ESPN+ in the United States, a source with knowledge of the deal told Fight Freaks Unite.

“This is a fantastic fight that really keeps the heavyweight ball rolling,” Warren said. “It has proved to be a little while in the making, but this is a match between two in-form and quality heavyweights fighting to be first in the queue for a world title shot. It is one the fans want to see, so I am delighted to be taking this blockbuster fight to Manchester, the biggest indoor arena in the country, which we want to see packed to the rafters.”

In April, during the Tyson Fury-Dillian Whyte undercard, Joyce and Parker posed for photos and Warren said the plan was for them to meet in July. However, Parker then signed with Boxxer, which has a deal with BT Sport rival Sky Sports, leaving questions as to whether they would be able to make the fight.

When Joyce-Parker did not happen in July, Joyce (14-0, 13 KOs), 36, of England, returned from a year-layoff due to a wrist injury and knocked out journeyman Christian Hammer in the fourth round on July 2.

After the fight, Warren said Joyce would be return on Sept. 24 but it remained to be seen if the fight with Parker could be made. Eventually, Warren and Boxxer CEO Ben Shalom were able to work out a deal under which it would be done with BT Sport, which has a deal with Warren for Queensberry events.

“Joseph Parker is obviously a well-known and highly respected fight figure over here in the U.K., both for his exploits in the ring and him working alongside Tyson Fury (in training camp),” Warren said. “He also looks a greatly improved heavyweight since teaming up with (trainer) Andy Lee and his defeat of Dereck Chisora last time out was a comprehensive one.

“This is the perfect test of big Joe’s world championship credentials and victory over Parker would propel him into the top echelons of the division and right in the mix with the likes of Tyson Fury and Oleksandr Usyk.”

The fight with Parker is one that Joyce has wanted.

“This fight has been a long time in the making,” said Joyce, the 2016 Olympic super heavyweight silver medalist. “Parker realized he had nowhere else to go and eventually had to take this fight. No. 1 versus No. 2 (in the WBO rankings). The winner goes on to fight for the world title. It’s going to be a cracking fight and you will see why he tried so hard to avoid me.”

Former heavyweight titlist Parker (30-2, 21 KOs), 30, of New Zealand, has won six fights in a row since back-to-back decision losses to Joshua in a world title unification fight in 2018 followed by a close decision loss to Whyte later that year. Parker is coming off back-to-back decision wins over Chisora, most recently in December, also at AO Arena. That was Parker’s final fight with Matchroom Boxing.

“Fans in Manchester will see the very best of me. Joe Joyce will see exactly why I will become the heavyweight champion of the world again with Boxxer,” Parker said. “I am working hard with my trainer Andy Lee. Everything is going smoothly and I truly feel great. I have waited patiently to get this fight on and let me tell you now — the ‘Juggernaut’s’ journey ends right here. He has nowhere to run.”

Said Shalom: “The fans have waited for this one and so has Joseph. It provides him with the perfect opportunity to realize his world title ambitions. He has rightly earned a reputation as one of the most respected heavyweight fighters on the planet and I am confident he will soon become a world champion again. Joe Joyce might be ranked No.1 by the WBO, but he is seriously in for the toughest night of his career.”