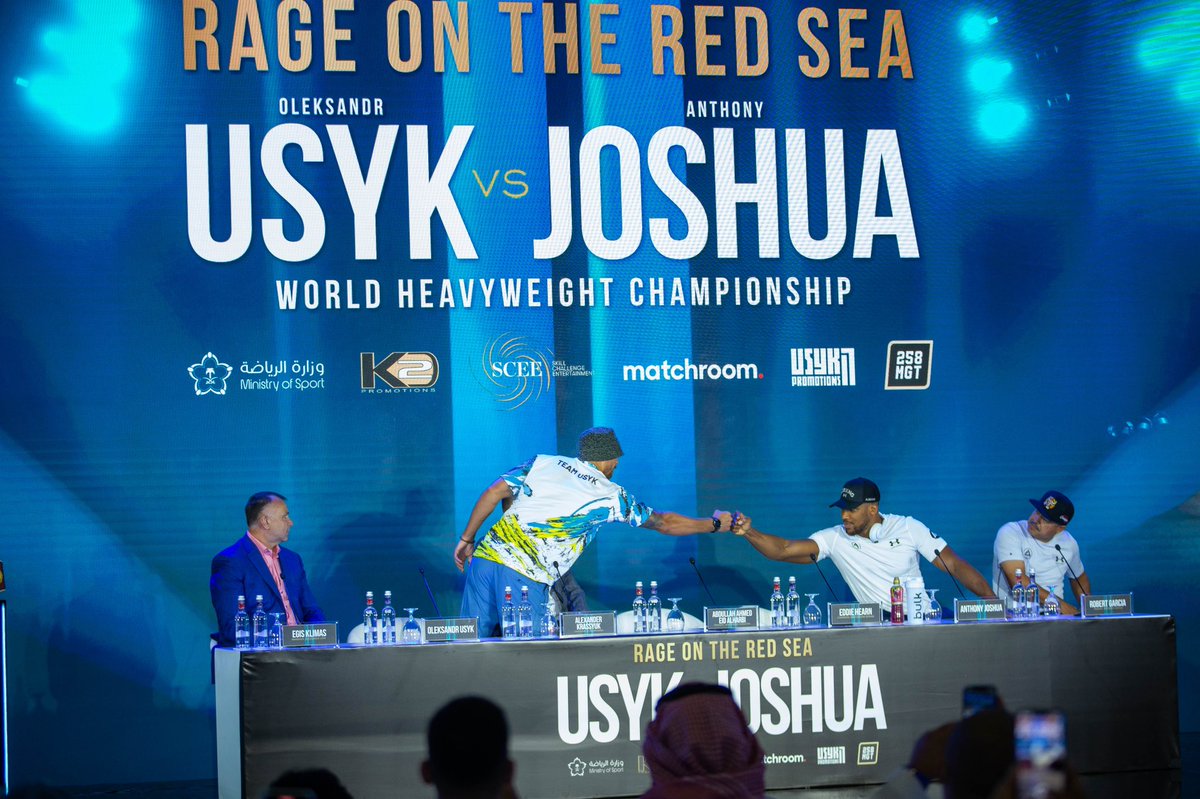 With the backdrop of their rematch the riches of Saudi Arabia, unified Heavyweight Champ Oleksandr Usyk and former champion Anthony Joshua started the promotion of their upcoming August 20th bout in the Middle East Tuesday afternoon.

And, while there were plenty of smiles from the fighters, their teams, Matchroom Boxing and promoter Eddie Hearn, as well as Saudi Organizers of the event, there was also acknowledgement of the unbeaten champion Usyk’s difficult situation back in his homeland of Ukraine. This, as his country remains under attack from neighboring Russia over the past four months.

“As we all know, we (Ukraine) are not in the best conditions at the moment back at home,” Usyk told the media and guests. “But, we are doing what we have to do. We are doing our job. Together with my team. We are working hard to achieve our goals.

“I never made some very loud and bright speeches. All I did is just work hard in my training camp in my gym. That’s what I’m gonna do until the date of the fight. And then, I will enter the ring and make you happy with my boxing.”

It was the second time in just over two years that Joshua (24-2, 22 KOs) had lost his WBA/IBF/WBO world heavyweight titles. The first was to American Andy Ruiz in a shocking TKO defeat at Madison Square Garden in June of 2019. Joshua regained the titles in the same coincidental location, Saudi Arabia, on a 12 decision over Ruiz six months later.

For the Englishman, he knows that the rematch challenge is a pivotal moment for the rest of career.

“The great thing is I’ve got a second chance,” Joshua said Tuesday. “If you know me, and my story, you now I’m the “Comeback King.” You can put me down, but it’s difficult to keep me down, because I always keep my spirits high…. I know that through my tough times, everything will make sense in the long run.”

Joshua certainly hopes so, as a loss in the rematch will finish his short term leverage for an undisputed title fight with WBC champ Tyson Fury and that will instead go, once and for all, to Usyk, instead.

Now, we start the countdown to August and the next piece to the “undisputed heavyweight puzzle.”

Perpective From New York On Beterbiev Win/Top Rank Undercard
Brandon Figuerora Back On Magsayo-Vargas July 9th Card
Advertisement
To Top
We use cookies to ensure that we give you the best experience on our website. If you continue to use this site we will assume that you are happy with it.OkPrivacy policy