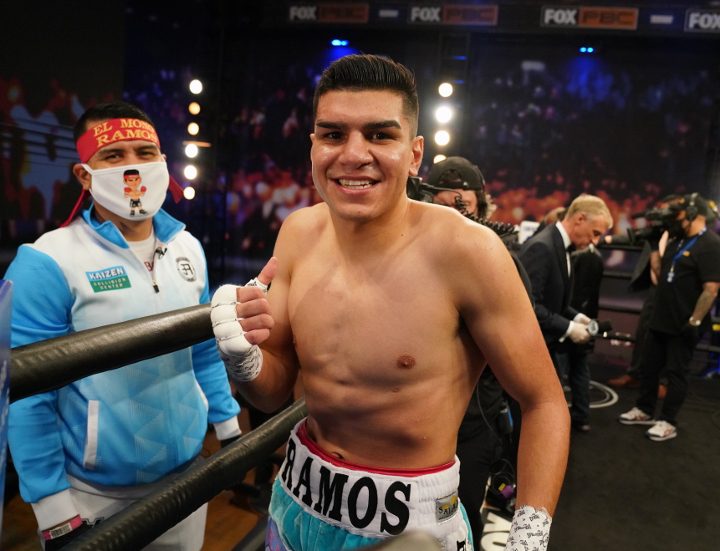 Jesús “Mono” Ramos Jr. will take on super welterweight contender Brian Mendoza in a 10-round showdown that headlines FOX PBC Fight Night and on FOX Deportes Sunday, September 5 from The Armory in Minneapolis.

Tickets for the event, which is promoted by TGB Promotions and Warriors Boxing, are on sale now and can be purchased at The Armory at and through Ticketmaster.

“Jesús Ramos is primed to breakthrough into the next level of boxing’s rising stars and will look to make big steps towards his goal in a tough test against Brian Mendoza,” said Tom Brown, President of TGB Promotions. “The fantastic fight fans at The Armory in Minneapolis will be in for a night loaded with young rising stars from start to finish, as lightweight Starling Castillo and middleweight Armando Reséndiz step in for difficult matchups against Juan Carlos Burgos and Marcos Hernández respectively. Sunday, September 5 is going to be a can’t miss lineup of the action live in primetime on FOX.”

Ramos (16-0, 14 KOs), the nephew of welterweight contender Abel Ramos, has paved his way to stardom with highlight-reel KOs. Most recently, he dominated Javier Molina on his way to a 10-round unanimous decision victory in May. Prior to that fight, he had scored five-straight knockout victories following his only other pro fight that had gone the distance, which came in a June 2019 unanimous decision over Kevin Shacks. He has steadily increased the toughness of competition in 2020 and he has continued that trend in 2021 with Molina and now Mendoza.

“I’ve had a great training camp so far for this fight,” said Ramos. “I feel a lot stronger, a lot more mature and I feel like I learned a lot from my last fight that I’m implementing into this camp. I expect a tough fight from Mendoza. I’m sure he’s coming to win and to take everything I’ve earned, but I’m going to make sure he doesn’t. You have to tune in on September 5 because it’s going to be a good one!”

Mendoza (19-1, 13 KOs) earned a career best-victory in his last outing, beating veteran contender Thomas LaManna by unanimous decision in August 2020. The 27-year-old has fought professionally since 2014, with his only defeat coming by a narrow split-decision in November 2019 against Larry Gomez. Mendoza was born in Albuquerque, New Mexico, where he won two New Mexico Golden Gloves Championships as an amateur, and currently fights out of Las Vegas.

“I’ve been grinding in the gym nonstop preparing for an opportunity like this,” said Mendoza. “I’ve been learning a lot and I believe that it’s time for the world to see the fighter I’ve become. I can’t wait to put my skills on display. Don’t miss this fight on September 5, it’s going to be explosive.”

The 25-year-old Castillo (15-0, 12 KOs) scored an emphatic knockout in his U.S. debut in July, blasting out then unbeaten Miguel Contreras in the second round. A native of Santo Domingo, Dominican Republic, Castillo turned pro in 2017 and has delivered knockout wins in his last four fights heading into September 5, with three of those stoppages coming in 2021.

“I am very honored to be fighting on a great platform like FOX,” said Castillo. “It’s humbling to perform under the bright lights and I can’t wait. My team and I have been working very hard and we are laser focused on Burgos. We’re going to be prepared for anything he tries to throw at me on fight night.”

The Tijuana, Mexico native Burgos (34-5-2, 21 KOs) has faced an impressive resume of top fighters throughout his extensive career, dropping world title bouts to Mikey Garcia and Hozumi Hasegawa, in addition to a draw in a 130-pound title tilt against Roman Martinez. The 33-year-old ended up on the short end of decisions in challenges of unbeaten champion Devin Haney in 2018 and undefeated Hector Tanajara in January 2020. Most recently, he dropped a decision to unbeaten contender Xavier Martinez in May.

“This fight is mine for the taking,” said Burgos. “Training is going great and everything is on track for fight night. My sole focus is to win and make Mexico proud, while proving that I am still the real deal.”

The 22-year-old Reséndiz (12-0, 8 KOs) made a successful U.S. debut in April, earning a decision victory over Quilisto Madera. Fighting out of Nayarit, Mexico, Reséndiz entered the Madera fight having won eight consecutive fights by knockout, including five in 2019 before he stopped Joaquin Murrieta in his lone 2020 outing.

“Since my last fight, all I keep thinking about is how I’m going to be a more polished fighter when I step back in the ring,” said Reséndiz. “Now it’s time to show everyone that I’m the next big boxing star to come out of Mexico. Hernández is a durable fighter who has been in the ring with some top level fighters, but he’s never been in the ring with a puncher like myself. I have plans to stop him and send a message to all the fighters in my division. I want to thank my promoters Warriors Boxing and Boxing Major League for this opportunity. I’m going to make sure the world knows my name after this fight.”

Fighting out of Fresno, California, Hernández (14-4-2, 3 KOs) has faced excellent competition in his career, battling a litany of tough fellow rising contenders. The 28-year-old has twice faced former unified super welterweight champion Jeison Rosario, fighting to a draw in their first meeting before losing the rematch. He has taken down then-unbeaten fighters in Kevin Newman and Thomas Hill, and most recently fought to a draw against Brandon Lynch in January.

“I know that I’m facing a tough fighter, but I believe that I’ve faced better competition than what Reséndiz brings,” said Hernández. “I’m training hard for this opportunity and I’m glad to be back in the ring. Fans can expect action in this fight. Our styles are definitely going to mesh and make for a memorable fight.”