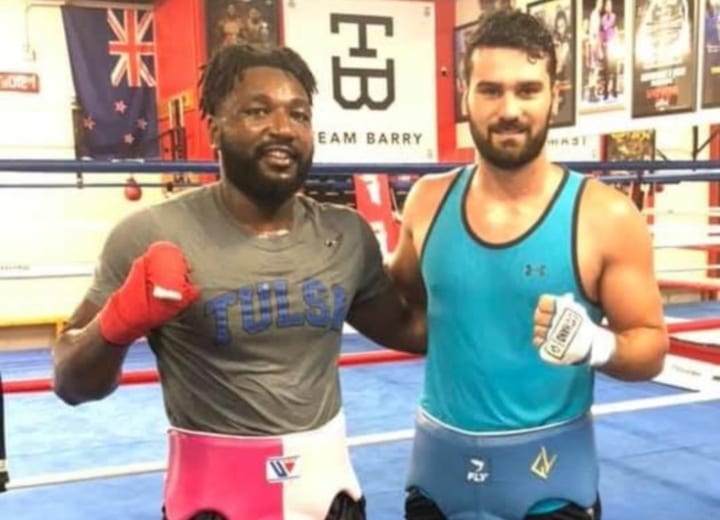 Jeremiah Milton Gets Ready for Pro debut sparring with Vianello

Have you heard of Heavyweight Jeremiah Milton? Well, you are about to soon enough.

Milton recently moved from his hometown of Tulsa, Oklahoma, out to Las Vegas. And, he has been sparring undefeated 2016 Italian Olympian, Guido Vianello (7-0, 7 KOs), in preparation for his highly anticipated pro debut, which is tentatively scheduled for August 2020.

The big puncher Milton, who is singed under management with Victory Sports & Entertainment, has been in the ring with the likes of 2016 Olympic Silver Medalist Joe Joyce (10-0, 9 KOs), as well as other top heavyweights who have trained in Las Vegas.

Boxingscene.com had more from Milton and the anticipation of him beginning his pro career,

“I love sparring the best heavyweights in boxing,” said the 26-year-old amateur stand-out who was a silver medalist at the Olympic Trials and won the Western Qualifiers in 2019. “There is no other city like Las Vegas where you can get the best sparring that boxing has to offer. Guido Vianello is an exceptionally talented fighter and I’m learning a lot by sharing the ring with him. I’m proud to represent my city Tulsa, Oklahoma amongst the best in boxing.”

Jeremiah Milton Gets Ready For Debut By Sparring With Guido Vianello https://t.co/wM0ov8Skkg pic.twitter.com/3FdPG2p9gN

“Jeremiah is learning how to adjust to different styles and Vianello is a very powerful puncher so the work he’s getting is incredible,” said Mike Leanardì, CEO of Victory Sports & Entertainment. “We are looking to have Jeremiah make his pro debut in August if everything plays out perfect. Those details will be announced when we finalize his opponent and the promoter gives us the green light that his show is happening.”

“We knew that Jeremiah’s move to Las Vegas was going to be the key factor for him to become the best possible fighter,” said Rick Torres, of Victory Sports & Entertainment. “Sparring guys like Guido Vianello and Joy Joyce can’t happen in any other city. We are pleased with what we are seeing in these sparring sessions.”

Vianello himself has been in action inside the Top rank “Bubble Shows”, as he was victorious in a first round stoppage over Don Haynesworth back on June 9.