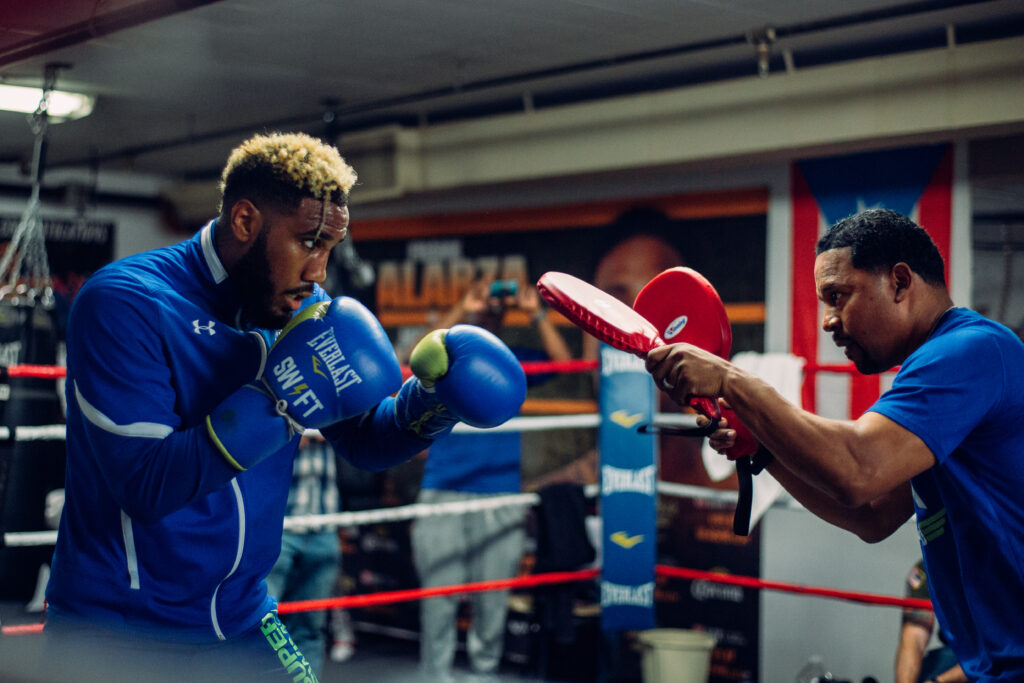 Unified and undefeated IBF and WBA 154-pound champion “Swift” Jarrett Hurd held a media workout at his gym in Temple Hills, Maryland on Tuesday as he prepared for his hometown return in a title defense against Julian “J-Rock” Williams Saturday, May 11 that headlines Premier Boxing Champions on FOX and FOX Deportes from EagleBank Arena in Fairfax, Virginia.

Here’s what Hurd said to the media at the workout last Tuesday.

“We always work on different things in camp, whether it’s preparing for southpaws in the past or orthodox in this fight. You have to do everything to your right as far as movements against an orthodox guy so we made the transition to that for the last couple of camps starting with the Jason Welborn fight.

“I want to be undisputed champion at 154-pounds. The plan is to go after the WBC belt next. I’m inspired to do it and I see it right in front of me.

“I feel strong and the shoulder is 100 percent. In sparring and hitting the bag, I forgot I even had surgery. That’s how good I feel.

"I want to be undisputed champion at 154-pounds. The plan is to go after the WBC belt next. I'm inspired to do it and I see it right in front of me." — Unified 154-LB Champ @Swift_JHurd, who held a media workout ahead of his May 11 @PBConFOX bout.

“I’ve watched some of Julian’s recent fights and his last two fights have been on the same cards I’ve been on. It’s almost like it’s meant to be. We were lining up to face each other and here we are.

“My defense is getting better, but what people have to understand is that I kept stepping up the competition I was facing. So of course I got hit more, but if you look at the stats, my opponent got hit even more than me. Because of my style it looks like I take a lot of punches. I expect to get hit in this fight but, I’m ready to hit him more.

“I always said that one day I wanted to be the guy who when I got to this position, would give back to the area here. I want to be the face of the DMV (D.C.-Maryland-Virginia). When you come here and talk about boxing, you’re talking about me. I’ve got the city behind me and I couldn’t be any happier about it.”