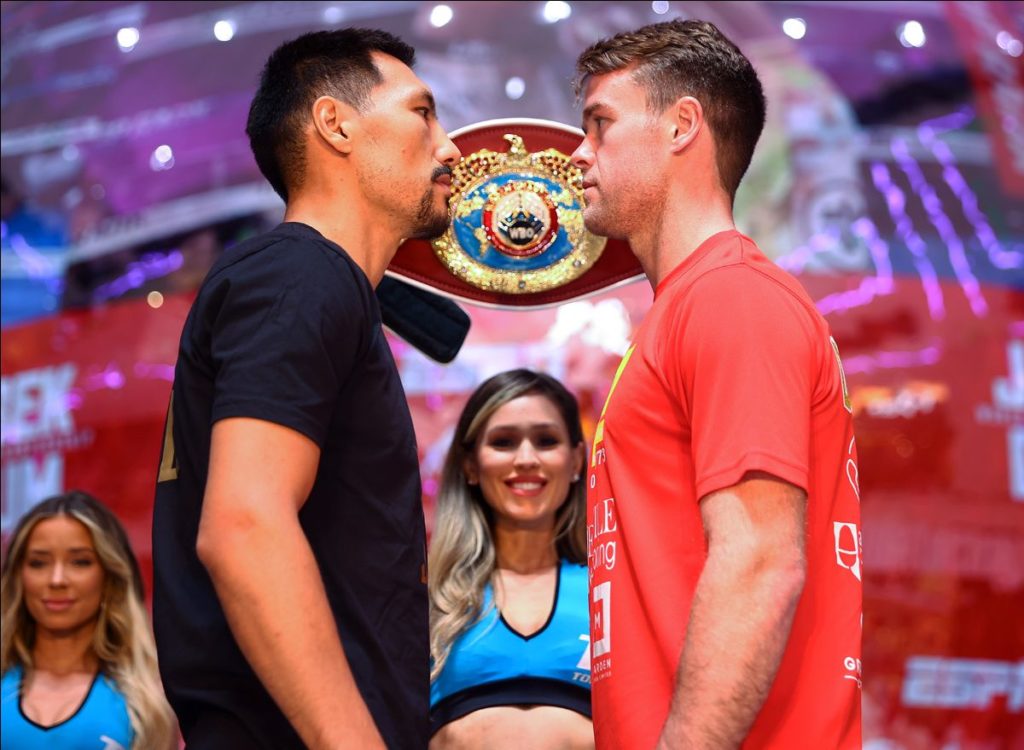 Coming up Saturday night, Kazakhstan’s next middleweight star, Janibek Alimkhanuly finally gets a chance to win a world title belt, albeit a secondary one, this Saturday in Las Vegas. That’s when he takes on fellow unbeaten contender Danny Dignum of England for the vacant WBO Interim middleweight championship.

Janibek (11-0, 7 KOs) is a 2016 Olympian who broke through in 2021 with knockout victories over former world champions Rob Brant and Hassan N’Dam. Dignum (14-0-1, 8 KOs), from Essex, England, has been the WBO European middleweight champion since knocking out Conrad Cummings in November 2019.

WBO Interim Middleweight title is up for grabs 🏆#JanibekDignum | MAY 21 | ESPN pic.twitter.com/ne83aYOwX8

As for Alimkhanuly, he said Thursday afternoon to the media,

“I am very happy that this young man took this fight. We’re going deliver a very good fight for the audience. I think I’m one of the most avoided fighters. And I think in the future, many are going to continue to step aside. Many will not want to face me in the ring.”

“I respect him very much for taking this fight. He is a good fighter. He has a good record. He is 14-0. He has a good amateur career. But when we step in the ring, all the respect is going to go away. It’s boxing.”

Hear Dan Rafael and me previewing this weekend’s action in Vegas and elsewhere on the latest “Big Fight Weekend Preview” podcast by clicking play below:

“This is what I’ve dreamed of since I was nine years old when I first started boxing. I’m so pleased that the other fighters didn’t fight him because now it’s going to be my opportunity to fight him. He’s a very good fighter. I’ve prepared well. I’ve done everything possible to give myself every opportunity, and I’m ready to take it.”

“I’m pleased the other fighters didn’t take this fight because otherwise I wouldn’t be sitting here now with the opportunity to box for the interim world title. The opportunity came up, and I just said yes straight away. I’ve boxed to try to prove myself, and now I’ve got the opportunity, and I’ve grabbed it with both hands.”

“You’re going to see a good performance from me on Saturday. I’m going to cause a big upset. I’m going to gain a lot of fans. I’m looking forward to that.”

As for the former 130 lb. champ Herring, he’s back for the first time, since his title loss in a Super Featherweight unification bout late last year to Shakur Stevenson.

“I’m just happy to be back in the ring. Jamaine is basically the only one that stepped up. You got to give him that respect. I’ve got nothing against anyone else. Richard Commey was a name that was thrown at us. But he’s moving up in weight. Robson Conceição was another name thrown at me. We were supposed to set up a match against Miguel Berchelt as well, but you see how that played out.”

“But I don’t complain. I don’t fuss. I really don’t give Top Rank or anyone an issue about who I match up with as long as it’s a fight that people want to see and it makes sense, then I’m all for it.”

Continue Reading
Advertisement
You may also like...
Related Topics:Featured

Why Did Ryan Garcia-Issac Cruz Get Undone So Quickly?
Canelo-Bivol Pay-Per-View Performs Poorly
Advertisement
To Top