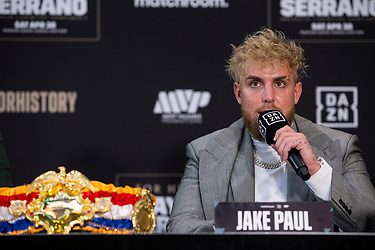 With all of the championship fight cards being announced and scheduled for this Summer, it’s no surprise that Youtube/social media star Jake Paul wants back in the limelight. And, Friday Paul showed video of him being back in the gym and gave the first indication of when that will be.

Paul, who’s won four fights to start his boxing career, but all against non-boxers that were smaller and or lighter than him, posted this on Instagram Friday,

“August I’m back baby. Let’s get it,” Paul said to the camera after completing punching of the pads. And with that, let the speculation continue on when we’ll see him in the ring and against whom?

When last we saw the former actor who has millions of followers on social media, he was victorious with one mighty right hand in his rematch in a Showtime Boxing PPV win over former UFC champ Tyron Woodley in December.

The bout in Tampa, FL, was a short notice rematch of Paul’s decision win over Woodley last August. This, after Paul’s original opponent England’s Tommy Fury withdrew citing injury/illness. Woodley took the fight on just over two weeks notice and had been competitive up until Paul knocked him unconscious before he fell face first to the canvas.

With Paul having fought three times from May-December of last year, although one of those was a one punch KO of former amateur wrestling star Ben Askren, it was believed he would return by May-June of this year.

One hold-up may be the outlet where Paul wants his fight/PPV to happen? And, another clue on that is the fact that Showtime Sports President Stephen Espinosa admitted last week that they don’t have a future agreement at the moment with Paul after the two fight PPV deal with Paul concluded last December.

It doesn’t look like Triller, who broadcasted his first two bouts, has much intention of holding any expensive boxing PPV’s, as they haven’t put one on since the Paul-Askren one in Atlanta in May 2021.

Out of the ring, Paul and his “MVP Promotions” are part of publicizing  the upcoming Katie Taylor-Amanda Serrano Ladies Undisputed Lightweight title bout at Madison Square Garden in New York April 30th. For her part, Serrano was training with Paul and his brother Logan and also posted on social media,

I’m showing @jakepaul I can move some weight. Disregard the street sign behind us..it should say Big Chicks only 🤫😂🤣#MVP pic.twitter.com/9PtSjPBagf

So now, we’ll wait for whether Paul will fight a more credible opponent and where?