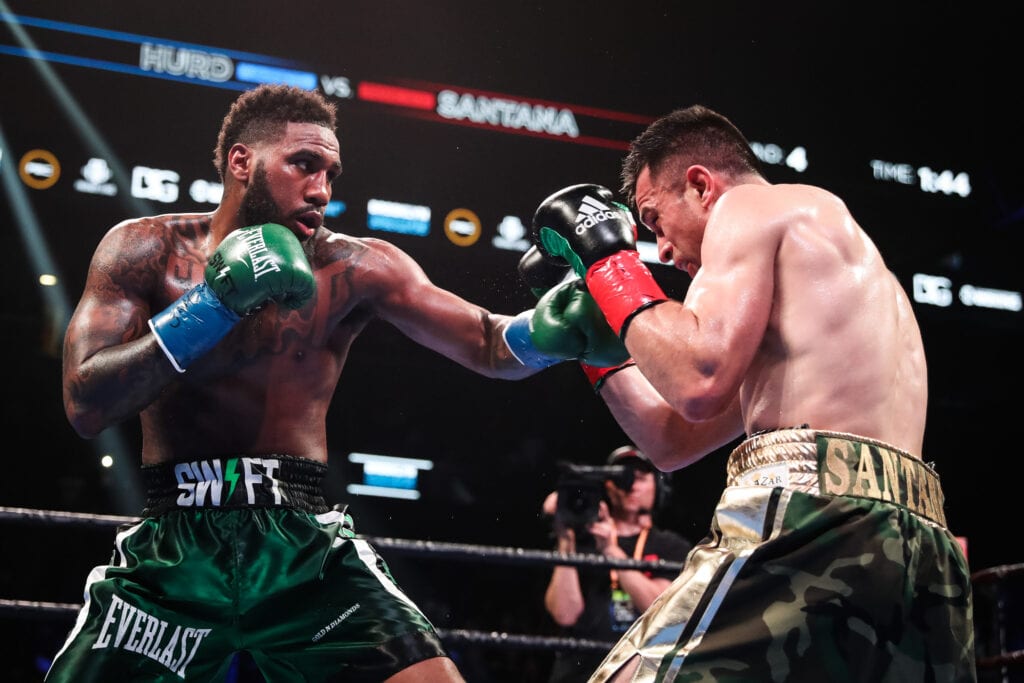 Former Unified Junior Middleweight champion, Jarrett Hurd, was successful in his comeback fight Saturday night after losing his belts last Summer. Now the question is: what’s his next move and does it possibly involve WBC 154 lb champ, Jermell Charlo?

More on a future opponent in a moment.

First, as our Marquis Johns wrote, Hurd was solid, but not spectacular getting an easy 10-round decision over Francisco Santana in their 10-round non-title bout Saturday night in Brooklyn, New York.

It was Hurd’s first fight, since his upset loss to Julian “J-Rock” Williams in May of last year. Williams floored Hurd for the first time in his professional career early in the fight and then, shocked him as being stronger, as the fight went on in nabbing a 12-round decision win to take Hurd’s WBA and IBF belts.

In Saturday’s win, Hurd dominated with his jab and at one point in the fifth round had Santana staggered but couldn’t put him down, much less finish him. Hurd finally got a knock down in the final seconds of the tenth and final round with a barrage of punches, but the bell save Santana for the decision.

This was the first fight for Hurd with his new trainer Kay Koroma and they had decided not to rematch J-Rock Williams immediately, but rather take this fight first.

And wouldn’t you know it, as sometimes happens in “the sweet science,” J-Rock was upset himself by little-known Jeison Rosario by 5th round TKO two weeks ago. Williams and Rosario have an automatic rematch clause, so those two will be fighting again later this summer.

And, that brings us back to Hurd’s options, which appear to be fairly simple at Junior Middleweight. That’s: take on fellow PBC fighter, Jermell Charlo, who just regained his WBC title in the 154 lb. division in December.

Charlo had suffered his first loss of his career at the hands of Tony Harrison 13 months ago, and similar to Hurd, fought  a non-title tune-up fight last summer before the Harrison rematch. That’s when Charlo knocked out Jorge Cota with one punch in the third round.

Charlo then avenged the defeat to Harrison scoring a 12-round decision in recapturing his WBC title.

Further, Charlo has a previous knockout win over J-Rock Williams earlier in his career and also has victories over Erislandy Lara and Austin Trout, previously.

So, it seems that short of Charlo or Hurd being able to fight J-Rock or Rosario next, which they can’t, the most attractive fight is against each other.

That’s because, the WBO is not recognized by Premier Boxing Champions and they never match make around any of their title holders or fights.

So that means the WBO 154 lb. champion, Patrick Teixeira, is not going to be an option for Hurd or Charlo or any of the other PBC fighter.

Interestingly, later this week Teixeira and WBO number one contender, Brian Castano, will have a purse bid for their upcoming title fight. Once that takes place, it is believed that those two will meet sometime in the next 90 days.

But, regardless of that fight, there’s really only one logical meaningful title fight that will be worth the most money and have the best sub-plots for both Hurrd and Charlo. And, that’s to fight each other later this summer.

Clearly, the winner of a potential Charlo – Hurd fight would be in position to fight the winner of Rosario – J-Rock, whenever that rematch happens later this year.

And, should J-Rock regain his unified titles, then a fight with Hurd would great intrigue as a rematch with him or with Charlo, if he’s beaten Hurd.

Davies prepares for McKenna with new trainer
Campbell-Fortuna come to terms for title fight
Advertisement
To Top
We use cookies to ensure that we give you the best experience on our website. If you continue to use this site we will assume that you are happy with it.Ok