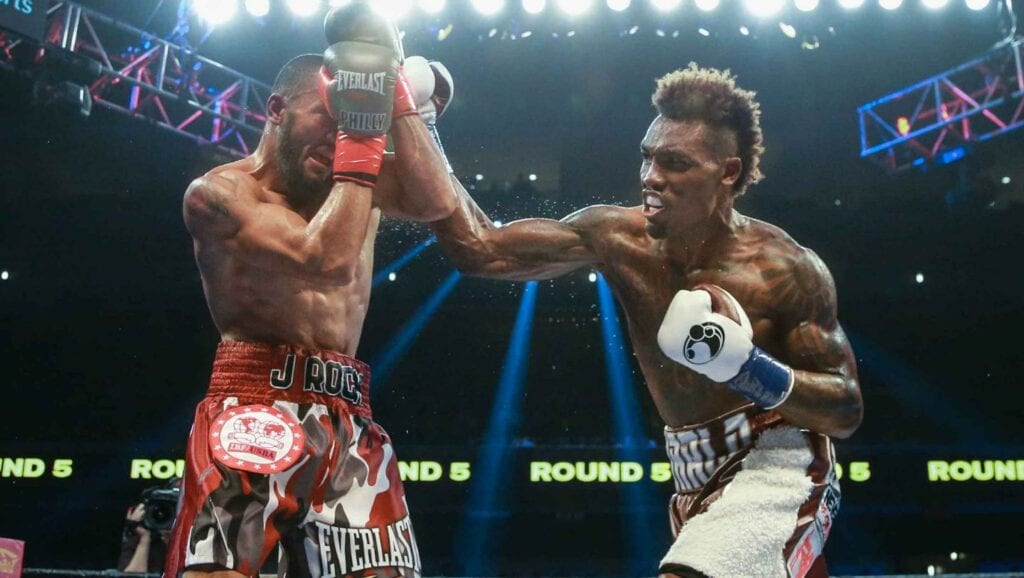 Former world champion Jermell Charlo and dangerous contender Jorge Cota talked about their upcoming showdown when they met for “PBC Face To Face” as they near their matchup this Sunday night that headlines FOX PBC Fight Night and on FOX Deportes from Mandalay Bay Events Center in Las Vegas.

FOX PBC Fight Night coverage begins at 8 p.m. ET/5 p.m. PT live on FOX and will see Charlo and Cota square off after WBC Super Welterweight Champion Tony Harrison suffered an injury that forced him to withdraw from his scheduled rematch against Charlo.

Cota will be looking to take advantage of the biggest opportunity of his career, while Charlo looks to secure the rematch with Harrison for later this year.

Here are some quote highlights from Charlo and Cota’s discussion on “PBC Face To Face” ahead of Sunday’s showdown:

Charlo on having his rematch with WBC Champion Tony Harrison rescheduled after Harrison was injured in training:

Charlo: “Unfortunately I had to make the decision to move forward after the injury. My decision was to take on whoever would stand in the way and be my next victim.”

Cota on his underdog status and what fans can expect from him:

Cota: “I think that many have called me the victim in the ring and the result has been that I became the monster. I am the demon in that ring. When other guys are in there, my punches scare them. I expect this fight will be the same. Jorge Cota is a demon and he’s the next man who will be fighting Tony Harrison for the WBC Super Welterweight World Title. I will have my hand raised on June 23. I have all the strength and desire to go forward. Many things have happened to me that I’ve overcome and I will not miss out on this opportunity.”

Charlo and Cota’s thoughts going face-to-face for the first time:

Charlo: “I don’t think he cares about skills, and skills pay the bills. This is boxing. It’s not about his history or his will. It’s not about anything else but who is the best man in the ring. I’m glad that I could bless another warrior with the chance to be here. This guy is going to be relentless. He comes to fight. I’m glad that he’s gone through what he has to get here. But the devil will be defeated, in all aspects of my life. I have the heart of a lion and I’ve paid my dues in this game. This is going to be the ‘Jermell Charlo Show’ on Sunday night.”

Cota: “Sometimes talent isn’t enough. It takes a combination of things to be great and obtain glory. It’s true that he’s built a career and he’s a good fighter. But he’s had the support to get here and I’ve had to grind for everything.”

Cota on the Charlo vs. Harrison fight last December on FOX:

Cota: “For me Harrison won the fight. He threw better punches and landed more shots. A lot of people thought Jermell had won, but I saw it for Harrison. Jermell is a good boxer. But I think that when he’s under pressure, he doesn’t know what to do. I’m going to put the pressure on him from the first bell.”

Charlo and Cota on what this fight will look like stylistically:

Charlo: “There are not a lot of fighters who think they can put pressure on and make it out against me. I’m talented and very smart. I’m different in the ring. Nobody comes forward against me. Tony Harrison never wanted to exchange. You look like you want to exchange, and I love it. That’s how you get the best Jermell Charlo.”

Cota: “I invite you to go in there and exchange with me. I’ll go ahead and stop at the center of the ring and go blow for blow. Charlo is a smart fighter and I have nothing against him. But right now, he’s in my way and I’m going to go through him.”

Cota on the motivation gained from seeing recent big upsets in the sport, such as heavyweight champion Andy Ruiz Jr.:

Cota: “Andy Ruiz and I were on the same card in April and he’s a great example for all boxers, not just Mexicans. He showed that he could beat the best and do it convincingly. I was very motivated after seeing that. If he can achieve it, I can also do that.”

Charlo on fighting an opponent who comes in as the underdog:

Charlo: “Cota is super dangerous. Everybody has a plan. I’m not here to play around in the ring. I’m going to be vicious. It may look one way right now to him, but when I’m standing in the ring, its’s going to be a whole different story. I chose Jorge because I believe we can make a great fight and excite the fans. I think I’m the best 154-pound fighter in the world and I’m hungrier than I’ve ever been.”

Charlo on not looking past Cota June 23 and ahead to marquee matchups in the division:

Charlo: “My focus is completely on Cota. I have a warrior in front of me. I have to get him out of the way. Then I’m going to get the victory I feel I already got, then go on to unify. I have to face everybody to prove that I’m the best.”

Cota on what this victory would mean to his career:

Cota: “I think a victory against Charlo would be the next step for me towards a world title. For my family it would be a way toward the next step of our lives. I have to go through Charlo to reach the next level that I’m chasing.”

Charlo and Cota on how this fight ends June 23:

Charlo: “If all goes as planned and if the referee doesn’t help him, he’s going to be out. I don’t predict the round. It’s going to be off his mistake. If you make a mistake, you will pay for it.”

Cota: “I cannot say exactly how it will end. I can’t see the future. But I can assure you that they are going to raise my hand. I will take the win.”